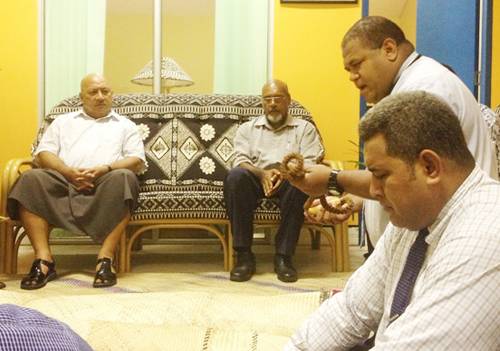 MSG revs up for leaders’ summit

The Melanesian Spearhead Group has become the focus of considerable activity in the lead up to the Leaders’ Summit in June, in spite of accusations from Fijian opposition leader Mick Beddoes that the organisation is ‘embracing dictatorship’. Fijian PM Bainimarama has suggested the group might assist with election monitoring in 2014. Vanuatu foreign minister Edward Natapei meanwhile visited Fiji to formally make amends for having slighted Fiji’s Voreqe Bainimarama in 2010. The West Papua National Council for Liberation (WPNCL) continued its membership campaign with visits to New Caledonia and Solomon Islands, an idea to which the membership seems to be warming. In a wide-ranging interview with PiPP, MSG chair Peter Forau underlined Sir Michael Somare’s ‘historic’ statement that the MSG is not an intergovernmental organisation, and admitted that there is a sense that the people of West Papua could find a place in the organisation. The vision of an economic union (discussed in the next item) was touted as well by outgoing chair Bainimarama.

In a move echoing Xanana Gusmao’s recent call for developing nations to invest among themselves, Papua New Guinea and Fiji announced their intention to work towards ‘a single market for the countries of the Melanesian Spearhead Group’. Supporting that statement is a FJD180 million investment by Fiji’s Provident Fund in PNG’s state-owned and struggling mobile telco, Bemobile, with management to be provided by Vodafone Fiji.

The U.S. Defence’s fiscal year 2014 budget proposal (PDF) seeks to support Washington’s interest in the Asia-Pacific region by “creating a more operationally resilient Marine Corps presence in the Pacific (and) undertaking key presence initiatives in Australia, and investing in Guam as a joint strategic hub”. China is uneasy with the “rebalancing” of forces as Washington winds down its Afghanistan operations and renews its attention on the Asia-Pacific.

And in the face of threats from North Korea, elements of the Terminal High Altitude Area Defense (THAAD) missile system have begun arriving on Guam. In the Northern Marina islands, residents and indigenous people have expressed opposition to the U.S. military’s proposal to use Pagan and Tinian as training sites.

French Polynesia’s first round of territorial elections has been held, with three parties garnering more than the required 12.5% of the vote to go forward into the run-off election which will be held on May 5th. Gaston Flosse’s Tahoeraa Huiraatira Party won 40.2% of the vote, while incumbent, President Oscar Temaru’s UPLD captured 24%. Candidate Teva Rohfritsch received slightly less than 20%. The eventual results will determine the formation of French Polynesia’s 57-seat assembly for a term of five years. In the lead up to the elections campaigning has been fierce. Four of the nine lists lodged complaints against the legality of Gaston Flosse’s party and Temaru has repeatedly attacked Flosse in relation to Flosse’s jail sentences for corruption. Flosse was allowed to contest because he is in the process of appealing the convictions in higher courts. During his campaign President Temaru said he had secured an MOU with China for a loan worth five billion US dollars. The results are likely to have some influence on French Polynesia’s independence bid.

‘Migration with dignity’ high on agenda in Kiribati

This month, The Global Mail ran an in-depth feature looking at Kiribati’s ‘migration with dignity’ plan, including photographs and video. The feature focuses on the looming fresh water crisis on the country’s atolls, as well as population pressures. It also recounts some of the misguided aid projects that have hindered rather than helped I-Kiribati adapt to climate change. A major call from the feature was for Australia to formally recognise climate change refugees, a move that is now being backed by the Refugee Council of Australia. The issue was also covered in The Guardian.

A national high level meeting on climate change in Kiribati was also held last week, highlighting fears about the country’s future. “I think we have to acknowledge the reality, and…the projection is that the sea level rise will render our islands submerged and virtually uninhabitable,” President Anote Tong told ABC Radio.

Two former Autonomous Bougainville Government (ABG) ministers took out a full-page advertisement in The National, heavily criticising (pdf) the ABG’s draft mining policy for among other things, being influenced by foreign, ‘colonial masters’. Bougainville’s Panguna mine has come back into focus not only because of its possible re-opening but also due to a recent US legal decision, which appears to make it even harder for non-US communities to seek redress from corporate entities via the US courts. The legal decision doesn’t bode well for 10,000 former and current residents of Bougainville with an ongoing case against Rio Tinto. Meanwhile, ABG President John Momis has stated that his government will legislate to restrict Chinese and other foreigners from owning trade stores and eateries for fears that they will take over the retail sector. Vanuatu is looking at a similar plan. Prime minister Moana Carcasses expects to submit the first draft of the plan to the Law Commission by the end of May.

No truly ‘green’ economy without sustainable ‘blue’ one

FAO Director General Graziano da Silva told ministers at the South West Pacific Ministers for Agriculture Meeting in Samoa that “there can be no truly ‘green economy’ without a ‘blue economy’ that makes the sustainable development of oceans and fishery resources a priority.” Participants from 14 Pacific island countries were meeting to review and adopt an overall agricultural plan for the region for the 2013-2017 period. Another fisheries related meeting took place in the Solomon Islands where New Zealand pledged close to NZ$4 million to the Forum Fisheries Agency. In American Samoa, tuna production capabilities have been given a boost with the completion of a 5000 metric tonne cold storage building. The facility, worth US$5 million, marks the first step for company Tri Marine’s investment plans, with another $50 million slated for spending on a new processing and packaging facility and a cannery in the future.

Economic growth to slow in the Pacific

Economic growth in Pacific island countries is predicted to slow in 2013, according to the UN Economic and Social Survey of the Pacific and the World Bank’s East Asia Pacific Update. The UN forecasts growth in the region to slow from 6.4 percent in 2012 to 3.4 percent in 2013. The decline is due in large part to the completion of the LNG project in PNG, where economic growth is expected to fall from 9.2 to 4 percent. Weak global demand for commodities continues to adversely affect PNG and other Pacific economies such as Solomon Islands and Vanuatu. Economies reliant on tourism and remittances are also growing slowly as a result of global economic conditions. The situation in Nauru is more positive, with significantly higher economic growth forecast as a result of the re-establishment of the offshore processing centre by Australia. 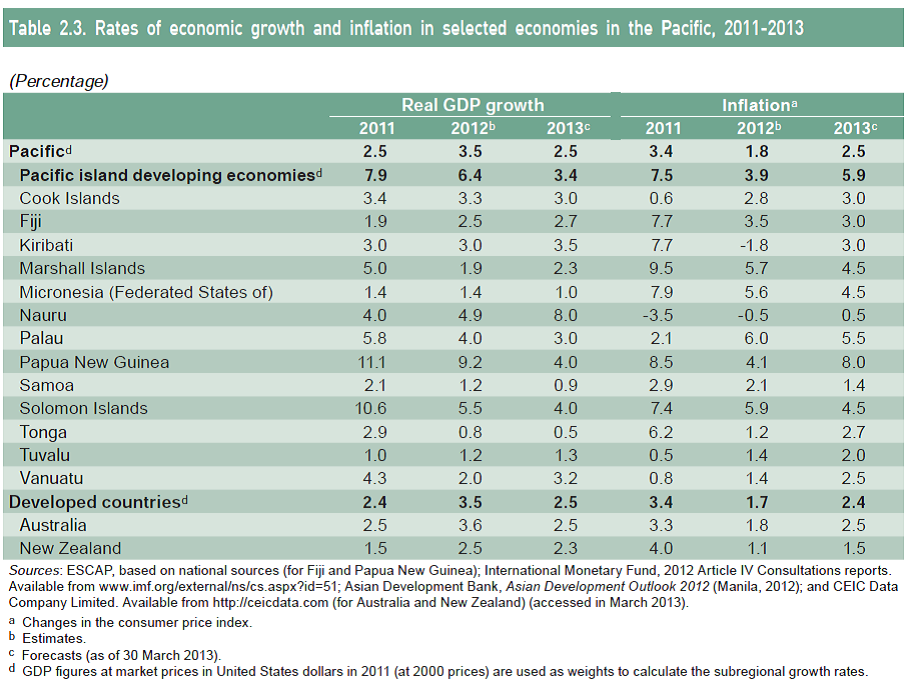 Youth unemployment a considerable challenge in the Pacific: UN

The UN Economic and Social Survey of the Pacific has identified youth unemployment as a key challenge for the region. Unemployment among young people is far higher than for other age groups in Pacific island countries. In Fiji, youth comprise one-third of the workforce but two-thirds of the unemployed, while in Kiribati, youth comprise one-quarter of the workforce but 58 percent of the unemployed. The UN Economic and Social Survey of the Pacific argues that the source of the problem is twofold. Low economic growth rates lead to lack of job opportunities. At the same time, there is a mismatch between education systems focused on the formal sector and job opportunities based in the informal sector (such as carpentry, mechanical repairs, and small-scale vending). The report argues for education reforms, expansion of donor-funded technical training programs (such as the Australia-Pacific Technical College), and increased opportunities for migration of youth to Australia and New Zealand.

In what could be seen as further challenge to regional institutions like the University of the South Pacific, Solomon Islands has opened a new university.

Pacific politicians have met in Wellington to discuss the role of parliament and the media in environmental issues and the representation of women.

A new bill in the Solomon Islands will keep former PMs on the state payroll.

The new leadership in Vanuatu is pushing its policy agenda with an ambitious 100-days plan.

A scathing report on human trafficking in PNG has shown that adults and children are being pushed into sexual exploitation and forced labour.

Political parties in PNG that win less than five seats in a general election will be required to amalgamate with larger parties under revised laws presented to PNG cabinet.

Nauru and Kuwait have established diplomatic relations to promote friendship and mutual cooperation.

The Republic of Marshall Islands has launched a new website to preserve and promote cultural and historical resources.