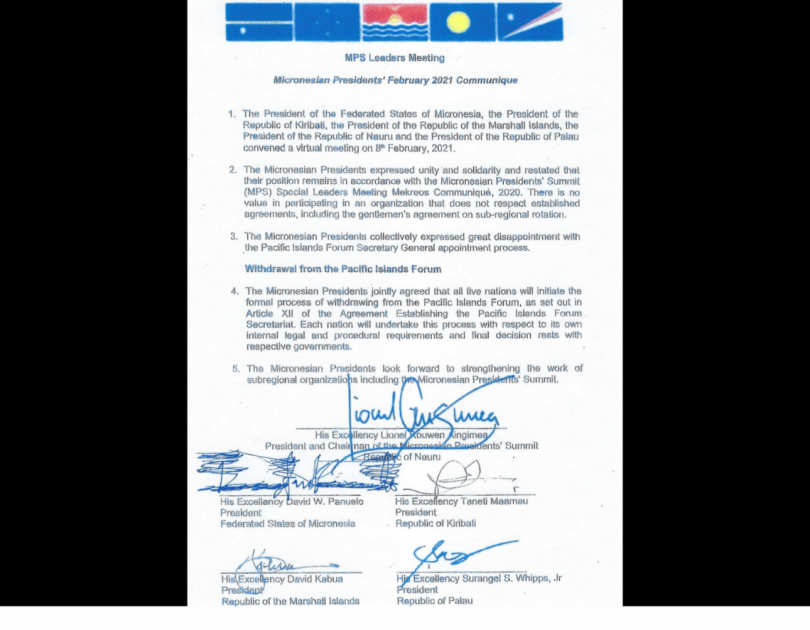 Communique from the Micronesian nations following the Forum meeting.

The fallout from last Wednesday’s election of the Secretary General of the Pacific Islands Forum Secretariat does not come as a surprise to me. We had been warned that if the Forum leaders did not seek to stick to what has always been an unwritten convention and agreement there would be repercussions.

In late 2019 when the leaders of the five Micronesian states announced the candidature of Ambassador Gerald Zackios, they also made it clear that it was Micronesia’s turn to hold the post of Secretary General in keeping with the traditional rotation amongst the three regional groupings that make up the Pacific Islands region.

The immediate predecessor of Dame Meg Taylor, a Melanesian, was Tuiloma Neroni Slade, a Polynesian, and so it was only natural that Micronesia would feel that it was their turn to lead this time round. It therefore comes as no surprise that Palau has withdrawn its Forum membership, and other Micronesian countries have said that they will follow. They did warn the region over several press statements that they expected the unwritten convention to be honoured.

The rest of the region perhaps may have underestimated Micronesia’s resolve and taken their position lightly, but they now have to deal with a challenging and totally unprecedented situation. In 2013, one of the Parties to the Nauru Agreement (PNA) members walked out of a meeting in protest, but never has a country or grouping of countries in the region walked out of an organisation, or threatened to re-evaluate their engagement in an organisation, let alone one that is prestigious and prominent. This is not the first time regional cooperative action has been tested, but it is probably the most serious existential threat yet to the Forum, and a major test for our leaders.

If our leaders had been able to meet in person, the outcome may have been different. They would have been able to perhaps come up with a mutually acceptable compromise. In our regional interactions, personal contacts are vital to building relationships.

In 2003, I was at the Meeting of the Leaders of the Small Island States (SIS) in Auckland, when John Howard, then Prime Minister of Australia, walked into the room and requested SIS leaders support Australia’s candidate, the late Greg Urwin, even though they had been supporting Vincent Clodumar of Nauru. When Greg Urwin passed away, Samoa asked that Tuiloma Neroni Slade be appointed to finish off his turn, as he had been married to a Samoan. There was an expectation that after having Noel Levi, a Melanesian, immediately preceding Greg Urwin, and then Tuiloma Neroni Slade, that it was Micronesia’s turn.

In 2013, I told the late Tony de Brum, who was Minister of Foreign Affairs for Marshall Islands at the time, and Pete Christian, who was the Speaker of the Federated States of Micronesia (FSM) Congress, that Micronesia should nominate a candidate for the post of Forum Secretary General. The idea was picked up and Tony de Brum was endorsed by  Marshall Islands. However, they did not lobby extensively for him and in the end Papua New Guinea nominated their outstanding international civil servant, Dame Meg Taylor.

I know that the argument is now being made that the position should be awarded on merit. Arguably the most technically competent candidate in this round was Dr Jimmie Rogers of Solomon Islands. But there was no way the region would have appointed a Melanesian to replace another Melanesian. Appointments to heads of regional organisations are in any case never merit-based. They are always heavily influenced by regional politics.

It has been said that had Micronesia nominated former Marshall Islands President Dr Hilda Heine, she would have walked straight into the position. That may be true, but we should always respect whoever is put up and the foreign service and legal background of the Micronesian candidate, Gerald Zackios, would have made him a capable Secretary General.

Putting a Micronesian in the SG position would also have been appropriate given the critical importance of three regional issues: climate change, oceans and geo-political tussles. The Micronesian countries are the most vulnerable and threatened by climate change and the impacts of global warming. They also have the largest and most productive exclusive economic zones (EEZs) in the Pacific, through which hundreds of fishing vessels from Japan, Taiwan, China, Philippines, United States, and Korea traverse. The most important trading routes between Asia and the United States also pass through the EEZs of the Micronesian region. Two important regional institutions for the governance of fisheries – the PNA Office in Majuro and the Western and Central Pacific Fisheries Commission Secretariat in FSM – are based in Micronesia. Finally, the place of Micronesia in the geo-political tussle between China and the United States cannot be underestimated, especially given the two US military bases there.

The potential split perhaps will not have as great an impact as one would imagine on the island countries themselves. There are already subregional groupings. The region is multidimensional, and constantly changing, and to assume that they it always be united perhaps underestimates the emergence of strong national and subregional impulses. The biggest impact arguably will be on Australia and New Zealand, who will have to navigate through a myriad of organisations to deal with some of political issues that fall within the purview of the Forum.

In sum, the depth of feeling that it was indeed Micronesia’s turn was perhaps underestimated, and a combination of COVID-19 and the prohibition on travel made developing personal rapport amongst the leaders difficult. As a result of Wednesday’s election, the form of our regional engagement at the highest level will never be the same.