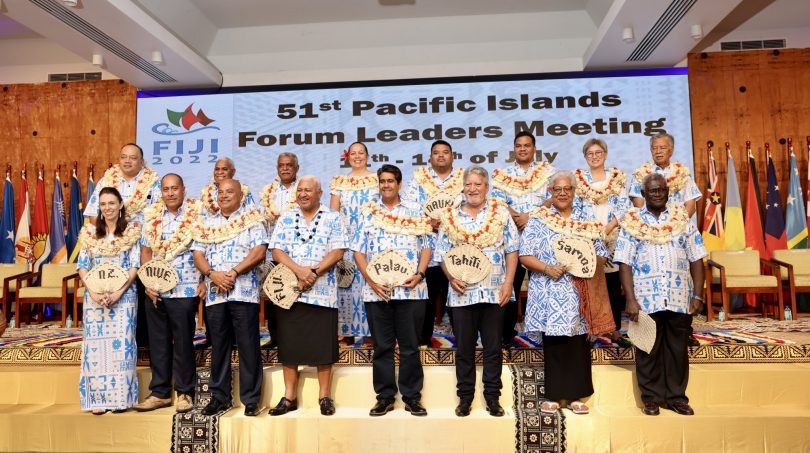 The Pacific Islands Forum (PIF) leaders meeting in Fiji this week was rocked by the non-arrival of several leaders and by the surprise announcement by Kiribati that it would not be withdrawing its earlier resignation from the Forum.

The ongoing turbulence can be traced back to February last year, when the five Micronesian PIF members announced they would be leaving the Forum after their candidate (diplomat Gerald Zackios) for the vacant position of Secretary-General (SG) was defeated by the Polynesian candidate (former Cook Islands Prime Minister, Henry Puna), despite what they said was a “gentlemen’s agreement” that it was Micronesia’s turn.

The vote was close: eight versus nine. One question that has never been answered is who voted for whom. As we have written about before, all five Micronesian countries – the Federated States of Micronesia, Republic of Marshall Islands, Palau, Nauru and Kiribati – surely supported Zackios. Similarly, all six Polynesian countries – Samoa, Tonga, Niue, Cook Islands, Tuvalu and French Polynesia – likely went for Puna. That leaves six – Fiji, Vanuatu, Solomon Islands, Papua New Guinea, Australia and New Zealand (New Caledonia was absent). Since voting is confidential, it has never been clear which three voted for Puna and which three for Zackios. Many have suspected that Australia and New Zealand voted for Puna, and the President of Palau is on the record saying this.

At a minimum, we can be sure that Australia did little or nothing to ensure that Zackios got up. Indeed, it is clear Australia and other countries completely missed the risk that Micronesia would pull out if their candidate was unsuccessful. At the press conference immediately after the election of the SG, the Forum Chair, the Prime Minister of Tuvalu and the outgoing SG, Meg Taylor, confidently assured journalists that there was no “gentlemen’s agreement”. Clearly the Micronesian governments thought there was – and quit the Forum when it was not honoured.

Ever since, Australia has been trying to make amends by playing the role of honest broker in facilitating a deal. And a deal was struck. The initial compromise involved Puna standing down immediately. That was obviously too much for the Cook Islands, and the revised deal (the ‘Suva Agreement‘) gave various other benefits to Micronesia, such as a sub-regional office, but also allowed Puna to finish his first term, but not seek a second. That was still a compromise: SGs typically serve two terms (unless ill-health intervenes). And it was a compromise Cook Islands clearly was still unhappy with (perhaps explaining the absence of their Prime Minister), and Kiribati as well (hence their refusal to withdraw their resignation).

The Nauru President is also missing. Officially this is because of COVID-19, but at his speech last month at the Pacific Update, President Lionel Rouwen Aingimea complained that endorsement of that agreement by PIF members was “hesitant in coming”. Finally, the Republic of Marshall Islands President is missing because that country had already passed legislation withdrawing from the Forum. The only Micronesian leaders attending this year’s annual meeting are from the Federated States of Micronesia and Palau, the two Micronesian nations that attended last month’s negotiations of the Suva Agreement.

We’ve written before about the unimportance of the Forum for individual members. There are actually few benefits to being a member, and so few costs to leaving. It is also the case that there may be other reasons behind Kiribati leaving. The small island state is one of the worst governed in the world, as evidenced by the fact that it has the fourth highest rates of both TB and diabetes in the world. Its refusal to negotiate with shipping companies for the repatriation of its seafarers during the pandemic has led tragically to the termination of an employment agreement which for decades found much-needed work for i-Kiribati as seafarers.

All that said, the Forum is important for the region in the sense that if it didn’t exist, it would need to be invented. And it is important to Australia because it brings it into an organisation with the Pacific from which China is excluded.

The bottom line is that if Zackios had been elected SG in 2021, there would not have been the disunity that has plagued the Forum ever since. One of us noted in 2020 that Zackios was considered “the firm favourite”, and another commentator remarked after the fact that his election “should have been a mere formality”.

How was it that Australia voted for the wrong candidate back in 2021 or, at a minimum, didn’t campaign for the right one? Was it an error made by DFAT’s well-resourced Office of the Pacific or by then ministers Marise Payne and Zed Seselja? It is time for some answers.