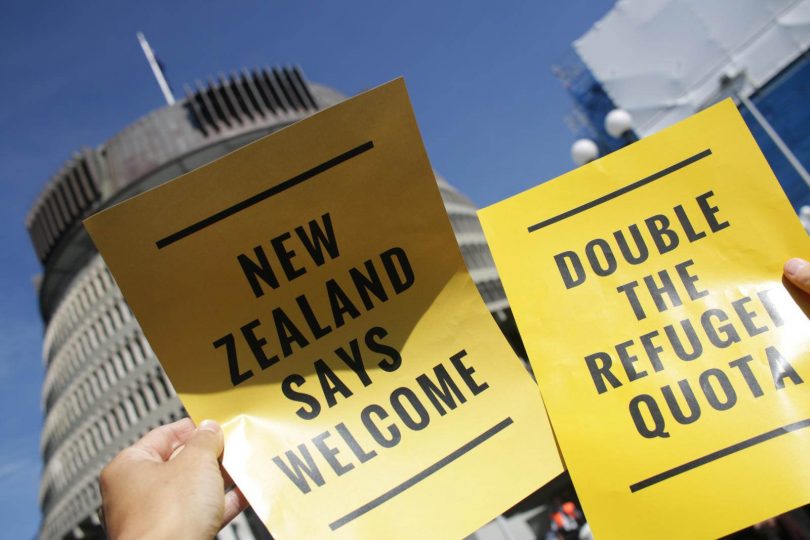 In a few days New Zealanders go to the polls. Here, I blogged about action needed to improve New Zealand’s international development efforts. I then wrote to each political party and asked them what their election commitments were for international development. Below I assess party policies, including a table of their pledges on refugees and climate change. I conclude reflecting upon the state of foreign policy thinking amongst New Zealand political parties.

To summarise the quality of the policies, the Green and Labour Party policies are the best. The Opportunities Party (TOP) makes a decent effort, while New Zealand First and the ACT Party policies are rudimentary. The Māori Party have no foreign affairs policy on their website, but they at least acknowledged my query. The National Party comes last because they have no policy online and did not respond to me. To be fair, New Zealand First did not acknowledge my inquiry either, but they at least have information online. I did not correspond with United Future or Mana. The former has no policy, and the latter’s foreign relations policy centres on indigenous peoples.

While the Green Party Global Affairs policy lays the foundation for their international development promises, Barry Coates, the Green Party’s global affairs spokesperson, provided detail in correspondence with me. The Green Party would ensure aid analysis prioritises the poor, legislate for aid’s poverty reduction purpose, increase aid to 0.7% of GNI within four years, and shape aid to achieve the Sustainable Development Goals (SDGs). Aid activities would be designed based on country context,and capacity development needs. The Greens pledge to reform and strengthen global governance entities. In terms of accountability, the Greens would restore a mechanism within the Ministry of Foreign Affairs and Trade for getting direct development advice to the Minister. Climate finance would be new and additional to existing aid.

The Labour Party gets points for having a specific overseas development policy. Similar to efforts in the United Kingdom (for example), Labour offers to explore setting-up a political volunteers scheme to foster politicians’ engagement with international development. They would also fund education in New Zealand about development – a welcome commitment. Labour would focus the Aid Programme on poverty elimination and ensure the Pacific Division concentrates on achieving development outcomes. Like the Greens, under Labour aid would focus on the SDGs. The Pacific remains the geographical priority, and women’s health and education also get a mention, as does working with the Pacific diaspora in New Zealand. Like the current government, Labour pledges to review the Partnerships for International Development and Disaster Response Funds. Aid would be increased each year to reach 0.7% of GNI over time, and a cabinet minister (probably an associate) would be responsible for overseas aid. Labour’s climate change aid promises want for specifics, promising only that Pacific aid would address climate change.

In response to my query, TOP outlined their support for “a return to an arms length aid organisation” and would focus aid on what countries need, not on giving New Zealand companies preferential treatment. TOP believe in a balanced emphasis across the social, economic and environmental aspects of sustainable development, and in principle supports increases in aid (although they have not costed this yet).

A pledge from New Zealand First to focus New Zealand’s aid on poverty alleviation is welcome. The party would also continue to prioritise effort on the South Pacific. New Zealand First’s foreign policy is an updated version of its 2011 policy, and its international development commitments are an exact replica. However, the 2017 version has lost the commitment to the United Nations and multilateralism, which is a concern.

Trade and security are ACT’s main foreign affairs priorities, with a focus on relationships that benefit New Zealand’s safety and prosperity. ACT believe aid should remain focused on the South Pacific.

Trade continues to dominate the National Party’s foreign affairs concentration, and they have a robust trade policy. Yet there is no sign on their website of any thinking about how they would improve their international development efforts, including action on climate change. Overall, it appears as if we can expect more of the same if the National Party win the opportunity to form government on 23 September.

As the table below shows, a consensus is emerging that New Zealand needs to increase its refugee quota, and more political parties are finally taking climate change seriously, following the Greens’ long-term lead.

Jo Spratt is an ANU PhD candidate studying NZ aid policy. Before this, Jo was an NGO advocate, manager and capacity-developer working in the Pacific. Jo is interested in global health, NGOs, and the practice of development and aid’s role in this. She is volunteering for Labour in the 2017 election. Jo is also a Registered Nurse.