PNG is coming to the end of a two-week national election which began on June 23rd. The formal campaigning period ended on June 22nd. Here I report on my week-long observation of the election campaign in its dying days in the Highlands of this colourful country.

I spent a week in Wabag, watching close range the height of campaigning for several seats in Enga province. The atmosphere was festive, the place peaceful, and the feisty spirit of the campaign at its peak.

Police and military officers were present in numbers both in Mount Hagan and Wabag. The ballot boxes were stored in steel containers inside a fenced compound next to the police station with the roads to the site blocked. Fully armed soldiers stood guard at the road block.

Campaign with cash, coke, and pork.

The campaign was all about mobilising cash, coca cola (coke), and meat (pork): this was pork barreling, literally. The lone redistribution that I witnessed involved the amassing of K17,000 (AU$8500) cash, 70 cartons of coke, 32 pigs, and 5 goats. These items alone that were redistributed that day amounted to a total of K71,000. Even I got K50 from the head of my clan from this redistribution.

Adding on costs of transport – all by 4-wheel drive vehicles, labour for the feast and accommodation for the participants, and logistics makes such rallies amount to K100,000 undertakings easily. Each candidate has several such rallies with each having just as many ‘Campaign Houses’.

The campaign is a mix of capitalism spiced with a heavy dose of the culture of exchange and reciprocity. Cash was handed to voters: Candidates paid anything between K500 to a K1,000 just to use a public platform to deliver a speech when away from their own campaign houses.

One candidate reported that K1 million was not enough; and, that winning was all about how much cash and cargo one could mobilise. Candidates were contesting to deliver cargo to their clans. This particular contender was adamant that the capacity to deliver services counted for nothing!

A rally to remember

Peter Ipitas, the governor of Enga, held a rally of his own in the provincial capital on the 20th of last month. It involved the handing over of a large building in town to a foundation named after the Governor that pays school fees of children in the province.

It was a rally to remember. While impossible to even hazard a count of the number present, the crowd filled the entire town.  Police had a heavy presence. At least one officer was furiously waving a meter long whip as a means to freeing up space from the crowd of spectators for those in the procession.

The procession itself was a colourful and crowded affair. Children from the surrounding schools, students from the teachers college in Wabag, and many more joined a long and noisy march to a large platform constructed in town for the handing over ceremony. The governor was the guest of honour and many banners broadcasted and the banner holders chanted the good the governor had done.

Democracy at its pinnacle in PNG 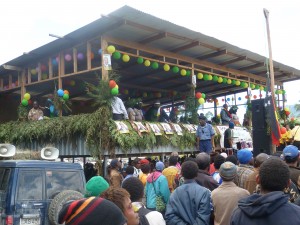 PNG may lack many things but not the festive and feisty fight for the 111 seats in the national parliament. Candidates spend millions of their own money and from their close kin to contest for seats which have a tenure of just 5 years and, if lucky, collect paychecks worth half as much. Why? How will the difference be patched?

At what price I wonder. Basic services remain inaccessible to many. The Highlands Highway, the aorta of the PNG economy, is in a deplorable state.

Disappointingly, those elected will have little incentive to fix the broken-down infrastructure or work towards improving delivery of basic services in this land of rich natural resources.

If we are to see better leadership then the incentives for our politicians need to be remedied.

Pork and coke, in the meantime, have the day – cheers!

Satish Chand is Professor of Finance at the University of New South Wales and a Research Associate with the Development Policy Centre.