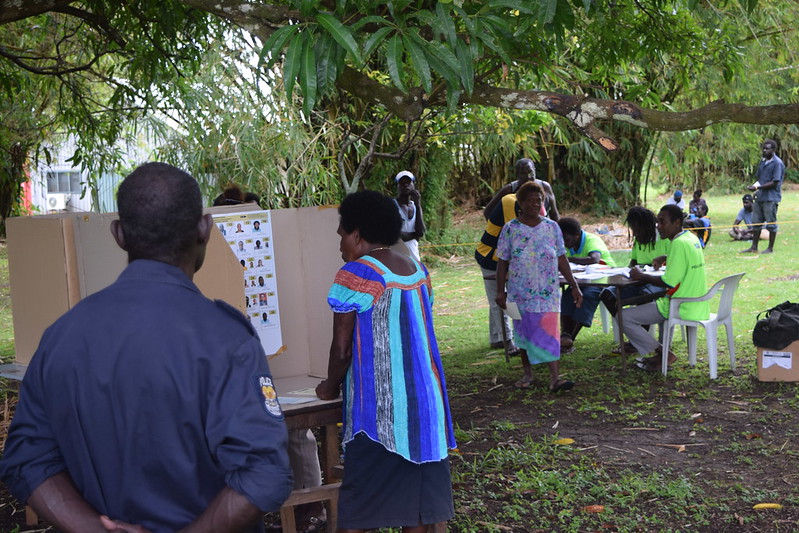 This is the second blog in a two-part series. Part one detailed the circumstances surrounding the unsuccessful re-election of three women members of parliament (MPs) in Papua New Guinea (PNG) who entered parliament in 2012 – Loujaya Kouza, Julie Soso and Delilah Gore. In this second part I analyse the case studies and reach three findings: the women’s attempts to consolidate power in their province during their first term were unsuccessful; the importance of provincial assemblies in national politics should not be underestimated; and the rules of big-man politics seem likely to apply to women MPs.

First, while Kouza, Soso and Gore may or may not have been treated differently because they are women, what is certain is that they had to deal with the nature of PNG politics, as experienced by all MPs. The controversies surrounding the three women relate to the politics of delivering development to electorates, which is crucial in influencing votes for the re-election of any MP.

Having access to development funds or control over administrative oversight is critical in directing electoral development. Kouza’s role as chairperson of the newly established Lae City Authority (LCA) would have given her control over the administrative and financial aspects of Lae, the second largest city in PNG. Soso, the subject of the second case study, was involved in the tussle over the appointment of the provincial administrator in Eastern Highlands Province. It is notable that the impasse over the appointment of the administrative head of the province dragged on after the defeat of Soso in the 2017 election.

The bureaucratic heads of provincial government play a key role in influencing development in their province and as such, it is important for any politician, especially governors, to have a provincial bureaucracy totally committed to the visions of the incumbent governor. The third case of Gore also demonstrates this phenomenon. Gore tried to intervene in the appointment of the bureaucratic head in the province using her position as a state minister through the National Executive Council (NEC). She was also alleged to have been involved in the attempted removal of Governor Gary Juffa despite denying her involvement. As in the case of Soso, the visions and goals of Gore and other MPs in Oro Province were different from Governor Juffa’s, leading to political infighting in an effort to remove Juffa.

The case studies indicate the three women made efforts to consolidate their political power and form alliances with other MPs within the province with the aim of dictating electoral politics, but they were met with resistance within their respective electorates and provinces.

A similar trend can be seen in the second case study of Soso, who breached a court order in an attempt to remove provincial administrator Solomon Tato. The case of Soso has roots in the provincial assembly as well, although not evident from the media coverage. Then police minister Robert Atiayafa stated that there was lack of understanding between Julie Soso’s administration and the political leaders of the province – an indication of division in the provincial assembly. Soso also admitted that the political impasse cost her image as a leader.

Gore’s case is somewhat similar, although the narrow margin of her defeat in 2017 suggests that she had maintained support in her electorate. Gore’s involvement in the Oro provincial assembly and the conflict with Governor Juffa further illustrates how provincial assemblies can influence the politics of electoral development and voter perception. Provincial assemblies are composed not only of national MPs but village councillors, presidents, youth and women’s representatives who reside and interact with the majority of the eligible voters. Their dissemination of information in the electoral market is paramount to understanding voter behaviour in this regard. In addition, Gore stood as a candidate of the People’s National Congress (PNC), a party that Governor Juffa strongly opposed.

Lastly, whether the three women’s experiences exhibited aspects of big-man politics is unclear and needs more research. In this regard the case studies give mere glimpses of how the three women performed during their tenure as mandated representatives. Gore was referred to the leadership tribunal for her inappropriate behaviour by shouting to a flight attendant in an aggressive tone, ‘Do you know who I am?’ The outburst could indicate a persona associated with big-man status in PNG politics, which can involve aggression.

The cases of the three women may highlight the big-man political culture through their debates and arguments presented in the media. The behaviour of Soso in ignoring the court order to restore Solomon Tato as provincial administrator is an example of behaviour commonly associated with the big-man narrative. Kouza’s reluctance to negotiate with the LCA and her skirmish with Governor Naru is another example. It could be argued that the three women were treated as politicians and their behaviour matches that of other (male) politicians in PNG. The three women’s staunch defence of their actions was essential to preserve their big-man status. According to Joseph Ketan, the achievement and maintenance of big-man status is paramount in ensuring continued support and social relations in traditional settings. It becomes even more necessary for a politician to maintain political support at the state level.

The key findings above highlight how local politics pertaining to provincial and district matters affected the prospects of the three women MPs seeking re-election in 2017. The women were unable to strengthen their positions despite displaying some behaviours associated with big-man politicking in Papua New Guinea.

This is an edited version of In Brief 2021/02, originally published by the Department of Pacific Affairs at ANU as part of their In Brief series.

Russel Yangin is a lecturer in political science at the University of Papua New Guinea.