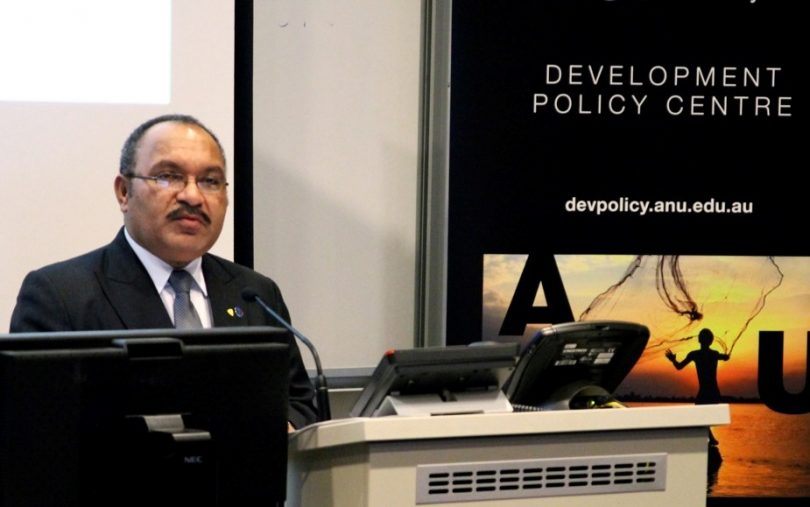 Peter O'Neill (here speaking at ANU in 2011) has been returned as PNG's prime minister twice, in 2012 and 2017 (Development Policy Centre/Flickr)

Central to the selection of the prime minister in Papua New Guinea following a general election is Section 63 of PNG’s Organic Law on Integrity of Political Parties and Candidates (OLIPPAC), which was passed in 2001 (and then amended in 2003).

Section 63 requires that the Governor-General invites the party with the highest number of MPs following a general election to form the government. The main aim of the section is to ensure that the appointment of a prime minister after a general election is done in an “orderly way with direct relationship to the way voters expressed their wishes”.

Analysis shows that the passage of OLIPPAC has influenced government formation. First, it has increased the probability that, as is now a legislative requirement, the PM comes from the largest party. This has happened in all elections since OLIPPAC was legislated (2002, 2007, 2012 and 2017), but only happened in two out of the five pre-OLIPPAC elections (1977 and 1982).

For example, as Table 1 shows, in 1997 the People’s National Congress Party (PNC) had the sixth highest number of MPs but still was able to put forward the successful candidate for PM. 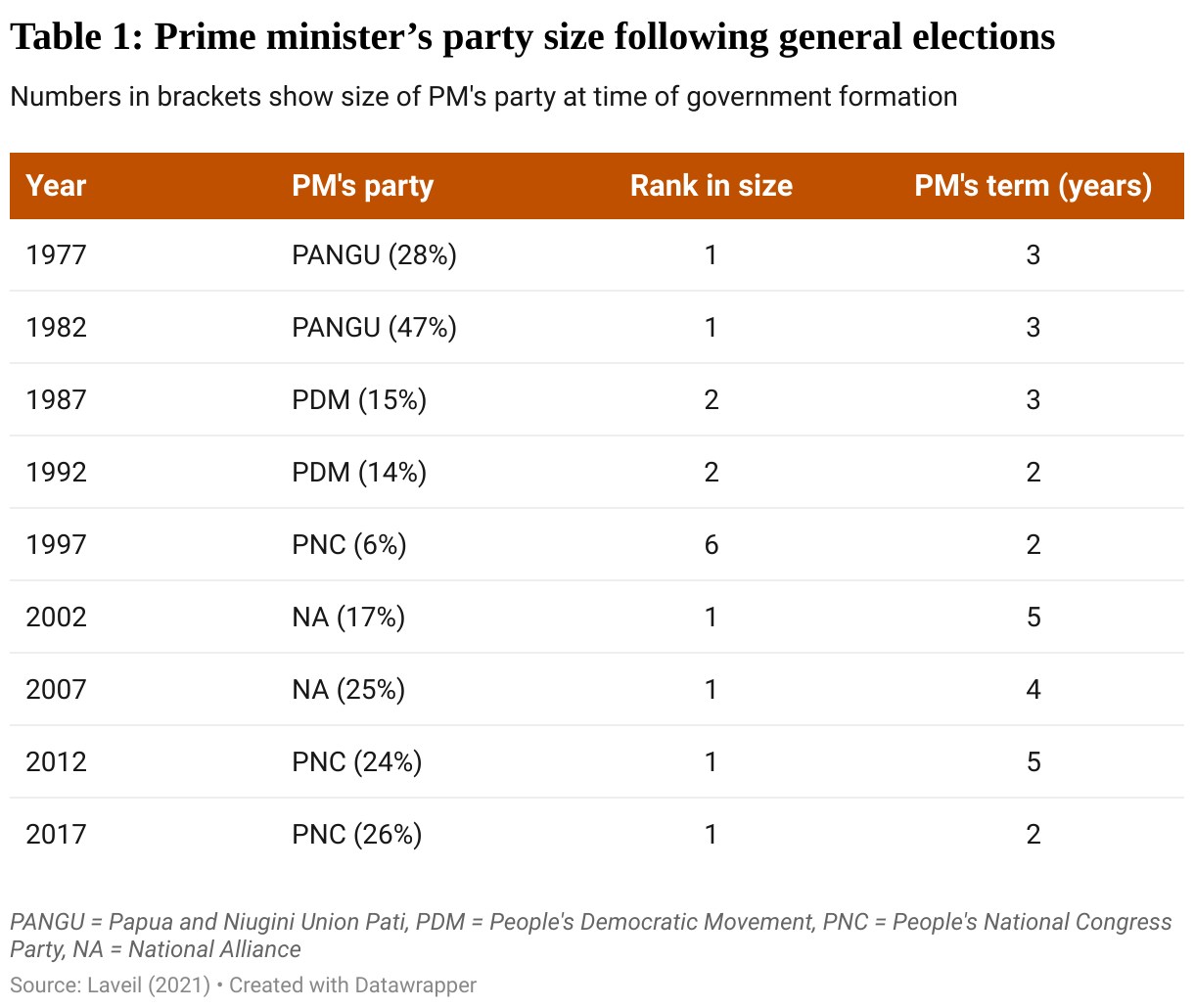 Second, Section 63 also seems to have increased the odds of an incumbent PM being returned. Since the first post-independence election in 1977, five incumbent prime ministers have been re-appointed as PM following one of the country’s nine national elections (see Table 2). The other four times a new prime minister was appointed post-elections. The five times the incumbent was returned are 1977 (Somare), 1987 (Wingti), 2007 (Somare), 2012 (O’Neill) and 2017 (O’Neill). Only two of the five incumbent returns are before the first enactment of OLIPPAC in 2001, and the other three are all post-OLIPPAC. 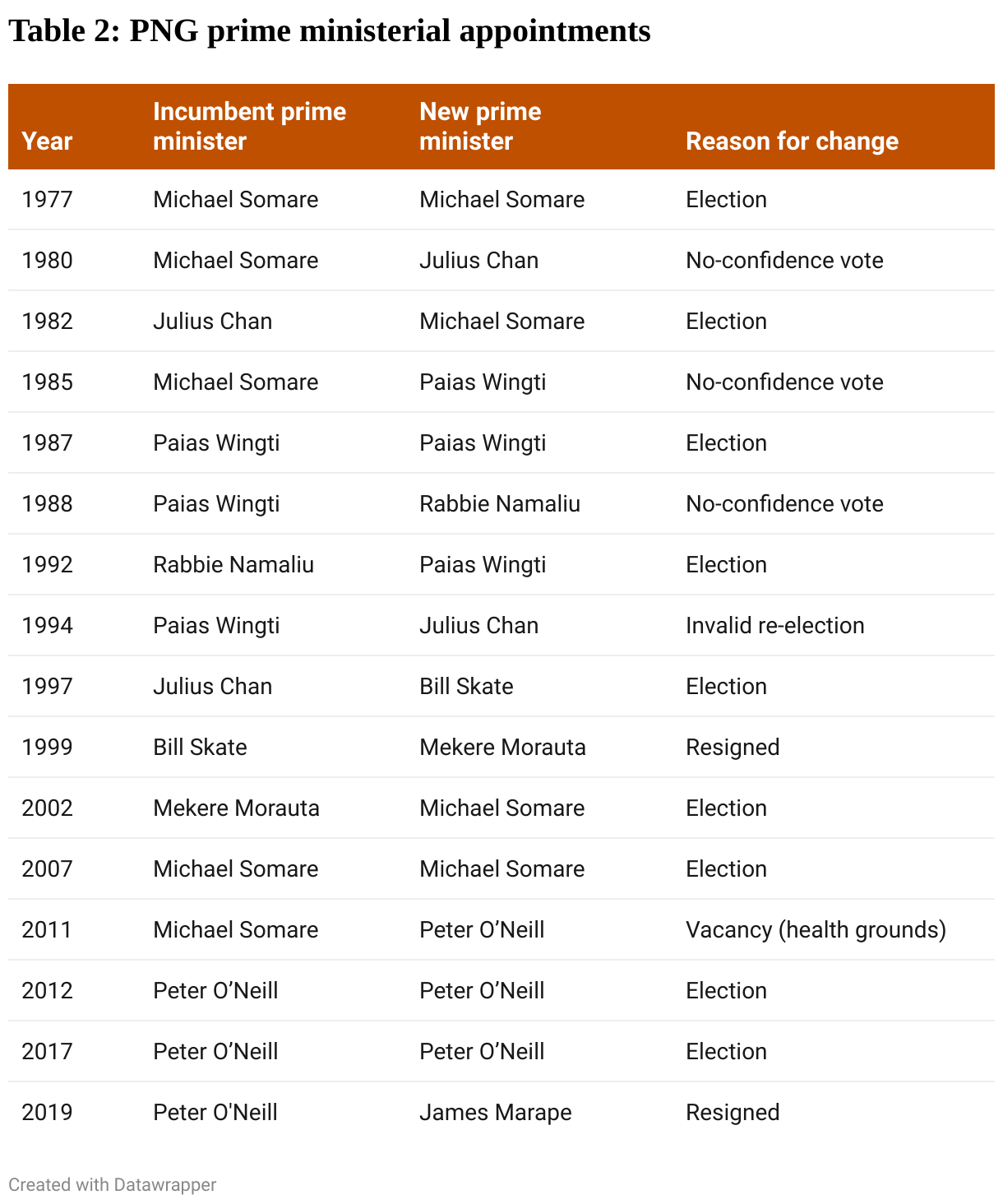 These two developments are closely related. Over the life of the parliament, MPs tend to join the party of the PM, meaning that that party goes into the election with by far the largest number of MPs. For instance, PNC won 27 seats in 2012, led by the incumbent PM Peter O’Neill, and formed the government. More MPs joined PNC, and by the time the 2017 elections came around, PNC had 55 MPs. Even though PNC lost 34 sitting MPs, with only 21 getting re-elected, it added seven new MPs in the 2017 elections. This took PNC’s numbers to 28 MPs, and, after the 2017 elections, it wound up forming the government.

About half the incumbent MPs don’t get re-elected every election, but in general voters do not vote along party lines. Even if they do, and even if there is a swing against the PM’s party, because it has such an advantage going in, it is likely to emerge as the largest party as well.

In 2010, the Supreme Court ruled the restrictions imposed by OLIPPAC on the movement of MPs between parties unconstitutional. This means that MPs can move parties in the period between when they are declared winners following the national election and the appointment of the PM. What happened in 1987, 1992 and 1997 – when parties with fewer MPs formed the government – could be repeated, Section 63 notwithstanding. All MPs would need to do is submit their letter of resignation to the party that endorsed them for the election, together with a letter of acceptance from the new party they intend to join, to the Registry of Political Parties & Candidates before the election of the PM, and their movement to the new party would become official.

However, we have not seen that happening. This is because there is little incentive for MPs in the largest party to leave if it is likely to become the party of government. Rather, other MPs will join, by joining either the largest party or the governing coalition.

The only incumbent PM not to benefit from the passage of OLIPPAC was, ironically, its architect, Sir Mekere Morauta. He did not go into the election with the largest party, and he certainly didn’t emerge from it with the largest either.

This should remind us that there is no guarantee that the incumbent PM will be returned post-election. But it does seem that Section 63 has had the unintended consequence of increasing the probability of this happening. Most view stability as a good thing, but the problem is that the more likely the incumbent is to be returned at the general election, the more pressure there will be to remove him (or perhaps one day her) by a vote of no confidence – since that becomes the only way to do it. It may be no coincidence that both PMs who have so far benefited from Section 63 (Somare in 2002 and 2007 and O’Neill in 2012 and 2017) lost power mid-term on the floor of parliament.

Section 63 was passed with good intentions, but has led to a situation in which increasing stability either side of elections may be reducing it between elections.