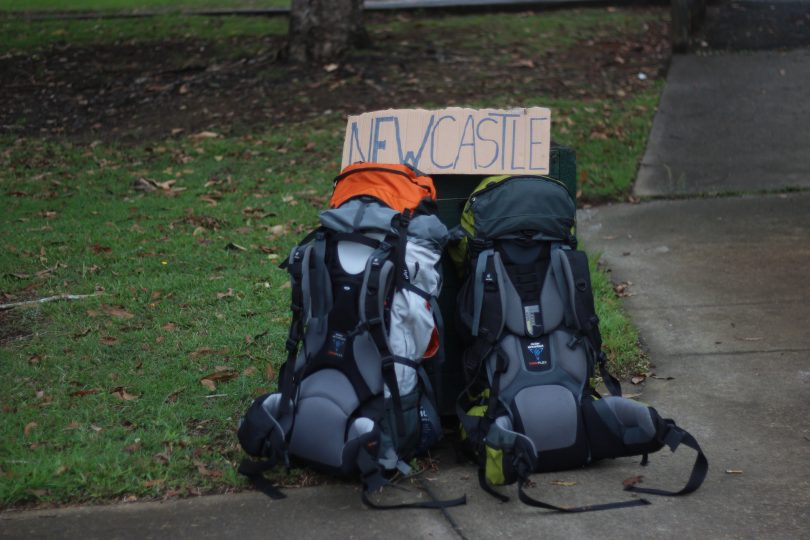 Having been foiled in their efforts to introduce a new agricultural visa, media reports indicate that the Nationals are now pushing for another year to be added on to the working holiday visa so that backpackers will get not one but two extra years in Australia if they work for three months on a farm.

This is a very bad idea for two reasons. First, it involves expanding a system that is broken. Encouraging more backpackers to work on Australian farms will increase worker exploitation. A 2016 Fair Work Ombudsman (FWO) inquiry into backpackers, mainly working in agriculture, found that more than one third said they were paid less them minimum wage. In particular, the FWO inquiry found that the second-year visa incentive has created an environment where “exploitative workforce cultures/behaviour are occurring in isolated and remote workplaces.”

Undermining the SWP will also lead to more exploitation in agriculture. A major report by University of Adelaide academics Sustainable solutions: the future of labour supply in the Australian vegetable industry found that the “The SWP results in less exploitation of workers… when compared with other low-skilled visa pathways”, especially backpackers.

Undermining the SWP would also be a strategic own-goal. Some 95% of backpackers are from rich (developed) countries. We have to ask ourselves as a nation: if our fruit and vegetables are going to be picked by foreigners, do we want those foreigners to be mainly from our poor Pacific neighbours, or from the rich countries of the world? For both strategic and humanitarian reasons, the answer should be the former.

It is important to remember the history here. Around 2005, there were then, as there are now, pressures to address horticultural labour shortages. There were also pressures from the Pacific for Australia to provide labour market opportunities. But Howard and Downer were unwilling to introduce a seasonal worker program. Instead, in 2005 they introduced the one-year extension to the backpacker visa, available in return for three months of farm work. The results were immediate. In the first year, 2,700 second-year visas were granted. Five years later the number had risen to 25,300. The horticultural labour shortage was solved. But the prospects for a Pacific seasonal worker scheme were cruelled.

It was left to Labor to introduce the SWP, which it did on a pilot basis in 2008-09. The numbers were miniscule. Julie Bishop’s main legacy as Foreign Minister may well be her scaling-up of the SWP. But even today the SWP is below the size of New Zealand’s equivalent, even though our horticultural sector is much bigger. With the ready availability of backpackers – who require no accommodation, no labour market testing, and no government approval of nor reporting by employers, few farmers were interested in the SWP – which requires all three. The recent crackdown on illegal labour has pushed farmers to the SWP. Trying to get more backpackers onto Australian farms would risk reversing this recent trend.

The graph below compares the number of seasonal workers and second-year backpacker visas over the last decade. There has been a reduction in backpackers between 2013-14 and 2015-16, but the number has since stabilised at 36,400, far higher than the 8,500 seasonal workers who came to Australia in 2017-18. 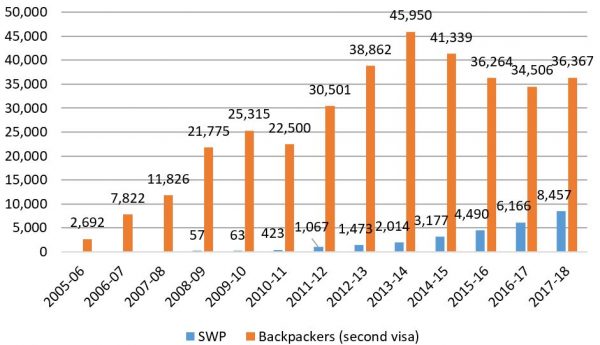 Of course, farmers will always need a mix between backpackers (cheaper, more flexible) and seasonal workers (more expensive, but more reliable and productive). At the moment though we have the mix wrong. We are moving in the right direction, but increasing the incentive for backpackers to take a job in agriculture will undo the progress made in recent years. Interestingly, New Zealand offers not one year, let alone two, but only three months of additional stay in return for three months of farm work. That is the direction we should be moving in.

There are some big policy questions here. We have to decide whether we want less exploitation on our farms or more. And we have to decide whether we mainly want Pacific islanders or rich-country foreigners picking our fruit and vegetables. The answers to these questions are obvious. They imply that the proposal to strengthen the incentive to backpackers to work on farms is misguided. Instead, we should be reforming and growing the SWP.