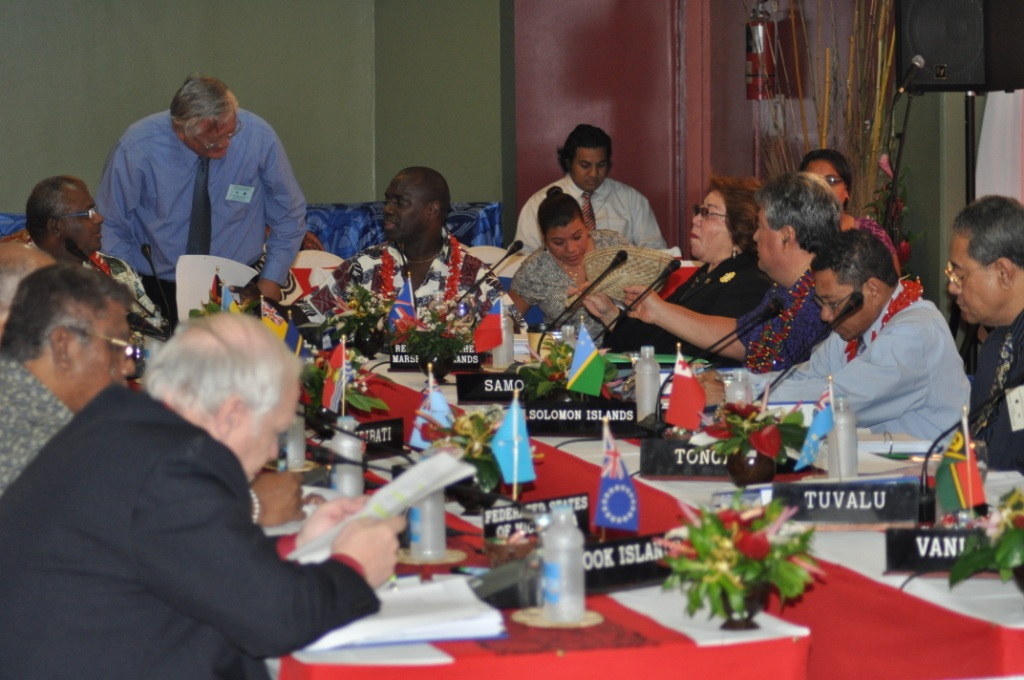 Meetings are an all too common occurrence in the Pacific.

The increased focus on global health seen around the world over the last decade has helped achieve some remarkable gains. At the same time, there has been growing realisation of the negative aspects of the proliferation of regional health mechanisms and funding streams in the Pacific which, for example, see senior Pacific health officials attending various narrow, disease-focused, meetings more than 50% of their time. In addition, a number of these regional program manager meetings have developed plans that were often constructed in isolation from in-country budgetary and sector planning realities. Earlier work by the author and colleagues brought these strains to light.

Over the last few months, there has been an encouraging response by prominent health actors in the region in developing a new model of health governance. With the current phase of funding for regional non-communicable disease programs from AusAID and NZAID coming to an end, and the completion of current HIV funding from AusAID, the Global Fund and others, the present moment offers a potential turning point in the way that bilateral and multilateral partners engage with Pacific governments in the health sector.

Specifically, AusAID has been going through a process of revising its Pacific regional health strategy with the circulation (for consultation) of a draft ‘Pacific Health Development Agenda’. The AusAID draft paper notes that “current regional governance arrangements in health encompass a variety of committees, networks and meetings. They have evolved on a largely ad hoc basis, are unwieldy, poorly coordinated, and can generate very high transaction costs (including staff absences) for countries.” The agenda acknowledges the need for a more streamlined and strategic model.

The subsequently circulated ‘Concept Note for a Delivery Strategy for AusAID’s Pacific Regional Health Program’ provides some initial thoughts on how AusAID can focus its regional support on a number of challenges that require regional approaches, while leaving national level issues for bilateral programming. These might include defining competencies and standards for pre-service health worker training, postgraduate health worker training, surveillance for cross-border disease threats, and centralised procurement of bio-medical equipment or pharmaceuticals. This is a positive development that provides clearer definitions and scope for regional versus bilateral engagement.

Along these lines, some positive steps have been taken to reduce the sheer volume of regional meetings. In 2011, the Global Fund and AusAID-funded ‘Pacific Regional Strategy Implementation Plan’ (PRSIP) scheduled their regional HIV meetings back to back in Nadi, Fiji, to reduce travel demands on participants attending both meetings.

The Secretariat of the Pacific Community (SPC) is also reviewing its engagement in the health sector as a regional agency. For a number of years, SPC became burdened by being the principal recipient, manager and distributor (and also a sub-recipient) of regional funds for HIV and non-communicable disease mechanisms. This role took SPC away from its primary mandate to support Pacific countries and territories – to the detriment of both sides. SPC is currently deciding whether it is likely to continue to try to play the principal recipient role for the Global Fund or pull out from that complex and burdensome (yet lucrative) task. More generally, over the last year, SPC has been debating its most appropriate role in the health sector and recently released its ‘Regional Architecture for Health’ [pdf] draft.

The purpose of the document is to argue for the need for, and to begin the design of, a regional architecture that “delivers only those functions where regional delivery adds value to and supports national plans.” The document acknowledges that “a lack of clear strategic direction in the sector has allowed fragmentation and duplication of some services, and critical regional public health functions have become short-term projects. Competition for resources has resulted from the absence of an agreed strategic framework and effective governance.” Furthermore, the document states that: the current governance arrangements “impose significant transaction costs because many HoH [Heads of Health departments] attempt to attend most of the meetings as resource allocation and decision-making responsibilities are vested in those governing bodies. Current arrangements are more oriented to meeting the accountability requirements of development partners than to maximising the ability of PICTs to make decisions that fit, and are supportive of, national needs.”

The document proposes a Heads of Health forum to direct and prioritise the engagement by donors to the region behind shared needs. The SPC, with the WHO, convened an initial Heads of Health meeting at the end of April to discuss the idea. Additionally, a ‘Framework for Health Development’ would provide the basis for aligning donor and government regional investments.

In some ways these proposals sound like another layer of regional governance rather than a solution. Without clear analysis and a comparison of the efficiencies or opportunity costs associated with addressing issues regionally or at the national level, efforts to align priorities at the regional level do run the risk of ignoring country-level differences in needs, capacities and directions in the name of regional unity and alignment. But, if the new mechanisms are able to bring multiple actors together and serve as a framework for action, especially if they generate more efficient ways of working between regional technical agencies (or even within the one agency), there might be light at the end of the tunnel. Fundamentally, any new meeting must replace – and, by implication, lead to the dismantlement of – at least one, if not multiple, existing meetings. The proposed Heads of Health meeting should replace the Australian-run Pacific Senior Health Officials Network meetings as well as the North Pacific’s Pacific Island Health Officers’ Association.

Much of the current emphasis seems to be on reforming the regional architecture but less focus has been given to how best to strengthen bilateral approaches in the region. SWAps are one model that have received some attention but the best approach to country-level support in Pacific countries remains an open question. More analysis on these approaches would be welcome.

The era of “vertical” disease financing accompanied by complex and divergent governance and accounting mechanisms for individual programs is coming to an end amidst the recognition that country-based, more efficient, and less burdensome models are needed to support health development in the region. Such moves must be able to respond to the differences as well as the similarities between countries (or groupings of countries), and avoid artificially generated solutions based on the assumption that “one size fits all”. More practical, country-based development support will provide hope for increased efficiency, greater time availability, and reduced costs for both Pacific governments and their development partners.