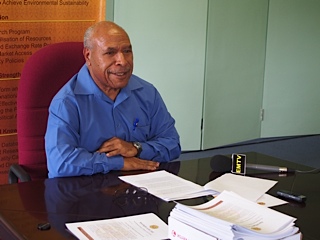 I want to thank the authors Professor Stephen Howes and Andrew Mako for their article. It highlights some key points observed in the PNG budgets over the last ten years. It was presented at the PNG Budget Forum, organised by the Development Policy Centre and the National Research Institute (NRI) on the 12th of September at the NRI. I have a feeling people in decision making roles have not taken note of these points and therefore wanted to re-emphasize them through the release of the Spotlight Article. I hope that these will be taken note of by Government in the formulation of the 2013 National Budget.

A number of points have been made but I want to pick out a few:

On the subject of budgets, I’d like to make two observations on recent discussions surrounding the Government’s plans for next year:

First, I want to re-emphasize that Parliament is the appropriate body to approve budgets. The Executive Government only proposes how to raise revenues and how these revenues will be spent. The only body to approve the proposed Maxim Bank Loan and where these funds will be spent is Parliament. I have heard the PM make this point and I look forward to the presentation of the proposals to Parliament so that they can be debated and then approved. In that way, the information is available to the public. However, in recent weeks, we have been informed that the NEC has approved a loan of more than K150 million from the Maxim Bank of China and awarded a contract to a Chinese company to undertake work on new information management systems, including the introduction of a bio-metric identification system. I hope that these arrangements have been undertaken in a way that complies with the Financial Management Act.

Second, while I support the Government’s proposal to borrow K6 billion to undertake major works on the Highlands Highway and on critical infrastructure, the Government must fix the governance and project management weakness that are evident in the way National Governments Tenders are awarded, how projects are managed and work that has been done is paid for. This has been highlighted in a full page advertisement taken out by the Minister for Works in today’s papers. We have spent a substantial amount of money on various projects around the country over the last ten years and have very little to show for it. These institutional deficiencies need to be fixed and systems working effectively to better manage the expenditure of the funds from the proposed loan so that we can see tangible benefits.

This is an edited version of a post originally published on the website of the National Research Institute. The remarks are in response to this NRI Spotlight Article (blogged here). Both are a  part of the Promoting Effective Public Expenditure in PNG Project.