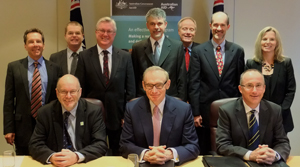 The objectives of the peak body for the Australian aid sector are quite radical – it exists not to be an industry association for aid workers, but to unite the sector in achieving change in the lives of the world’s poorest. In terms of achieving this mandate, sometimes it feels very modest. At the very least, there must be a clear historical record that the Australian aid sector spoke up and stood up in solidarity with its regional partner organisations for the human rights of the most vulnerable. Over the last three years there were some such moments where we united for change, and they are worth striving for.

Victor Hugo said, “There is one thing stronger than all the armies of the world, and that is an idea whose time has come”. In this vein, my work at the Australian Council for International Development (ACFID) often focused on influencing the political narrative, which means our CEOs as well as government:

The NGO voice on development and justice issues has to be the counterpoint, the voice of conscience. It must often be a lonely voice against the loud voices of military aggression, unsustainable economic growth and cultural insularity. It must speak with integrity, and offer argument based on evidence rather than partisan ideology.

There was a political moment when Kevin Rudd was Australian Foreign Minister where there were some real opportunities to change ideas – to reframe the way international development assistance was considered as part of foreign policy.

In 2011 we had the Independent Review of Australian Aid, the Fourth High-Level Forum on Aid Effectiveness, CHOGM, and the announcements of an Australian Ambassador for Women and Girls and of the Asian Century white paper, a strong foundation.

In 2012, Kevin Rudd was replaced by Bob Carr and the year started with a gathering storm. As an advocate, I’ve learned that what has been won can be lost. Minister Carr announced delays to the implementation of the 0.5% GNI/ODA commitment. With a bang (not a whimper) the bipartisanship built over four years in support of this modest scale-up of aid was lost. The sector rallied, but it was not enough. 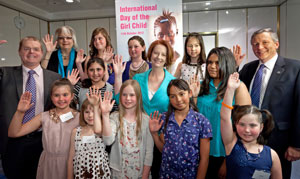 The AusAID Civil Society Engagement Framework in the first half of 2012 was a fight to have civil society considered as a development actor, not a messy modality to be controlled. A very technical document was launched after a robust consultation process. It was still a good start and a major conceptual win for the sector, in the same way as the Development for All Disability Strategy is a values statement about inclusive development as much as it is a very practical document.

Rio +20 was a damp squib, and the G20 in Los Cabos was still too Eurocentric, but at least the AgResults initiative was a good one, and the announcement that Australia would host the G20 in 2014 brought great opportunities for the sector to push to host a C20 and model policy input from civil society. Winning a seat on the Security Council also brought hope for a stronger global perspective in Cabinet and more (but not enough) resources for DFAT’s peace and security work.

The highlights for 2012 were some massive wins for gender equality. The National Action Plan on Women, Peace and Security was finally released, with the Australian Civil-Military Centre doing important work around training and coordination. The Pacific Women Shaping Pacific Development program is the closest AusAID program to my heart ever launched. Long term and politically savvy, it is the result of decades of lobbying from Pacific women and their supporters. Minister Carr pledged big at the Family Planning Summit, and the sector got organised on this crucial issue, forming the International Sexual and Reproductive Health Rights Consortium. The PM heard from the sector that she should be a gender champion at a CEO Roundtable in October and she was in great form at the first International Day of the Girl Child, days after her misogyny speech went viral.

Another highlight was the Humanitarian Forum, which achieved the thought-leadership space needed by the sector and presented to over 50 parliamentarians the sound evidence base for earlier action to prevent crises.

The sector has made huge progress in the partnership between universities and practitioners, with deep discussions about ethical practice and a tremendous conference on participatory development. In a true reflection of ACFID’s values, it was full of young people from developing countries, with lots of members sharing wisdom and lots of deep learning. I hold strong hopes for the professionalisation agenda for the sector and the development of youth engagement strategies led by young leaders.

Dark days are ahead. On a trip to Myanmar, we heard that the aid budget would be plundered again to support Australia’s misguided domestic refugee policy. And so my time at ACFID ended in 2012 as my time at ACFOA had in 2002, with the aid budget distorted away from its aims, good policy process abandoned, and asylum-seekers denied their rights. The May Budget also looks bleak. The sector must be united and on the record.

If there is a change of government in September, the sector may face new political challenges as the Coalition seeks a surplus. Julie Bishop has been clear on her direction for the aid program, not least in a 2012 speech at the Development Policy Centre. No government wants to lose community sector support, but much of the program is tied into bilateral agreements and MDB replenishments that cannot be undone without serious foreign policy consequences. Humanitarian spending and NGO programs may be targeted. If so, everything the Coalition has said about effective aid making a real impact in alleviating poverty should be repeated back to them.

Looking at the big picture, Australian NGOs only get 16% of their funding from government. The sector has worked hard to ensure independence. The advocacy focus for 2013 will be on making sure Australia’s ODA helps poor people through the delivery of quality projects. A united voice for the rights of poor people heard during the September campaign is worth the investment.

These views are personal and do not reflect those of ACFID or any ACFID member.

Susan Harris Rimmer has recently joined ANU’s School of Regulation, Justice and Diplomacy as Director of Studies at the Asia-Pacific College of Diplomacy. She was previously the Manager of Advocacy and Development Practice at the Australian Council for International Development (ACFID).