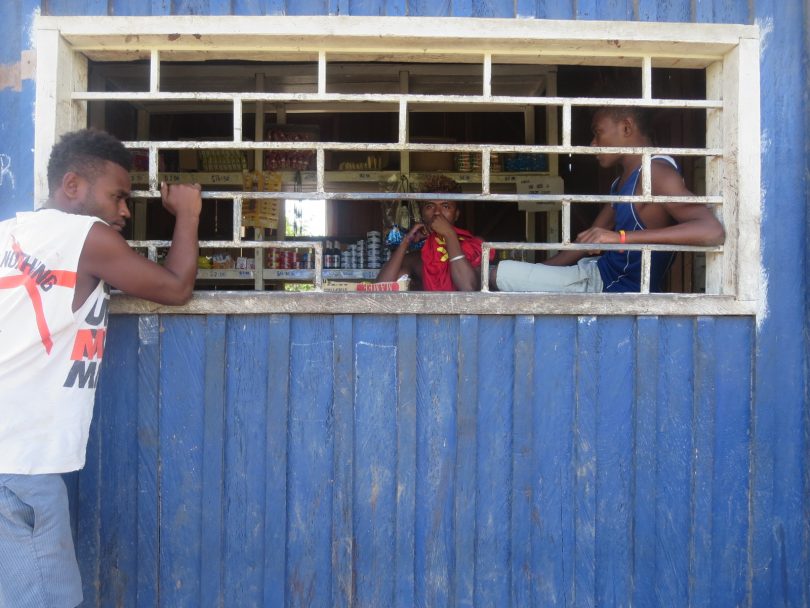 Throughout the 1980s and into the 1990s it was rare to read anything about PNG without being confronted by warnings about the dire law and order situation that befell the country. The key bogeyman of scholars and mainstream commentators alike were ‘raskol’ gangs – predominantly male criminal groups associated with settlement communities. The last two decades, however, have seen a marked reversal, with declining gang membership and crime, as well as a drop in academic and mainstream attention towards raskols.

Just how and why change occurs is the predominant question to befuddle development scholars and practitioners. Nascent research from PNG’s and Solomon Islands’ settlement communities provides tentative pointers around how these environments change – how places once perceived to be wracked by crime and home to a criminal underbelly turn good. And the findings have little to do with technical fixes or state-assisted interventions.

Burns Creek is a peri-urban settlement located eight kilometres to Honiara’s east with a population of around 5,000 people. It is a relatively new community, habitation of scale occurring in the early 1990s. A dominant contemporary public narrative around Burns Creek relates to its reputation as a breeding ground of criminality and a place of anti-social and criminal conduct. While there is no police data to shed light on this position, limited quantitative evidence, court records and anecdotal evidence suggests that from the end of Solomon Islands’ civil conflict in 2003 until around 2010, Burns Creek was home to a number of young men who were actively involved in crime within their community and across Honiara.

The extent to which Burns Creek was subject to mainstream demonisation was demonstrated by the levels of such provocation. In 2006, the Sydney Morning Herald, in a rare case of mainstream Australian interest in urban Solomon Islands, did its best to convey the lawlessness of the community. Burns Creek was comprised of a ‘lost generation’ on the verge of delinquency. Parliamentary debates within Solomon Islands were somewhat more measured. In 2008, the Leader of the Opposition stated that Burns Creek residents had “become an easy target to lay blame on for crimes committed in the city”.

The Burns Creek story, however, ultimately tends to redemption and rejuvenation, demonstrating that places can change, and relatively quickly. Today the position around crime in the community has almost wholly reversed. The 2013 data from an annual survey showed a remarkable turnaround on earlier iterations. Burns Creek respondents were asked how they would describe the “law and order situation” in their community. In 2009, some 71 per cent nominated that there were “many problems”, with none agreeing that Burns Creek was “safe and peaceful”. Come 2013, only 12 per cent of those surveyed agreed with the former proposition, and 16 per cent believed the community was “safe and peaceful”.

My discussions with Burns Creek residents concurred with these findings. If anything, since 2013 the place had become even safer and more peaceful. What had led to this dramatic reversal? Although describing ‘gangs’, in part, my findings accord with those recorded by Craig and Porter concerning urban PNG: “… PNG’s urban gangs have failed to institutionalise in recent decades. Gang members have been “growing out of crime” in numbers that have outpaced generational renewal…”.

In Burns Creek, a common explanation proffered for a perceived decline in criminal conduct was that those men who had once been involved in such behaviour no longer were. Over and over, residents pointed out that one-time instigators were now married with children. As Craig and Porter suggest, their criminal behaviour had not “institutionalised”. But transition brought about by a mellowing passage of time was only one reason proffered, and not necessarily the most important, particularly because there had been ample generational renewal in Burns Creek capable of replacing now senior, once criminally-inclined citizens, and alternative community-led regulatory arrangements had not evolved. Rather, for residents, a collection of perhaps banal reasons – none of which were related to direct state intervention – were key.

Sporting-related sanctions: The structured engagement that came from organised sport provided a periodic reprise from anti-social behaviour. But the key deterrent was not involvement in sport alone, but the exclusion of participants if they were found drinking alcohol during competition periods. Given an apparent positive correlation between criminal conduct and alcohol consumption this simple rule, largely enforced by peers, was identified by many as being a surprisingly effective, albeit temporary, fillip to stemming anti-social behaviour.

Church and school: As the settlement had grown, so too had the physical presence of churches. Now, Burns Creek is home to seven churches. Multiple denominations existing in rural Solomon Islands’ have been identified as a source of potential conflict, but it is possible that in more anonymous urban environs the opposite is true. For some young men, church-affiliated youth groups were nominated as the most positive influence in their lives. Likewise, a primary school had sprung up in the community – started by residents without state assistance.

Acculturation: Burns Creek was a relatively homogenous environment, comprised mainly of two language groups from Malaita. Historically, subterranean antagonisms had characterised their relationship, occasionally erupting into violence. Various informants pointed to population growth as a cause of increasingly varied inter- and intra-ethnic affiliation and as a means of stemming such hostilities. Inter-ethnic marriage was becoming increasingly common. Similarly, pushed by the expense of living in the city, the settlement had become home to a sizeable working class. Teachers, police, nurses and even a national member of parliament resided there. A number of informants suggested this working populace had a ‘cooling’ or ‘civilising’ effect on the wider community.

Oversight: In a variation of the phenomena of CCTV cameras, an increase in the settlement’s population had resulted in more eyes on potential troublemakers. This assisted in deterring less hardened perpetrators, particularly when combined with there being fewer public spaces where groups could congregate without potential intervention. One informant linked this with (Malaitan) ‘kastom’ strictures, with news of nefarious activities quickly spreading amongst ‘wantoks’. This had the potential to ‘bring shame’: indelibly staining an individual’s, and, perhaps more importantly, their kin’s, reputation.

None of the above is to say that Burns Creek is now a model community. Crime still occurs regularly. But for the reasons outlined, and others, it is no longer the hotspot it once was. Similar to parts of urban PNG, lingering perceptions amongst the wider populace have been slow to catch-up with this contemporary reality: Burns Creek is now no more dangerous than any other location in Honiara, and in some respects may be even safer.

Daniel Evans is a PhD candidate in the ANU Coral Bell School.