CARE’s Integrated Community Development Project (ICDP) has been implementing activities in collaboration with district and local level government (LLG) authorities, as well as local NGOs and communities, in three disadvantaged districts of Papua New Guinea for some years.

The results of CARE’s collaborations in Obura Wonenara, the district where the project has been implementing the longest, are impressive and include: 7,000 children enrolled in school, who would not otherwise have had the opportunity; eight new village courts (which include female magistrates and clerks) where there were none before; establishment and training of ward development committees, and local identification of ward development priorities for a population of about 78,000; LLG project funding allocations for ward priorities; government officers being more engaged with grassroots communities; nearly 18,000 people with greatly improved access from the construction of seven footbridges (the majority funded through provincial and district development funds); and people in the most remote locations eating more protein-rich diets, and growing subsistence crop varieties that are more drought tolerant.

CARE’s ICDP is in the first year of what is anticipated to be a five-year project expansion and consolidation in its three target districts. What follows is a snapshot of the working environment for our government partners in one of these districts.

It had been some time since we last had a courtesy call and update meeting with our partners in Obura Wonenara, so we planned a short trip. Ringing ahead the week before our planned visit, we confirmed that we would be able to meet with the District Administrator (DA), some senior District Administration officers and LLG managers. We also arranged to meet with the local member (MP). We rang again the day before the visit to re-confirm.

Arriving as planned, we called the DA and he said to please come to his office. Here we found him in a room full of men and women – mourning mud covering their faces. He was in negotiations, with the hope of avoiding the escalation of a recent murder into tribal fighting. Apologising for our disruption to their discussions, we postponed our meeting to the next morning.

For the afternoon, we decided to take a drive to Obura, in the middle of the district, and observe how people’s food gardens were progressing as they recovered from the drought. On the way we passed the MP in the front passenger seat of a district development grant-funded police vehicle. He confirmed that we could meet with him in the morning, but not at the District Administration offices due to a two-day power cut. He was on his way to pick up the DA so that together they could visit the community where the murder had recently taken place. The week before, he and the DA had spent much of their time dealing with tribal fighting and multiple killings in another part of the district. The fighting and deaths were retaliations following a death attributed to sorcery, which the MP believes ultimately has its roots in an ongoing land dispute.

On our drive to Obura and back we observed the beautiful new food gardens people have planted. Within two to three months they will start to have a steady supply of their staple foods once again. In the meantime, despite the challenges of insect damage and some crops rotting before they ripen – and the detrimental effects of too much rain – corn, pumpkins and beans have started to ripen, creeks and springs are re-charged, and life is starting to look more hopeful. 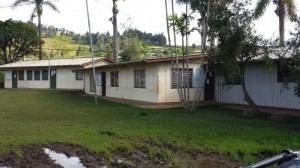 We arrived back at the Obura Wonenara District Administration office and waited for the return of the District Elementary Coordinator. He had taken a two-hour bus ride to the provincial capital that morning to visit the provincial head quarters and obtain a list of the trainee elementary teachers accepted into the PNG Education Institute (PNGEI), as well as a list of the postings for teachers for the year. He was dropped off late in the afternoon. He and I went to his office where we discussed the PNGEI list. Only one person from the district was on the list. We discussed options for finding out why others we had expected to be included weren’t – and what could be done about it. We agreed to meet early in the morning so that he could see me before the rush of teachers, who would be arriving to find out where they had been posted. I then left the administration buildings, making way for those public servants who sleep in the offices when there is no other accommodation available.

Teachers were meant to be at their schools almost two weeks previously, but their placements were only now available. Demonstrating how politicised senior public service positions have become, the provincial administration had been in disarray for months as two men and their supporters contested for the position of Provincial Administrator (PA) – one being supported strongly by the Provincial Governor. In the interim, the provincial administration had almost completely stopped functioning. One week before, a court decision had established one of the contenders as the acting PA, pending a “final decision” by the National Executive Council (cabinet). With an acting PA, critical pieces of paperwork could finally be signed off by the administration – including teacher postings.[1]

The next morning, after meeting with the elementary coordinator again (who already had a queue of teachers waiting to see him), we went to another venue to meet with the MP, DA and senior officers. Here the MP was at first busy on his mobile – trying to find out why the power had been disconnected from the district administration offices, and what needed to be done to get it reconnected. He and the DA and LLG managers were also preoccupied with finding a way to have the printer, used for printing official district cheques, fixed.

During the meeting we discussed plans and schedules, and were frankly updated on various matters. For example, last year the district should have received K10 million in development grant funds (DSIP – District Services Improvement Program). It should also have had access to a further K5 million for additional health and education development projects. The district apparently submitted the required proposals in order to access and use additional health and education funds, but had not yet received any allocations. The MP and DA said they had heard that the education and health development grant was now going to be reduced by half, but they weren’t hopeful that any of this would actually come through. By the end of last year, the district had received K6 million of the K10 million DSIP  grant that it was meant to receive, and none of the K5 million in health and education development grants. That is, it had only received 40 per cent of the available development grants. In November of 2015, the district had received official financial instructions that K2 million of the development funds it had received could be used for drought response. In the words of the MP, ‘it was too late – we already had budget allocations for our DSIP, it was really too late. We found little bits and pieces of money to help with our longer term drought response.’

The situation that the Obura Wonenara District Administration and MP find themselves in is not uncommon. They know the intricacies of the problems they face in more intimate detail than anyone. Despite this, or perhaps because of this, they keep working towards the changes that they envision for their district. Contributing to their positive vision is their continuing partnership with CARE to improve the ability of political and administrative governments to collaborate to make sustained, positive change for and with the people of Obura Wonenara.

[1] Since writing, the PA position has changed again, and consequently the position of Provincial Director of Education has also changed, potentially nullifying all current teacher postings signed off by the previous Director.