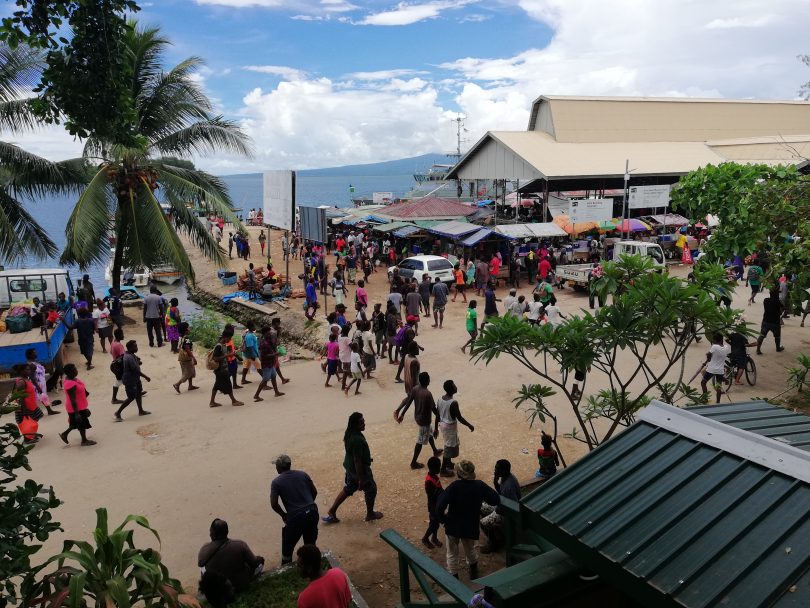 The National Democratic Institute (NDI) conducted a national survey in April–May 2021, to understand the main concerns of Solomon Islanders related to the COVID-19 pandemic, including their awareness of public policies and attitudes toward vaccines. The Solomon Islands cabinet has set a national vaccination target of 80% coverage by November 2021, and has recently approved mandatory vaccination for all public servants, state-owned enterprise workers, and private employees undertaking frontline work.

The research, which included 1,200 phone interviews and six face-to-face focus group discussions in Honiara, Malaita and the Western Province, shows that the measures taken by the Solomon Islands Government to prevent the spread of COVID-19 are largely seen positively. 87% of respondents think the government is doing an excellent or good job of preventing the spread of COVID-19.

However, public opinion remains sharply divided about accepting the vaccine. Despite the government’s awareness campaign, including the Prime Minister himself taking the vaccine, most research participants said they do not know enough to make an informed decision, or don’t feel it is necessary to get vaccinated as the country is COVID-19 free.

Less than half of Solomon Islanders (48%) expressed willingness to get a vaccine when it becomes available. The same share are unwilling. Men, particularly men aged 45 years or older, are more willing to be vaccinated than their female counterparts, as are residents of smaller provinces. Population groups most resistant to getting a COVID-19 vaccine include respondents under the age of 45, Malaitan men, and current students. Relatively few are on the fence – the two most popular categories are “very willing” (36%) and “not willing at all” (34%).

Misinformation is prevalent, and many people are not convinced that it is in their best interest to get vaccinated. Social media and word-of-mouth seem equally prolific in spreading fake news. Rumours about conspiracies and medical side effects of vaccines are generally constructed around an authority figure – an official or someone working in the medical system – and the information is passed through social media or word-of-mouth by wantoks.

Rumours generally mention side effects that lead to serious illness or death. Stories paint very vivid and frightening images, such as somebody taking the vaccine and blood running down their nose, or a nurse who collapsed in hospital after receiving the vaccine. Other rumours revolve around religion, especially imagery pertaining to the New Testament Book of Revelation, and spread fear that the vaccine contains “the mark of the beast”.

For example, a man in Honiara said, “What I heard on the radio yesterday, Seventh Day Adventist church decided they will not take this vaccine based on their religious belief, saying it is a form of 666.”

Despite saying that they don’t trust these rumour sources, some focus group participants remain concerned about the potential negative side effects of the vaccine that they predict will happen.

These concerns, however exaggerated or irrational, need to be addressed in order to effectively reduce vaccine hesitancy, and if the mandatory vaccination policy is actually going to be implemented. There is a need for a comprehensive awareness campaign using clear messages and credible spokespersons, such as WHO representatives, the Ministry of Health, and medical personnel, to provide information and reassurance. However, medical explanations will not convince those who hold strong religious beliefs that the vaccine is harmful. Religious leaders – some of the most trusted individuals in the country – need to dismiss rumours and endorse pro-vaccination messages, including by personal example.

Another source of public concern is a lack of government transparency and accountability around the COVID-19 economic stimulus package (ESP). In contrast to the strong approval of the government’s anti-COVID-19 health measures, there is near universal agreement that there is a lack of transparency when it comes to communicating about and disbursing the ESP. This complaint fits into broader criticism about the opaque manner in which major public policy decisions are made, including on foreign relations, constituency development funds, and local development.

A widespread lack of awareness about the ESP has led to unrealistic expectations across provinces which, unmet, channel people’s frustration toward the government and those groups or individuals suspected of benefiting unfairly from the program. A key source of confusion is related to who qualifies to apply for funding and under what conditions. In the absence of clear qualification criteria and verification mechanisms, research participants were concerned that the ESP has opened opportunities for preferential allocation and misuse of money.

In sum, our research finds that communication is key: both about economic support in the face of COVID-19, and to overcome deep-seated vaccine hesitancy.

This research was supported by funding from the United States Agency for International Development (USAID) to the Consortium for Elections and Political Process Strengthening (CEPPS). The analysis and interpretation herein are those of the author and do not necessarily reflect the views of USAID or the United States Government. The National Democratic Institute would like to acknowledge Tebbutt Research for fielding and conducting primary analysis for this research.

Ancuţa Hansen is the National Democratic Institute Director for the Pacific Islands. She was a political organiser, election candidate, and elected official in her home country, Romania.