2014 was the most deadly year for terrorism on record with deaths from terrorism rising by 80 per cent from 18,111 in 2013 to 32,685. Most of these deaths were recorded in just five countries with Iraq, Nigeria, Afghanistan, Pakistan and Syria experiencing 78 per cent of all deaths.

The Global Terrorism Index (GTI) – an effort to measure the direct and indirect impact of terrorism in 162 countries in terms of its effect on lives lost, injuries, property damage and the psychological after-effects of terrorism – demonstrates that terrorism cannot be understood in isolation. Statistical analysis of the patterns of terrorist activity since 1989 found that there are two factors most closely associated with terrorism. These are the levels of political violence committed by the state, and the level of armed conflict within a country. 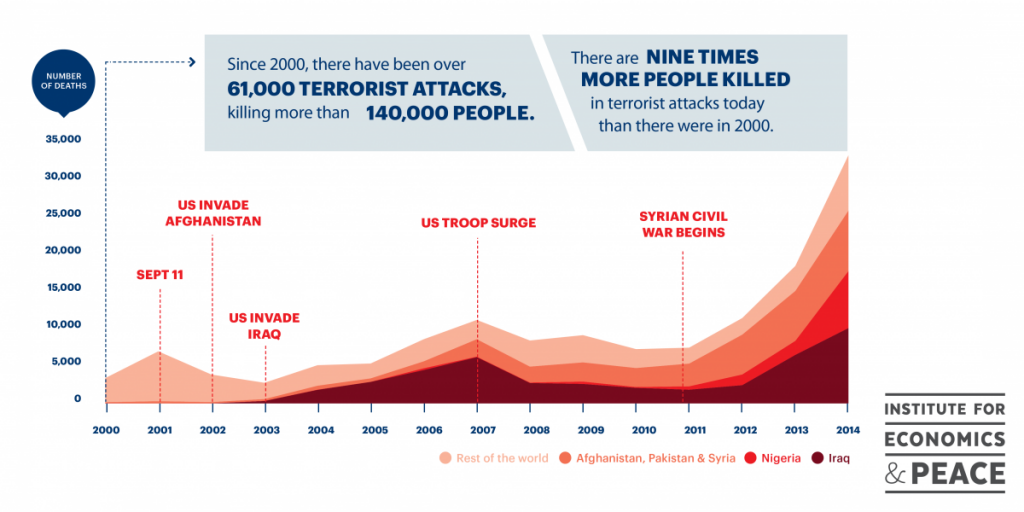 While there is no overall trend between terrorism and poverty, unemployment and lower opportunities are a driver for some to join terrorist groups. In Africa for example, both Boko Haram and al-Shabaab operate in the poorest parts of Nigeria and Somalia and actively seek out disenfranchised young men. Furthermore, perceived economic injustice can be a major motivation for terrorism. The Fulani militants, a group active in the Middle Belt of Nigeria, are made up of pastoralists whose victims are almost exclusively farmers. Whilst there are some other dimensions to the conflict, including religious differences, it can be viewed as primarily a resource dispute.

Three regions of the world are mostly impacted by terrorism: the Middle East, South Asia and sub-Saharan Africa. To learn more, read the full report.

Camilla Schippa is Director of the Institute for Economics and Peace.