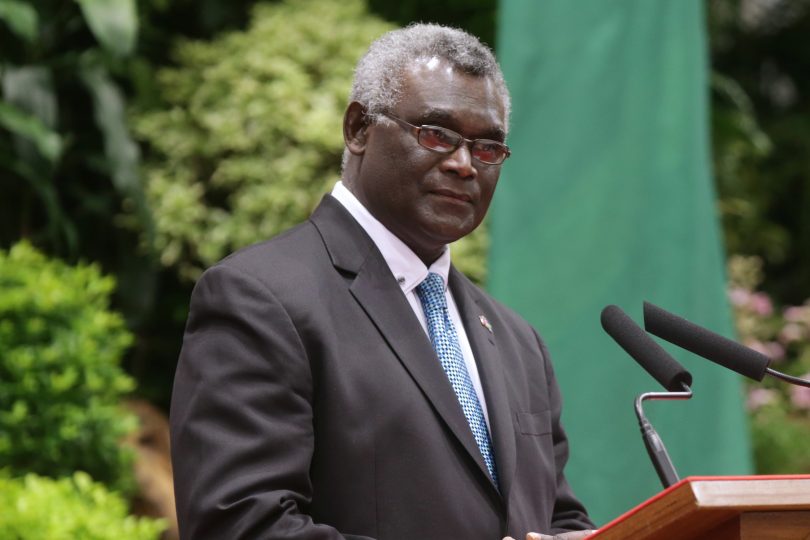 On 24 April, Manasseh Sogavare was declared Solomon Islands’ Prime Minister. This prompted first protest, and then riots and looting. Why?

The riots were largely an inchoate expression of anger – people empowered by the fact they had numbers on their side. The looting was opportunistic – people taking advantage of a breakdown of law and order. But what about the protests themselves? The first spark. Why were people angry? Why were they protesting?

This footage of the initial protest at parliament is illuminating. In between imploring people not to throw stones, one of the protesters, a spokesperson of sorts, angrily contrasts the protesters’ economic situation with that of the newly-elected politicians before saying in Pijin, “Sogavare step down. That’s all we need. We want a new one [Prime Minister]”. The protesters’ problem with Sogavare wasn’t necessarily personal; he was a popular politician once, but in 2019 he was returning for his fourth stint as prime minister. To the protesters he was an embodiment of the status quo. The footage ends with the protesters chanting in English, “We need change. We need change!”.

There’s no justifying violence, vandalism, and looting. But those first protesters had a point. They do need change.

This chart shows GDP per capita over time in Solomon Islands, with the mean for Sub-Saharan African countries included for comparison. Data are from the World Development Indicators.

GDP per capita over time 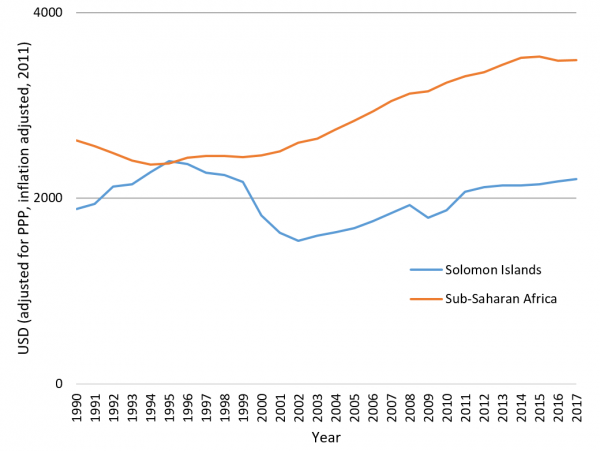 This next chart shows the World Bank’s measure of government effectiveness for Solomon Islands. The World Bank has other governance measures and, to be fair, Solomon Islands has improved on some of those measures. (All data are here.) But government effectiveness is the most relevant measure for trying to explain the protests – it captures what the government is directly capable of doing to assist its citizens on a regular basis. 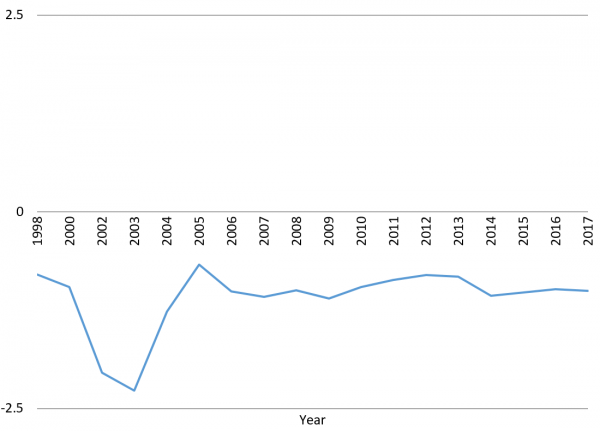 As the chart shows, government effectiveness is not improving.

With an economy in the doldrums and a government capable of doing little to help its people, there’s an appetite for change in Solomon Islands. Particularly amongst those at the bottom of the heap. It’s hardly a surprise.

What does this mean for aid? Stagnation leading to protest and riots doesn’t sound good. Aid agencies aspire to be change agents, after all.

To give aid workers their due, some aid has helped Solomon Islands. As I said, aspects of the country’s governance have improved, and aid, alongside some Solomon Islands civil servants and parts of civil society, deserves credit for this. Aid has assisted in other areas too: electoral quality, Malaria reduction and policing are examples. Aid is helping. Aid can’t do everything. Even so, it’s hard not to see the frustration of those protesters and look at charts showing stagnation, and wonder: couldn’t aid do more?

The Australian government is clearly asking itself this question. I estimate, based on OECD Creditor Reporting System data, that between 2003 and 2014 about 75% of Australian bilateral aid to Solomon Islands was spent on governance. In this financial year, according to the latest Orange Book, just 28% will be spent on governance. (It’s possible that this one year figure may overstate the change; regardless, a major shift is afoot.) While some governance aid helped in the past, and while some needs to be continued, it is reasonable to shift aid’s focus and try something new.

The problem is that the government has lurched away from governance and towards infrastructure. An undue focus on infrastructure would be a mistake. Even setting aside donor motives, large infrastructure projects are difficult in poorly governed countries like Solomon Islands. There is a better approach.

A better alternative would be for donors working in Solomon Islands to admit there’s a lot to learn – and then to bring learning and flexibility to the fore in their work. In practice this would involve:

No fixed preference for any particular sector. If it works, aid can meet many needs: economic development, governance, human development, and more. But aid needs to work to do this. Donors should let need and efficacy drive their focus, not their own preferences for particular types of work.

Flexibility also needs to be coupled with learning. In challenging contexts like Solomon Islands, donors need to up their investment in gold standard evaluations – endeavours which aren’t subjective, or afterthoughts, but which bring the knowledge needed to decide, on the basis of effectiveness, whether work should be continued, abandoned, scaled-up, or modified.

Learning also requires donors to build their own country expertise by employing more staff who know the country well and to build systems for retaining the lessons of previous work.

In addition, learning requires employing more staff, full stop. This will increase costs, but it will also afford staff the time to learn, build relationships and make decisions in countries where giving aid well is hard.

In countries like Solomon Islands, donors should also use other development tools alongside aid, such as promoting and facilitating greater labour mobility.

What I’m suggesting isn’t radical; it would fit with approaches like Problem Driven Iterative Adaptation. Nor is it associated with any particular political ideology. It’s practical, that’s all.

Some aid already helps Solomon Islands. Some aid will continue to help. But our approach to aid giving needs to evolve if aid is to contribute to the one thing Solomon Islands needs most: change.