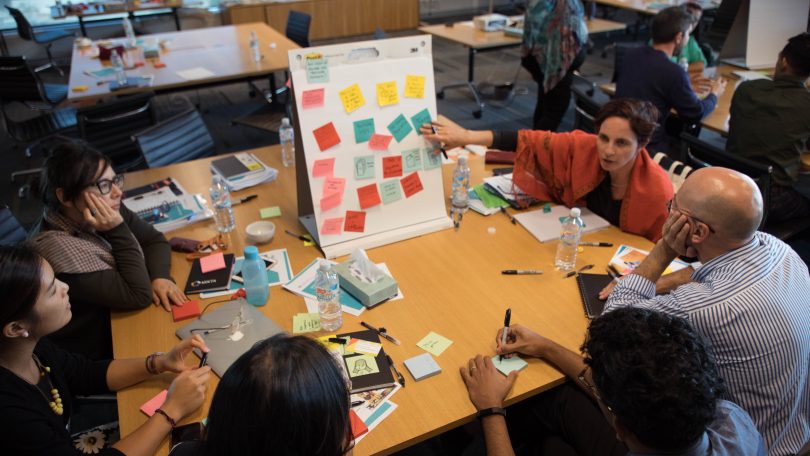 Late on Friday, 5 November 2021, a soft click, lights out, the end of a chapter. After five years of supporting DFAT’s innovation aspirations, initially through the innovationXchange (iXc), the Innovation Resource Facility (IRF) closed.

The iXc was established as the development innovation hub within the Department of Foreign Affairs and Trade (DFAT). The IRF, managed by DT Global, was conceived as an agile resource facility to support the small iXc team, capable of rapidly sourcing additional technical expertise to support the iXc and the broader directions of the aid program. At the core of the IRF’s service offering was its provision of fund management services for DFAT innovation portfolio investments to improve efficiency and reduce risk.

The launch of Australia’s new Aid Policy in 2014 signalled an intentional focus on and investment in innovation. The Policy drew a great deal of commentary. This includes the Development Policy Centre’s and some thoughts I co-authored on innovation and the possibilities for the Australian aid program. In 2015, the iXc was launched and in November 2016, the IRF commenced. Some time later, DFAT published its 2018-2021 Innovation Strategy within which there were many signs of a journey towards a deeper embedding of innovation within DFAT. In late 2020, the iXc was abolished with personnel and functions being absorbed into DFAT. The IRF continued its role to support innovation@DFAT, reporting into the Business Partnerships and Carbon Markets section. The IRF completed its full contract term.

While it is appropriate that the closure of the IRF draws much less fanfare than the Policy and iXc launches, it would be a shame if it fades as silently as the iXc did, because there are some worthy reflections after five years.

Principal amongst these reflections is that we should celebrate the vision of the then Foreign Minister, the Hon. Julie Bishop. While I don’t fully subscribe to Ms Bishop’s description (reported widely) of the iXc as a “gorgeous little funky, hipster, Googly, Facebooky-type place”, I consider it quite unfair that the iXc was sometimes treated like a punching bag – although it was a different type of bag that most often drew commentary, including in Senate Estimates. It should be no surprise that creativity flourishes in some workplaces and not others; environment matters.

The original leadership of the iXc, those behind the vision for the IRF, should also be recognised. The model they shaped included contracting approaches that facilitated flexibility, responsiveness and value-for-money, and encouraged new, previously untapped, expertise to support the aid program. Led by DT Global, the IRF was served by a consortium (UTS Institute for Sustainable Futures, OpenIDEO, GKI, Struber) to technically and operationally support iXc requirements.

In establishing the IRF, we took an early decision to introduce some business-model innovations, deviating slightly from original concept thinking. We did not establish a separate office down the road from the iXc. Instead, we co-located within the iXc. We did not provide a communications person flying solo. Instead, we provided a demand-driven communication agency model. We were not all located in Canberra. Some resources were home-based, and everyone was supported by enabling technology. When the impact of COVID-19 triggered remote working, this was close to business as usual for the IRF. And it worked because, at IRF commencement, the iXc and DT Global invested time to establish healthy ways of working; these were joint and shared decisions.

There are more successes than space permits. In the last five years, the IRF supported, managed and provided oversight to programs in 33 countries, including 86 innovation grant projects. The first innovation grant focused on mapping healthcare in Asia-Pacific. Tupaia continues to support the Indo-Pacific Centre for Health Security. Since the implementation of this platform, there have been measurable improvements in the supply and delivery of pharmaceutical and medical supplies and in the implementation of treatment guidelines. The platform has also expanded to support disease surveillance, environmental health and COVID-19 response efforts.

Five years later, and within days of the IRF closing, The Pacific Island Food Revolution (PIFR) transitioned from a project to an independent entity. PIFR is a social and behaviour change communication program that takes an innovative, evidence-based, and culturally-grounded approach to addressing the Pacific’s non-communicable disease crisis. Its signature is a television show where contestants from Fiji, Samoa, Tonga and Vanuatu compete against each other using local cuisine. Amongst other positive findings, PIFR’s three-year impact assessment noted a correlation between viewership and improved dietary behaviours.

Innovation has always been alive in the aid program, but the former Foreign Minister challenged us all to do more “to solve seemingly intractable development challenges in the Indo-Pacific.” I would argue that innovation now features more prominently in the way DFAT operates and focuses. That is a positive legacy.

DFAT may have moved on from innovation to other preoccupations, but everyone involved in delivering on the former Foreign Minister’s catalytic vision should be proud of their contributions. As this chapter comes to a close, it is incumbent on all who support the Australian aid program to continue exploring new possibilities.

Mel Dunn shaped DT Global’s original approach to the IRF and was Contractor Representative for the whole five years of the Facility.

Mel Dunn is the Chief Strategy Officer at DT Global. He is responsible for ensuring that DT Global’s initiatives and efforts lead to delivering better development outcomes that prioritise value creation for our people, partners, clients and stakeholders.