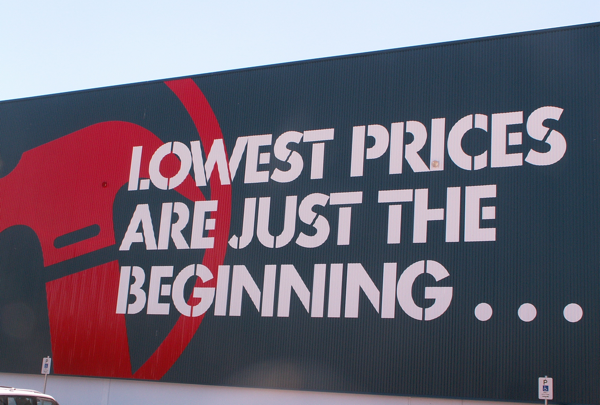 At a lecture last year to DFAT graduates, I was explaining why developing countries are, as the hardware chain Bunnings claims to be, characterised by lower prices. It’s known as the Penn or the Balassa-Samuelson effect. And it means you can buy more with a dollar in a developing country than a developed one. The economic reasoning is simple: labour costs are lower in poorer countries because wages are lower. Traded goods might be subject to the law of one price (their price should be similar across countries) but non-traded goods are not. Because workers are paid less, restaurant meals, haircuts, and taxi rides are all cheaper in Hanoi than Sydney.

I had a picture to prove my point. In the graph below, with data from the World Development Indicators, each dot represents a country. The horizontal axis shows (on a log scale) each country’s per capita income, measured in US dollars. The vertical one is an estimate of the number of US dollars needed to buy one US dollars’ worth of goods in the country (this is measured in studies of what are called purchasing power parities). Obviously, that value is one in the US. But, as you can see from the graph, it is more than one for many rich countries, and much less than one for poorer countries. In fact, it is only half or less for many poor countries. While there is a lot of variation, on average, purchasing power falls with income: the blue trend line has a positive slope. 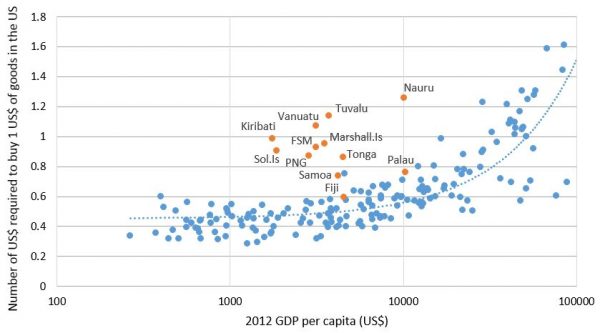 In the graph I showed to the students, the dots were all blue. One of my students asked about the group of dots with income between US$1,000 and 10,000 that sits well above the others. It turns out that those countries are nearly all from the Pacific – in the graph above, coloured in orange. It is remarkable how clustered the Pacific countries are on the graph. And how expensive they are, given how poor they are. Pacific countries are fundamentally different to other developing countries in this regard. Only Fiji is anywhere close to the trend line.

Why does the Penn/Balassa-Samuelson effect not hold in the Pacific? Why are their prices so high? One reason is their remoteness and small size. Trade costs are expensive, and even non-traded goods have traded inputs. Electricity is non-traded, but the generator used to produce it needs to be imported. Land is also very expensive in the Pacific.

A second reason is the dominance of aid and in some countries, remittances. These sources of foreign currency push up the demand for domestic currency and/or domestic prices without necessarily raising GDP.

A third reason is the highly dualistic nature of these economies. If you live in the informal sector, prices are cheap (e.g. for the food you grow yourself). But the prices measured here are probably much more representative of the formal sector. Here, prices are often set for multinationals and for aid-funded consultants.

I’m not sure how important each of these three reasons is. But Fiji seems to be the exception that proves the rule. Fiji is larger than most Pacific economies. Aid is not that important (though remittances are). And the Fijian economy is one of the least dualistic of the Pacific. There are few big resource projects.

What can the Pacific do about this? Those countries which have their own currencies could consider devaluation. (No Pacific countries have floating exchange rates.) Some of the gains in terms of competitiveness would be lost via domestic inflation, but by no means all. However, while this may be good policy advice, it is of limited value. For a start, many Pacific islands use another currency: only six have their own. Moreover, urban elites dominate Pacific politics, and will resist depreciation unless there is a compelling argument for it. As there is with Fiji: its reliance on tourism is made possible because its prices are relatively low, and this gives it a strong incentive to keep its exchange rate competitive.

Pacific countries also need to get non-traded costs down, from energy to land to law and order. That would be possible by reform, but it’s a tough reform agenda.

Visitors to the Pacific often comment on the high prices, and others have found that Pacific countries have overvalued exchange rates. But the international perspective is useful, and I’m grateful to the curious DFAT student who asked the question in class. The comparison also shows just how poor some Pacific countries are. Using US dollars, the poorest Pacific country, Kiribati, is only the 48th poorest country in the world. Using purchasing power parities, it is the 20th poorest, and the poorest outside of Africa after Haiti.