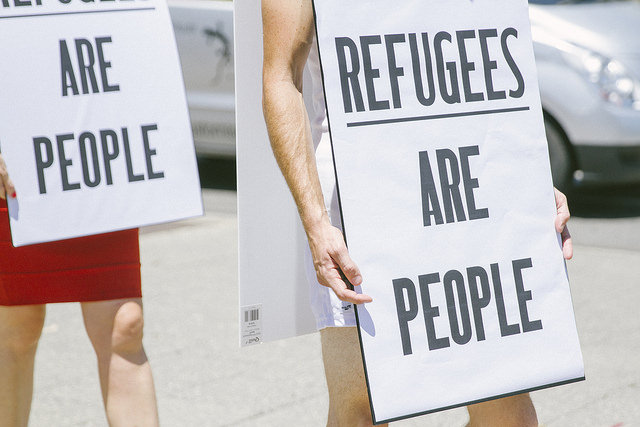 While the details remain sketchy, the Australian Government’s recently announced resettlement deal with the United States may finally provide a pathway towards a safe and prosperous future for refugees who have spent years languishing on Nauru and Manus Island.

I met many of the asylum seekers on Nauru during the time that Save the Children was contracted by the Australian Government to provide welfare, education and recreation services to asylum seekers living there.

Based on the determination and resilience they displayed to me, I have no doubt many will go on to do remarkable things: becoming doctors; teachers; academics; business leaders; politicians: humanitarians; and artists.

For Save the Children, our engagement on Nauru was one of the most political charged and ethically fraught programs we have been involved with in our recent history.

As I argue in my recent lecture and paper, our work on Nauru went to the heart of a humanitarian dilemma we constantly face all over the world: the tension between idealism and pragmatism.

On the one hand, founding documents like the Red Cross Code of Conduct, signed up to by many NGOs, including Save the Children, state that the “Humanitarian imperative comes first—the right to receive humanitarian assistance, and to offer it, is a fundamental humanitarian principle which should be enjoyed by all citizens of all countries”.

From our work in refugee camps in source and transit countries around the world, we were only too aware of the vulnerability of asylum seekers sent to Nauru and their need for protection and humanitarian assistance. Given the restrictions placed on accessing Nauru, it was unlikely we could access asylum seekers and provide humanitarian assistance any way other than accepting the then Labor Government’s offer to provide contracted services.

The situation on Nauru raised similar tensions. The deterrent focused policies of successive governments were a clear violation of international human rights law, particularly the Convention on the Rights of the Child. If we accepted the Government’s contract, we wanted to be confident that we would not be complicit in the Federal Government’s breach of international law.

In the case of Nauru, we resolved this dilemma by agreeing to provide services on condition that we retained our right to publically advocate.

I personally communicated this condition to the Secretary of the Department, Martin Bowles, Minister Burke and subsequently to Minister Morrison’s Chief of Staff when, some months later, the Coalition Government took power.

This mix of realism and idealism worked well for most of the period we provided services on Nauru.

Throughout 2013 and into 2014, we maintained a constructive relationship with the Department of Immigration. Many of our recommendations to improve conditions or outcomes for asylum seekers were accepted and, over time, implemented.

Perhaps the most significant success was in relation to education facilities. Initially, teaching was conducted in large non-air-conditioned tents in the regional processing centre where temperatures were recorded at up to 50 degrees Celsius.

Over time, we worked with the Department and other service providers to secure hard-walled, air-conditioned structures in the administrative compound to house the ‘school’.

However, as the duration of detention increased and the political pressure on the Government mounted, particularly after the Australian press also began reporting allegations of sexual abuse of refugees, our ability to effect change diminished. We also came under increasing pressure to sign up to contractual terms that we believed effectively constituted a gag clause.

Then, in October 2014, Minister Morrison effectively accused Save the Children staff of fabricating stories of abuse and even coaching asylum seekers to self-harm. The gloves were off. We could not allow our public reputation to be denigrated in this way. We responded with a press conference of our own, strongly rebutting the implicit and explicit allegations made by the Minister.

A number of Government inquires later, the reputation of Save the Children and its staff was restored and an undisclosed amount of compensation paid to us as a result.

However, our contract to provide welfare and recreational services had also been taken over by the for-profit Transfield (later known as Broadspectrum) and the school we had established had been closed.

Was it worth it?

We achieved significant improvements for the benefits of children and their families while we adopted a strategy that relied predominantly (but certainly not exclusively) on private advocacy.

Later, our first-hand experience working in the processing centre gave us real legitimacy and added weight to our public advocacy.

However, the ultimate test for us is whether we believe we have ‘acted in the best interests of children’, in accordance with article 3 of the Convention on the Rights of the Child.

In making the decision to work on Nauru, the answer to this question is an overwhelming yes.

Paul Ronalds is the CEO of Save the Children Australia. This post is based on a lecture he gave in October 2016, which is published as Devpolicy Discussion Paper 51.