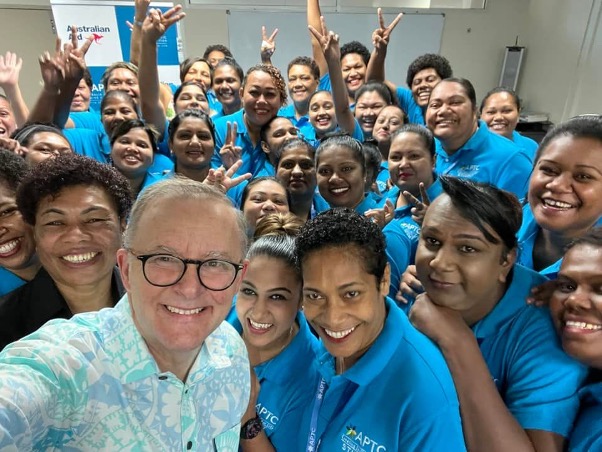 In Suva, new Prime Minister Anthony Albanese took a smiling selfie with Fijian aged care workers, who are preparing to come to Australia to look after our elderly in a new pilot program.

Raising the standard of aged care is a significant challenge that the Albanese government has prioritised – higher wages, better conditions, better career paths and better quality care are long overdue. Even with significant improvements to working conditions to properly value care work and attract a local workforce, migration will continue to form a part of the sector’s future.

The government has made it clear that it wants to increase the number of Pacific Labour Scheme (PLS) workers coming to Australia to work in aged care. Since the scheme’s commencement it has placed fewer than 300 workers in aged and residential care services.

There are good reasons to grow aged care participation in the PLS. The government has explicitly stated that it will enable more women to participate, which would improve gender equity in a so-far male-dominated scheme. The aged care sector is facing a significant labour shortage – with an estimated annual shortfall of 30,000-35,000 care workers.

And, yet, we have strong reservations. The PLS is a temporary work program. If a meat worker leaves Australia after four years, as they must on the scheme, it might be inefficient but the meat will not be harmed. If an aged care worker leaves after four years, those she is looking after will be. Aged care already suffers from a high attrition rate, with an estimated 65,000 workers leaving the sector each year. Australia needs a stable aged care workforce, not one that turns over every four years.

Under the current PLS rules, a worker can come to Australia for four years, then must go home for at least six months, and then can return for another four years. Some Pacific workers have already returned. This cycle can continue indefinitely. This makes little sense, and will be even odder if the family accompanies the worker, as will be allowed under Labor policy. Is the whole family to stay for four years, pack up for six months (say, in the middle of a school year) and then come back, to the same town, but have to find a new house? Even being away for six months would hurt aged care residents; sustaining relationships matters.

While in Suva, Albanese highlighted that leaving people as temporary migrants for extended periods of time was “not in the best interests of individuals or the nation”. Banning repeat migration would avoid this problem, but would make the aged care sector more reliant on temporary migrants.

The recent Royal Commission into Aged Care tells us why this would be a problem. It found, hardly surprisingly, that “[o]lder people report that continuity of care provided by the same workers enables better care and improves wellbeing” (p. 131). Its own conclusion was that, as workers are “increasingly experienced, older people will receive better care” (p. 41). The Royal Commission therefore recommended that “[a]ged care workers should have a clear vision for career progression” (p. 125). That goal is obviously not possible for temporary migrants. In a nutshell, the Royal Commission warned against reliance on a temporary aged care workforce, and thus, by implication, against reliance on a temporary migrant aged care workforce.

But could any aged and disability care workers (including PLS workers) get onto a pathway to permanency? This is extremely unlikely. Aged and disability care workers are classified as ANZSCO Skill Level 4 – commonly referred to as “semi-skilled” – and so sit outside our skilled migration program. This ‘closed door’ to permanency is underpinned by a gendered construction of skill, in what is a highly feminised profession.

There are a few, tiny parts of Australia that have what is called a Designated Area Migration Agreement (DAMA), and a few of these DAMAs cover aged care workers on an exceptional basis. However, these are largely untested, and it is unclear if the required annual minimum income threshold (TSMIT) of AUD53,900 will be met due to low pay in the sector, even with the 10% concession.

Ironically, the situation for Pacific meat workers is quite different. Though this work is also classified as semi-skilled, meat workers who can demonstrate their competencies are given a countrywide exemption and allowed to be a part of our skilled migration program. It should be quite easy for PLS meat workers to transition to the TSS (Temporary Skill Shortage) program and from there to permanent residency.

Aged care migrant workers should be given a similar deal. Other countries – like Canada and New Zealand – have opened new permanency pathways for caregivers; Australia should think about doing the same where there are genuine skills shortages.

Recruiting more trained and motivated aged care workers from the Pacific is a good thing. But this push needs to be viewed from the perspective of improving aged care quality, and consistent with the recommendations of the Aged Care Royal Commission. There should be a pathway to permanency for Pacific aged care workers who want to stay from the outset.