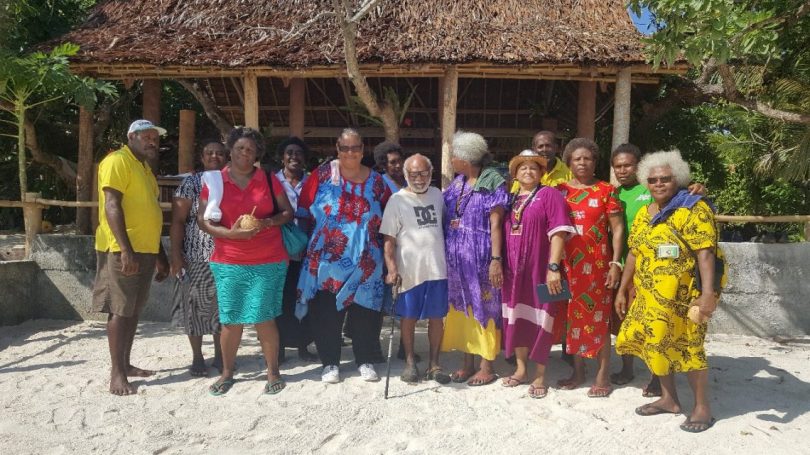 In the recent Vanuatu national elections, Dr Andrina Thomas stood for the rural electorate of Espiritu Santo. Here she offers some reflections to Elise Howard.

In the 2020 Vanuatu elections, 18 women campaigned and none of them got through again, just as in 2012 and 2016. I think the blockage is vote buying and candidates having no money for sponsorship and campaigning. We also need to work better at capturing votes. Support for women to run for elections needs to move out of workshops in lavish hotels in Port Vila and instead get down to the constituencies to encourage the grassroots to resist bribery and vote for women.

I want to say to the young women of Vanuatu, do not be discouraged! If we fail the first time we need to keep trying and believing in ourselves. The meaning of FAIL is First Attempt In Learning. Therefore, we can’t stop now just because there is still corruption and rampant vote buying in Vanuatu. Vanuatu defeated its fundamental principles of independence by selling passports, which is our identity, and selling land, which is our mother, because of money. It’s our civic duty to continue to preach good governance, and hopefully one day when we have more ethical people in power, better management, leadership, and governance will happen in Vanuatu.

In my small village of Matantas in Big Bay in the rural island of Espiritu Santo, the 150 people who were registered voters had to choose between 12 different political parties. For those voters to make their choice at the polling station, they are thinking of the people who paid them, who bought and gave them bags of rice, bags of kava, made promises for road contracts, and people who gave them money. It’s very difficult for someone like me to go in and say: “Look I’m not going to bribe you, but I’m going to come and tell you why I want you to vote for me because I have ethics and integrity. If I go into Parliament tomorrow, I will make sure I will not misuse your constituency development funds and I will report back to you how these funds were used”. But it’s difficult to compete with rampant bribery and corruption which is how men have always been voted into Vanuatu’s Parliament.

In Vanuatu our voters are handed a booklet of ballot cards when they go to vote. Their vote is supposed to be secret. When they go into a voting booth, the voter picks out the card for their candidate and puts this in the ballot box. For voters who aren’t literate, they are picking out a face from a photo on the card. In this election, political parties kept the voting cards – they were putting money in and returning the cards with money inside, a thousand vatu, and then getting people to vote for them. After the election the parties check whether any of their votes are missing. There was one incident when one husband went and beat up his partner with a stick and then asked her who she voted for, her response was that she couldn’t find the card for that person, so she took another one and put it in the envelope. The other problem is literacy. When people don’t know how to read, the only thing they can identify is pictures. In one instance on Malekula, a candidate only had his name on the card but no pictures. So, he was highly disadvantaged and now we have to ask, why did the picture not come out? This is something the Electoral Commission will have to look at.

The big political parties come with a lot of money and there’s no chance to compete against them. The smaller parties, who campaign transparently, are not going to dish out money. It is difficult to get the sponsorship that the older and bigger parties have because there are limited sponsors in Vanuatu.

Despite a lot of awareness around gender equality, when women are actually nominated, they are not nominated in their own right. Political parties will make a woman stand with another man; she is like a token. The parties say yes, we understand there should be gender equality but when it comes to vote casting, it’s usually the men that get the highest vote. So that’s why the women said look, we’ve tried. That’s the reason why the Vanuatu National Council of Women created the Leleon Vanua Democratic Party, a woman-led party on 15 May 2018. Access to funding is problematic which makes it hard to field contestants as our fundraising strategies were not sufficient compared to the bigger parties. We didn’t field any contestants in 2020, but we will do so in 2024. We want future leaders with good ethics and integrity standards.

The next strategy is undertaking advocacy work for my community by spending time educating people and answering their questions. I don’t just do good governance educational work, I also do financial literacy training. I’ll be helping the Mamas who are market vendors, and other Mamas with their small businesses, on how to save and manage their business properly and improve their small businesses to prosper. There are 3,000 market vendors. If all these women actually rallied behind me, I would have gotten elected, but the problem is they don’t know me personally. I need to come down to their level, get them to trust me, and maybe I will do better in 2024.

Support for women to run for elections – what do we need?

International donors have run many programs to support women to run for elections. The aid funding usually benefits the INGO groups. They run lots of meetings, always with the same people, in expensive hotels rather than reaching out to the grassroots. Internal assessments are done, but not a lot of work is done with communities externally to sensitise them and encourage them to vote for women. Gender equality means going down to the communities to convince both men and women to vote for women.

To find out more, read Elise Howard’s analysis of gender and the 2020 Vanuatu election in this In Brief published by the Department of Pacific Affairs at ANU as part of their In Brief series.

Dr Andrina KL Thomas is the second Ni-Vanuatu woman to obtain a doctorate, is a long-time women’s advocate, and was a candidate in the 2020 Vanuatu elections.

Elise Howard is a Senior Research Officer at the Department of Pacific Affairs at ANU.