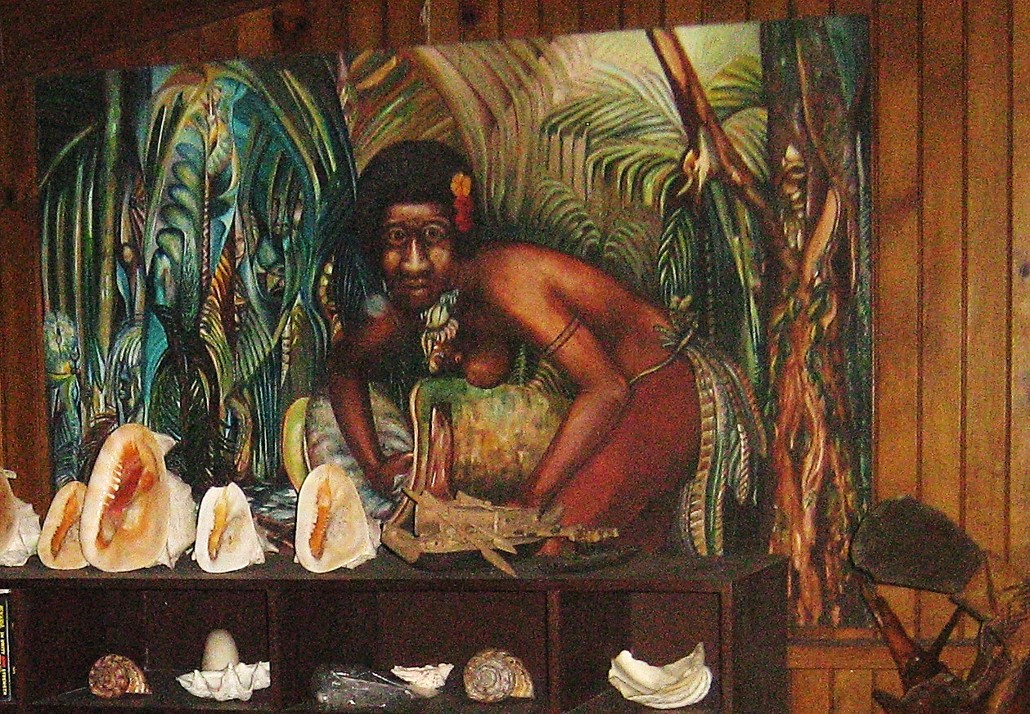 A painting by Manus artist Joe Nalo, on display at a guesthouse, depicting a Manus woman washing sago.

In the joint communique for the 25th Ministerial Forum between Australia and Papua New Guinea held in March 2017, Foreign Ministers Rimbink Pato and Julie Bishop welcomed collaboration as they prepare to close the Regional Processing Centre on Manus Island. However, Manus Island will continue to complicate the bilateral relationship between the two countries.

One outcome of the centre that does not appear to be on this ministerial agenda, but is of significant interest in the bilateral relationship, is the contradiction between the Manus Island Centre and the ministers’ commitments to address the rife problems of violence, security and gendered violence in PNG.

Many of us currently working in these spaces of development aid and gendered violence face a dilemma. On the one hand, it is difficult to talk about Manus Island because we are cognizant that it has complicated the bilateral relationship and because we need to sustain a meaningful dialogue with both governments as key actors supporting our efforts. On the other hand, it is almost impossible in PNG to shy away from confronting and trying to address violence.

That said, it is no longer possible for anyone remotely interested in development and gender empowerment in PNG to separate the issue of Manus Island from what some may consider a separate broader national security and violence program that the bilateral relationship can focus on. In the same way that PNG was once described as the barometer for Australia’s foreign policy success, it is probably fair to say now that successfully addressing the issue of security and violence on Manus Island can also now be regarded as a key indicator for Australia’s capacity to successfully respond to security and gendered violence more broadly.

For me, the issue runs deeper. Even though I have not lived on Manus Island for many years, and my work has been outside the island, it is my place of identity in PNG; ‘mi meri Manus’ – I am a Manus woman. Indeed, my childhood and life is defined by my Manus identity and experiences. My childhood livelihood was based on business on the Island. Like many Papua New Guineans, experiences of violence are infused in my life’s stories and relationships. It is difficult for me to disentangle my research which, inter alia, explores issues of violence in PNG communities, from my personal reflections on the current situation unfolding on Manus Island.

In 2014, I argued that the changes in the gendered demographic profile of the island brought about by the processing centre would lead to a ‘dynamic of power and hierarchy that depends on masculine domination, aggression, intimidation and inequality’. In the two years since, the media has continued to highlight the social issues arising from the interactions between the centre’s workers, detainees, and locals. These dynamics have become more complex with asylum seekers and refugees now allowed to move around freely on the island after the PNG Supreme Court ruled that the centre is unlawful. Serious mental health issues among detainees make this a serious public health issue. The more than 800 male asylum seekers have become increasingly embroiled in the social problems of the island. They are no longer just victims of violence with their own health concerns but are a significant body of local actors attracting the scrutiny of locals and the media.

The discourse around the centre engenders violence and has become multifarious – layered with nuances of perpetrators, victims and, political and business actors. In the beginning of 2017 alone, media reports (assuming they are accurate) reveal a disturbing trend towards normalising this cocktail of violence. In January, after two asylum seekers were beaten up by local police, the local member implicitly condoned this act of police brutality, saying that the asylum seekers ‘got what they deserved’. Police report a growing trend in family and sexual violence on the Island generally, and asylum seekers and refugees are also implicated in these problems. In two separate incidents in January and March, two asylum seekers were reportedly alleged to be involved in the rape of a young women and a girl. In February 2017, a local leader went to the extent of proposing that a brothel be built to serve the sexual needs of refugees. This raised concerns from local police who said that a brothel would undermine the social values of the community and would only exacerbate social problems that already beleaguered the community, which now includes asylum seekers and refugees. The prospects for tourism are greatly damaged. My family has been involved in the hospitality industry on Manus for over thirty years and conversations with family members indicate that while the centre has been good for business, it is increasingly difficult to monitor businesses, including the behaviour of clientele, to ensure a safe environment for vulnerable people.

Neither government – PNG or Australia – nor local political and business leaders, nor those of us working on gender based violence issues, can step away from a collective responsibility to address this issue openly. Nor can local political leaders and businesses shift the blame to the National or Australian governments. The situation has reached a point where responses based on blaming various parties are no longer viable. A more productive approach would be for frank discussions about what can be done to change the situation. Waiting for the final arrangements to close the centre is not enough given the recent ruling by the PNG Chief Justice that the centre is closed since its inhabitants are free to move around the island.

Urgent action is needed to reduce the concentration of men in the island’s small urban areas that host the centre. Relocating them to Port Moresby, where there are greater job prospects, would lower the processing costs, and defuse the social tension. The agreement with the US to take at least some of those found to be refugees is welcome, but the timeline is uncertain. Australia could revisit the offer by the New Zealand Government to take some of the refugees. Responding to calls for additional police is another obvious step. Political, community and business leaders in Manus can foster a dialogue based on non-violent solutions and protection of vulnerable people. Hotel owners and other businesses can conduct their businesses in a way that minimises risks to the community.

The Australian government has supported many important development projects in Manus since the centre opened but, according to its own publicity, few to protect women and children. PNG should also do more. Manus Province could be included in the Tourism Promotion Authority’s strategic plan as a priority province. A review of the business environment could be undertaken with a view to strengthening regulations and codes of conduct, and to deliver certified training for business operators in relation to the protection of vulnerable people. This includes raising awareness of laws that protect vulnerable people, especially children.

Silence is no longer an option. We need to acknowledge our collective responsibility to address the violence engendered on Manus Island. This has to be bipartisan and needs to encompass the totality of this impact – including, perhaps most importantly, the impact on the children of Manus Island. Both the Papua New Guinea and Australian governments, as well as local leaders, must show leadership on this issue and demonstrate concrete actions and outcomes. I hope that by disclosing more openly some of my own personal connections to these difficult issues on Manus Island, this article may help open up the space for these conversations to take place.

Michelle Rooney is a Research Fellow at the Development Policy Centre. The views expressed in this article are the author’s alone. She does not own any property nor have any business interests on Manus Island. For more discussion about “Engendering Violence in Papua New Guinea,” see here.