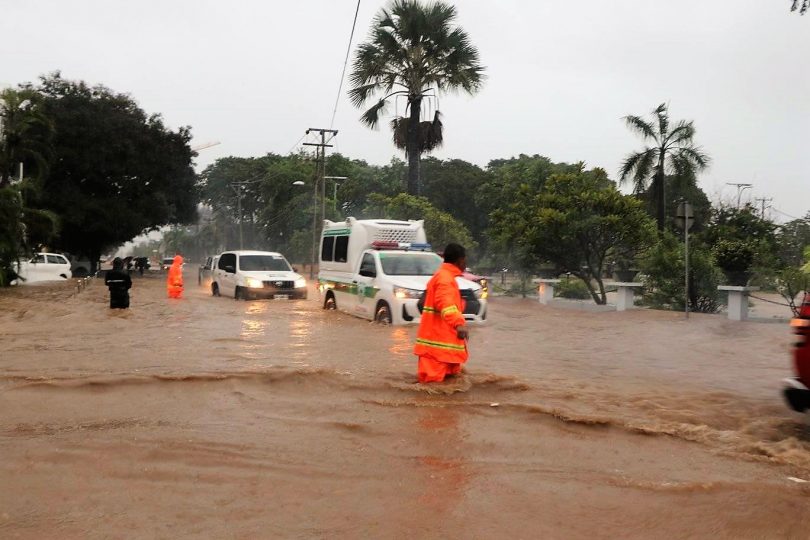 The Timorese government declared a State of Calamity on 8 April, and humanitarian agencies (such as UN agencies and international NGOs working in the country) launched an emergency response. They coordinated with the government’s recovery plan by covering immediate needs for food, non-food and sanitation items, and later supporting rehabilitation and reconstruction of houses and public infrastructure.

The crisis caused by the flooding also brought to light another type of emergency response, one that had not been documented in Timor-Leste before on this scale. As highlighted in a blog last year, the relief efforts exemplified a new level of coordination between local Timorese and the diaspora.

Because of this, Timor-Leste was selected by DEMAC – the Diaspora Emergency Action & Coordination initiative – as a focus country to document the diaspora emergency response in a real-time review. This review maps for the first time the diaspora humanitarian response to the flooding, and explores the potential for further coordination between the Timorese diaspora, the Timorese government and international humanitarian actors.

Although many have lived abroad for decades, the Timorese diaspora have historically remained very much engaged with the struggles of their homeland. During the anti-Indonesian resistance (1975 to 1999), they raised funds and provided a base for the Diplomatic Front (Frente Diplomatika), which was eventually vital in securing the tiny nation’s restoration of independence. More recently, money raised by a new wave of labour migrants in the UK, Australia and South Korea has become economically important. In 2018 it was reported that remittances from the Timorese diaspora were the country’s largest source of foreign revenue, after oil and aid.

The response of individuals, informal networks and organisations within the Timorese diaspora between March and May 2021, while not totally unprecedented, reflected increased digital communication and connection between the diaspora and young Timorese in Timor-Leste. As they received real-time updates via various social media channels and family networks, members of these groups around the world began to quickly mobilise in two ways.

One method was online fundraising campaigns to transfer money directly to recipient organisations – community groups such as the Women’s Group of Confedereção Frente Kaixa Clandestina Em Timor-Leste, the health clinics of Motael and Bairo Pite, and representatives of the Catholic Church in Timor-Leste – who could then purchase items directly for those in need.

The second method was donations of food, clothes, hygiene items and medication which were then shipped from the various countries. In the UK, a Timorese individual who runs a small shipping business offered to ship donations to Timor-Leste for free. Australian-based Lolo Liman ba Fuan Timor Labor Group raised up to USD40,000 in funds, and the Portuguese and Timorese Social Club shipped up to 3,000 kg of goods.

Although successful, the spontaneous and rapid humanitarian response met with challenges. For the majority of the diaspora organisations, the lack of any pre-existing relationship with the government bodies in charge of the emergency response, or the humanitarian agencies, made delivery of the donations difficult. The organisations therefore used family networks, social media or the Catholic Church to identify potential local partners, who then selected recipients for donations based on lists of displaced persons provided by local village leaders and evacuation centre coordinators. However, diaspora individuals who were interviewed expressed concerns about duplication of relief efforts or the potential for goods or funds to not be delivered to appropriate recipients.

There is no way of knowing when another natural disaster will hit Timor-Leste. What is certain is that it will occur again. There is a unique learning window now to gain knowledge from this experience and better prepare for the next one.

First, however, two important questions must be addressed. How can the coordination between diaspora organisations themselves be built upon and sustained in the future, thus ensuring a better use of resources for responding to those in need? And, how can any future coordination with the national government and humanitarian agencies be created in a fair and transparent way that includes and incorporates the diaspora’s voice?

DEMAC’s review shares recommendations compiled from interviews with members of the diaspora, government and humanitarian agencies, as well as the researchers themselves. Above all other recommendations, it is of paramount importance that diaspora organisations are not simply incorporated by existing, formalised humanitarian response mechanisms, but instead are engaged with in a way that recognises and utilises the diaspora’s unique strengths. Humanitarian agencies should invite interested diaspora organisations to future sector coordination meetings, and involve them in the recovery phase, needs assessments and reviews of the humanitarian response.

A specific recommendation from diaspora individuals was to create a forum of Timorese diaspora organisations, which could both improve intra-diaspora coordination and bolster their representation in future humanitarian responses.

While only the beginning of a long process, these recommendations can help ensure that diaspora organisations’ efforts and donations are received and distributed efficiently, effectively and fairly to those in need, as well as opening the door for better funding and capacity-building opportunities.

Read Diaspora organizations and their humanitarian response in Timor-Leste.

The Diaspora Emergency Action & Coordination initiative is currently hosted by the Danish Refugee Council and funded by USAID. For the real-time review on Timor-Leste, DEMAC worked with the research consultancy Owl RE and the Sharis Haburas Comunidade research teams in Timor-Leste.

Sarah Meléndez Emory works for the Danish Refugee Council and is currently a Project Officer with the Diaspora Emergency Action & Coordination initiative.