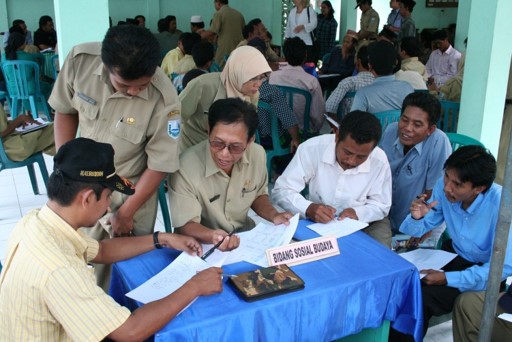 Programs to strengthen social accountability – citizens’ efforts to constrain the state’s use of power through various collective action tools and processes – must always consider context. It is critical that practitioners identify and account for unique on-the-ground variables that will influence interventions and their outcomes. Ignoring context leads to simply replicating and imposing “widgets” that have been effective in other settings, resulting in the indelicate and problematic imposition of uniform institutional blueprints.

But practitioners can move too far in the other direction, as well. Lately, exhortations to consider contextual factors that influence interventions to strengthen social accountability have grown louder, and their prescriptions increasingly complex.

Most recently, a World Bank publication entitled Opening the Black Box: Contextual Drivers of Social Accountability provides a “framework and … a set of drivers [that ] can be used iteratively to analyze contextual opportunities and constraints and to identify change paths that will allow accountability demands to advance … from the country level, to the sector level, and down to a specific frontline service delivery unit” (Grandvoinnet et al. 2015 [pdf]: 18-19). The publication is an impressive and thoughtful compilation of very thorough background research (such as Bukenya, Hickey, and King 2012 [pdf] and O’Meally 2013). However, the authors’ proposed framework (see Figure 1 below) is quite elaborate, with each of five elements – state action, civic mobilization, citizen-state interface, information, and citizen action – further broken down into four to six components, each of which has structural, actor-centered, or short- and long-term contributing factors. As a result, the information required for contextual analysis is extensive (see p. 131-145). 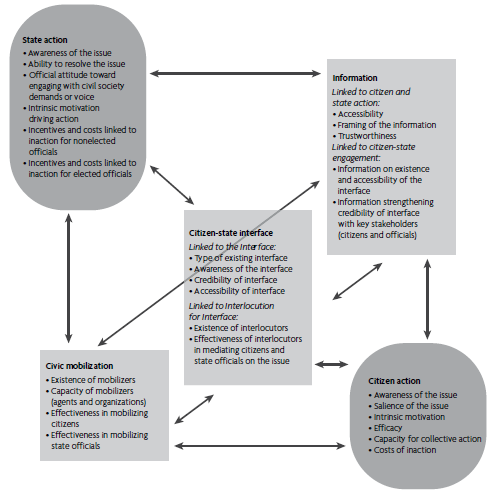 To be sure, such analysis has clear value to researchers. But for on-the-ground practitioners and implementers, the requirements are at times overwhelming and impractical.

First, contextual data are often costly to gather. Significant investments of time and resources are required to collect complete information on contextual indicators. In addition, information about some contextual variables, such as citizens’ and officials’ intrinsic motivations, is unlikely to be readily available, leaving holes in the framework and undermining its utility for an a priori understanding of the interventions’ viability.

Second, it is rarely possible to preemptively identify the factors that are most relevant to effective citizen voice and government response. Among the more striking findings in our recent research on social accountability in Indonesia (Wetterberg et al. 2015), presented at the 2015 Australasian Aid Conference, is that citizens successfully implemented program-supported social accountability tools in locations with both more and less conducive contextual characteristics (in terms of existing complaints mechanisms, prior provider-user relations, and past social accountability efforts). The same held true for health facilities’ responsiveness to service users. As intervention districts were chosen at random, contextual factors varied widely, as did their anticipated impact on social accountability. However, the data from our study indicated there was no clear pattern of contextual factors among sites with similar outcomes, at both facility and district levels.

We interpret this finding as attesting to the importance of micro-level drivers of social accountability (Joshi 2014). For instance, a recurring contextual factor in our past and ongoing research is the role of personal agency: individual state actors’ willingness to engage with citizens’ efforts proved to be important in launching, sustaining, and thwarting social accountability. Importantly, these actors were often at different levels (facility managers, technical officials, and elected leaders) and supportive or counter-productive at different points in the intervention cycle (during implementation, after positive effects were evident, or during replication). Such micro-contextual effects and variables cannot be systematically anticipated and incorporated into project designs.

These tendencies underscore the fact that social accountability interventions are often both complicated – multi-site and multi-level – and complex, meaning that causality may be recursive, effects disproportionate at critical times, and outcomes emergent (Rogers 2008). These characteristics suggest that, rather than undertaking massive data collection to document baseline contextual variables and track them over time, program initiators and practitioners should limit their attention to a small set of contextual variables directly associated with barriers to social accountability and service delivery improvements to identify interventions that may prove effective. Possibilities for information that may be gathered relatively easily include local resource distributions, degree of effective decentralization, level of civil society development, and past service performance. Additional factors may be added over time, as they emerge during implementation.

A gradual, iterative approach that adjusts interventions as effects of prior efforts become evident – such as Problem-Driven Iterative Adaptation – can, in fact, make social accountability strengthening more locally relevant.  Further, ensuring that project implementation is carried out by practitioners with thorough understandings of the local contexts can facilitate program adjustments, identification of emergent factors, and opportunities for strengthening social accountability as they emerge.

Following such an approach will help social accountability practitioners design and implement interventions that reflect consequential contextual elements, without subjecting themselves and their programs to the tyranny of context.

Anna Wetterberg is a Social Science Research Analyst at RTI International. This blog post is based on a paper presented [pdf] at the 2015 Australasian Aid Conference.