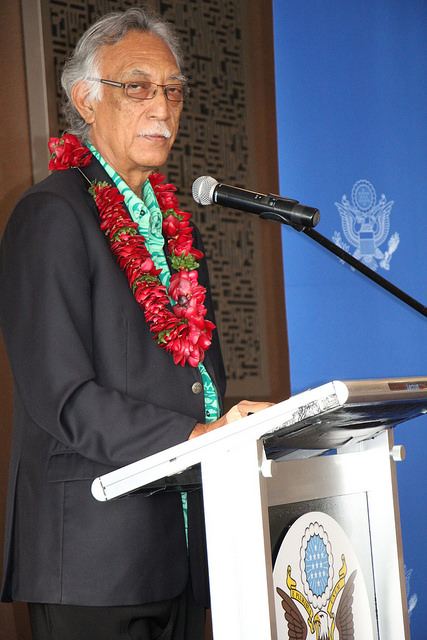 Tess reached out across the International Date Line to talk with the Premier of Niue, Toke Talagi. You can listen to a podcast of their conversation here or read a transcript of the interview here. But for the highlights of what they discussed, read on…

I started by asking Premier Talagi to introduce Niue and its people to those who (like me) may not know very much about his country, which is sometimes referred to as ‘The Rock of Polynesia’. He told me that the landmass of Niue is actually quite substantial at around 100 square miles, making it bigger than Cook Islands. Niue is a self-governing state in free association with New Zealand. In terms of the island’s economy, the Premier advised:

…our main industry at the moment is tourism. We’ve built up tourism over the last six years. We have arrangements with Air New Zealand for two flights a week. So the tourism industry is growing pretty rapidly, and I’m pleased about that because in the end it means we should be able to become self-sustaining in the long term. That’s what we’re banking on – our target if you wish – at the present time.

We then explored the opportunities and challenges associated with economic and social development in Niue a little further. One of the most significant challenges that the country has faced until recently is that of Niueans leaving to go to New Zealand (they are New Zealand citizens), with many of them then relocating to Australia. The Premier expressed the hope that as tourism was developed, there would be economic opportunities available that would attract some of these people back to Niue. And he pointed to some signs that this is already happening:

…our objective is to use tourism as a means for buoying the private sector, buoying the businesses, increasing shipping and air services so that people have confidence that when they come back here they’ve got a good opportunity to earn money. There are a lot more people now starting businesses here. I think about two to three years ago there were about 100. The number of registered businesses has gone up to about 250, and probably over, at the moment. So clearly economic activity, particularly in relation to the tourism sector, is growing.

Moving on to regional issues, I asked Premier Tolagi to tell me more about his apparent frustration with the role of the Smaller Island States (SIS) portfolio within the Pacific Islands Forum Secretariat (PIFS). And, more generally, what he sees as the role for regionalism in addressing the development needs of Niue.

The Premier said that he was yet to see that the SIS had delivered on its intended mandate in any pragmatic way in terms of ensuring that specific funding was targeted at addressing the needs of countries such as his. He confirmed that it was his intention that Niue would withdraw from the SIS. As for regionalism, he characterised this as an aspiration that was yet to be realised:

As far as regionalism is concerned, that’s a slightly different perspective. The Pacific Islands Forum, for example, and regionalism, are excellent concepts. But I think one of the things that we’ve got to be careful about is the fact that we’ve focused our attention so much on the concept rather than the practical application of what that actually means to the Pacific island countries, and to the people that we serve. At the present moment it appears to me that regionalism is a concept that many people talk about, but I’m not certain whether there is any practical implementation thinking in relation to what this regionalism can do, not just with small island states like Niue, but also some of the bigger island states that are part of the Forum.

I also asked the Premier to expand on recent comments of his regarding the need for existing partnerships to deliver more to Pacific island countries in terms of assistance to deal with the effects of climate change. The Premier confirmed that he was happy with the partnerships that Niue has with other countries and groupings, such as the European Union, but he feels that there has been little real movement, despite much talking:

There are too many meetings, to be honest. There are just too many meetings. And although we’re small, we can send people to these meetings. But if I were to attend every meeting that I was invited to, I’d spend no time at home at all. It’s not worth the time. So we’re being very selective for the moment about the meetings that we attend.

Finally, I asked the Premier what he thought his country of Niue had to offer the region and the wider world. He told me that he considered Niue to be something of a microcosm and that the people of Niue have much to contribute to wider conversations, provided regional and international stakeholders are able and willing to listen. In addition:

Toke Talagi is the Premier of Niue. Tess Newton Cain (@CainTess) is a Research Associate at the Development Policy Centre.

Toke Talagi is the Premier of Niue.