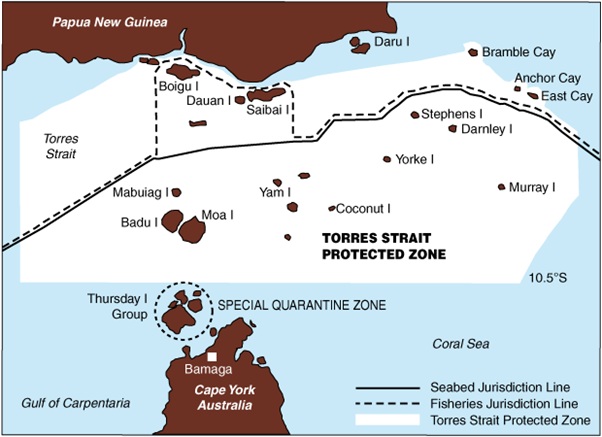 The news last week of an extremely drug resistant case of tuberculosis in Cairns (XDR-TB) has once more put a spotlight on the issue of TB control in the Torres Strait region.

Papua New Guinea is our closest neighbour. This is nowhere more apparent than in the Torres Strait region, which stretches across the north-east of Australia and the south-west of PNG. From Sabai Island (the northern-most of Australia’s Torres Strait Islands) it is possible to see the cooking fires of PNG villages. Unfortunately, the Papuans of these border villages have starkly disparate lives to Australians living in the Torres Strait. This is despite the fact that the family, cultural and social connections between them is recognised in the Torres Straits Treaty, which allows free movement across the border for residents of the region, and under which border crossings are frequently made.

TB and multi-drug resistant TB (MDR-TB) are both widespread in PNG. The latest available data (from 2009) showed that 11 of the 31 cases (35%) of MDR-TB detected in Australia at the time were patients from PNG receiving treatment in Australian clinics in the Torres Strait region. The risk of of XDR-TB spreading within PNG and into Australia is high. A WHO TB expert review team gave this bleak assessment for the South Fly region of PNG’s Western Province (the part of PNG closest to Australia) in November 2011:

When treatment is delivered under the current conditions which many patients are having, then it’s a matter of months or years before we have forms of TB that cannot be cured.

AusAID has since committed to fund an $8 million program over the next four years to strengthen TB control in the region. This includes an isolation ward and capacity for MDR-TB diagnosis and treatment in Daru (the only major town in the South Fly), support to World Vision to train and supervise treatment and support workers in the South Fly, support to Western Province Department of Health to conduct regular outreach clinics by speed boat to these same areas, and provision for one year of MDR-TB second line drugs.

These measures are promising, but will they be enough? Following our participation in a Devpolicy public forum on this issue in May 2012 at the ANU’s Crawford School, we have written a report suggesting that it will not. We maintain that there is a real risk that the new AusAID TB program will:

go the way of much other development assistance in the region. But this time, instead of clinics that are falling into disrepair in the space of a year, the net outcome of these programs will be the rapid emergence and spread of XDR-TB.

Political attention in Australia has focused on the condition of the Daru Hospital, but this misses the real issue. Daru is at least two hours by boat for most PNG villagers who live in the Treaty region, and the cost to travel there and back is equivalent to more than one month’s average income. Conversely, Saibai Health Centre, in the Australia territory of the Torres Strait, is 15 minutes by boat from the South Fly coast, and this trip can be made at a fraction of the cost. Moreover, since most PNG residents of the area travel regularly to Saibai for trading purposes, access to Saibai health services is, in effect, costless.

Providing TB treatment through Australian health centres sounds promising, but is not without its risks. Experience has shown that patients may not attend for the duration of their course of treatment, thus leading to the spread of drug resistance.

Having health workers based in South Fly villages will help, as will the access provided by a speed boat to bring a doctor. But it is important to understand the complexity of the challenge. MDR-TB is a devastating illness, requiring two years of toxic, complex, costly and often less effective chemotherapy with second line TB drugs. It is not realistic to expect MDR-TB patients to stay in Daru for two years. Nor will the combination of health workers and doctor visits by speed boat be enough to manage MDR-TB. The only viable long term solution is the establishment of fixed clinics in the South Fly.

Even this will not be enough. Australia’s health system is one of the best resourced in the world, while PNG’s is one of the poorest and most challenged, particularly in rural areas such as South Fly. The starkly different levels of access to health care for populations living within a few kilometres of each other, and who have daily and ongoing social, economic and cultural exchange, will continue to lead to cross-border health care seeking by PNG nationals. The appropriate role of Australian health centres needs to be carefully considered to prevent the problem of incomplete treatment arising again. We can be sure that only an integrated solution involving the health care systems on both sides of the border will work.

Nor can we afford to focus on the South Fly alone. PNG has one of the most serious TB and MDR-TB epidemics in the world.

A multi-pronged response is needed, based on community consultation, the involvement of appropriate expertise, and independent monitoring and evaluation. We have made seven recommendations:

Many of these recommendations are challenging, but that is precisely the point. No one should assume that the problem of TB, MDR-TB and now XDR-TB transmission from PNG to Australia is easily solved. At least a start has been made, and the issue has a high political profile. But much remains to be done. One thing is for sure: we are in this together and for the long haul, and it will certainly need much more from Australia than $8 million and a four year commitment.