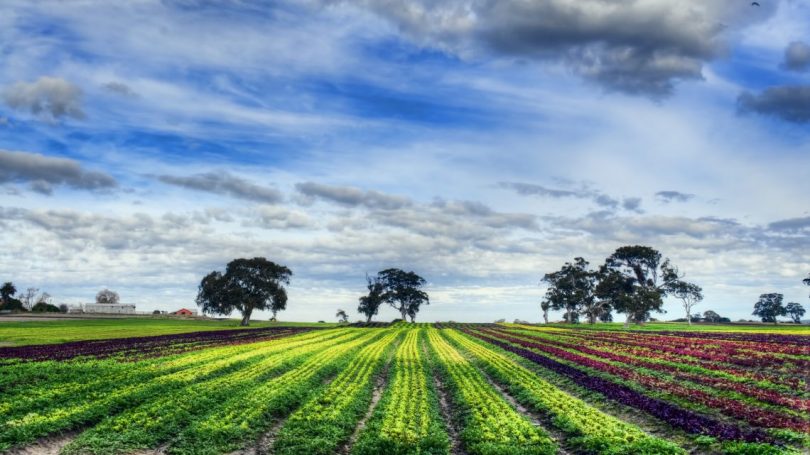 Two recent surveys (which we will refer to as ABARES and Howe-Wright) of vegetable farmers have asked about their labour requirements and recruitment difficulties and came up with very different results. These results have important implications for the case put by the National Farmers’ Federation (NFF) for a dedicated agricultural visa. According to the NFF, the ABARES survey “doesn’t match farmers’ lived experience and fails to provide appropriate or current evidence that will help fix the much talked about problem of labour shortages.” The NFF prefers the Howe-Wright survey.

The Australian Bureau of Agricultural and Resource Economics and Sciences (ABARES) has just released a report on the demand for farm labour based on surveys of several agricultural subsectors. The focus of this blog is on the ABARES 2018 national survey of 300 vegetable farms about their labour use in the 2016–17 financial year.

The ABARES survey found that of those vegetable farms that attempted to recruit workers in 2016-17, 18 per cent said that they had some or a lot of difficulty recruiting. Virtually all vegetable farms filled over 99 per cent of their job vacancies for the same period (p. 24). This is consistent with previous years’ ABARES surveys wherein vegetable and fruit growers have consistently reported few recruitment difficulties (p. 25).

Two earlier surveys in 2011 and 2014 by ANU researchers (the latter in conjunction with the World Bank) found similar results. In answer to the question ‘Did you have difficulty finding sufficient seasonal workers over the last 12 months?’, only nine per cent in 2011 and 18 per cent in 2014 responded in the affirmative.

By contrast, in August-September 2016, a survey by researchers Joanna Howe and Chris Wright found about two-thirds of growers reported having difficulty getting pickers, packers or graders (22 per cent ‘always or most of the time’ and 41 per cent ‘sometimes’). Their survey also found that vegetable farms employing 5-19 people are the most likely to do so (pp. 6 & 52). Howe and Wright also report that 40 per cent of the vegetable farmers surveyed agreed that on occasions in the last five years they could not get as many workers as they needed. A quarter of all growers not able to find workers said they had left the vegetables unpicked (pp. 6 & 52).

How could these surveys deliver such different results?

The sample for the Howe-Wright survey, however, was drawn from the contact lists supplied by state agricultural associations representing vegetable growers, notably NSW Farmers, AUSVEG VIC, Growcom (QLD), AUSVEG SA and vegetablesWA. The sample drawn from this population may be different to one based on the ABR. Respondents were informed who commissioned it (p. 68). This may have introduced a bias, alerting respondents to how the survey results could be used.

Another difference between the surveys is the framing of the questions. The Howe-Wright questionnaire is public; the ABARES one is not, but we have been able to find out some information about it. The ABARES survey question on difficulty recruiting followed detailed questions on which occupations farms attempt to recruit for, how many, and why, all for 2016-17. There is then a general question: ‘To what extent did you have difficulty recruiting staff?’ Possible responses were: ‘a lot of difficulty’, ‘some difficulty’ and ‘no difficulty.’

The Howe-Wright survey question was different: ‘In general, how often do you find it difficult to get pickers, packers or graders?’. The three possible responses were ‘always or most of the time’, ‘sometimes’ or ‘never’ (p. 52). It is not altogether clear what impact these different questions would have, but there are reasons to believe that the Howe-Wright question is more likely to generate responses indicating a shortage. If a response is negative, the farmer might think ‘not often’ and then choose ‘sometimes’ rather than ‘never’. By contrast, for the ABARES question, a negative response clearly translates into ‘no extent’ and then ‘no difficulty’. Put differently, one might answer that one has ‘no difficulty’ recruiting staff, but not that one ‘never has difficulty’. Finally, this Howe-Wright survey question lacks a timeframe, whereas the ABARES one is in relation to a single year.

The question about recruitment difficulties over the last five years asked by Howe and Wright is, ‘In the last five years, have there been any occasions where you were not able to get as many pickers, packers or graders as you needed?’. One might answer yes to this, but no to the ABARES/ANU question about whether one had difficulty recruiting staff.

In summary, three differences between the two surveys stand out: different sampling frames; the potential effect on the respondent of who commissioned the survey; and the different framing of the questions. The relative importance of these is impossible to say. The association of the Howe-Wright survey with industrial associations, and the consistency of the ABARES response over time and with the ANU surveys should all lead us to give the ABARES survey more weight.

Another and perhaps the most compelling reason for giving the ABARES survey results more weight is that its findings are comparable with other sectors. It is hardly surprising that any group of employers should have some difficulties recruiting workers. The question of policy interest is whether that group faces more or less recruitment difficulties than others. As the graph below shows, the ABARES report finds that vegetable and irrigated fruit and nut growers actually have far fewer recruitment difficulties than the Australian employers economy-wide. (The economy-wide results come from the Department of Employment and summarise the response to a similar question to the ABARES one.)

Proportion of farms and firms with recruitment difficulties 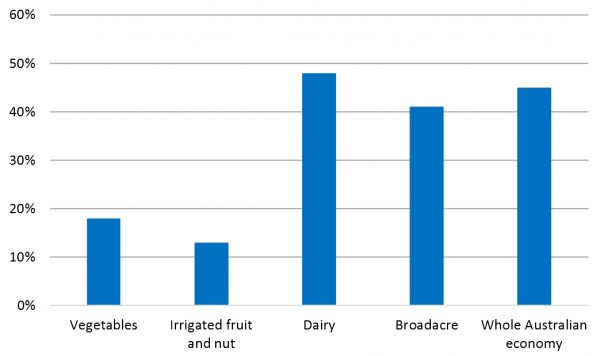 It is not surprising that farmer organisations prefer the Howe-Wright results over the ABARES one. However, for all the reasons given above, policy makers should give more weight to the ABARES one.

Note: The graph above is a simplified version of one (Figure S4) in the relevant ABARES report. The economy wide results summarise the responses to the following Department of Employment survey questions: ‘What occupation did you most recently recruit for? Overall, would you say it was difficult to fill this vacancy?’ [Yes, no or unsure].