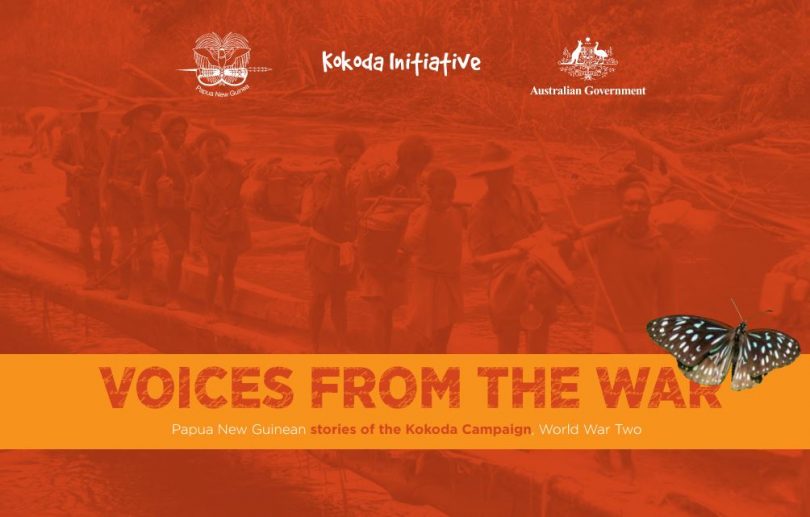 World War Two (WWII) passed through our land, along the rugged, inhospitable terrains of the now iconic Kokoda Track, and the tales we read and heard were all about foreign armies who came, fought the war to leave a legend.

70 years on and little to nothing was heard of our own heroes and heroines who played important roles during the war. Even eyewitness accounts of the hostilities brought by the war are much welcome tales to decorate our heroes and heroines.

It is now a thing of the past given this publication entitled ‘Voices From The War – Papua New Guinean stories of the Kokoda Campaign, World War Two’ (2015). Indeed, the publication not only gives a permanent imprint on the fast-fading local war tales but it sets the stage for many more accounts of the war, told by our own, that was experienced right across this majestic land.

In an attempt to record and preserve the rich oral history of the Kokoda Campaign a group of Papua New Guinean and Australian researchers collectively put together this account of 80-plus interviews carried out.

This 53-page document printed on 140gsm photo glossy on a tanned cover is metaphoric. The ‘red-room’ atmosphere of negative film coming out of washing emits the language of ‘there is more to come’.

Gaining political will by being co-sponsored by the PNG Government, through the Department of Environment, Conservation & Climate Change, and Australia’s Department of the Environment shows how important this publication is. It reaffirms the ongoing governmental support in protecting the Kokoda Track, Brown River Catchment and Owen Stanley Ranges while improving the lives of the people living along the track.

Expounding on the political will, Dr Andrew Moutu, then Director of the National Museum & Art Gallery, in his foreword message reveals that this Oral History Project was originally conceived as a vital element in the management of the Kokoda Track.

Dr Moutu elaborates that this first of its kind publication received and captures to preserve before all is lost to history and to memory. To date, people who are not from Papua New Guinea, notably Australians, Americans, and Japanese, have dominated these stories (p. v):

Those stories of many Papua New Guineans who were involved in the war along the track have become marginalised, muted, suppressed or repressed and are often not brought into mainstream history or public light. It was as if the war is not theirs and they are incidental actors.

Dr Moutu is all applause to the Australian Government for providing funding and professional expertise. He sets the hope of this initiative by encouraging students, war history enthusiasts and researchers, and readers in general alike to learn about our history. It is in learning this oral history that we can improve historical introspection within ourselves to reinforce the true value of telling such stories.

The voices reverberating from the 11 topics constituting this timely publication is complemented with monumental sepia photographs bringing to life the memories of those three years of cruel war experiences.

Seven decades gone and the stories are evolving into legends: told and retold. Fair enough, some are accounts of first-person witnesses and those who actually took part in the war. Others were kids at that time and we praise them for keeping these memories for the goodness of humankind.

Such is Hawala Laula, a witness of the war from Kagi village, as a participant in the interview who reaffirms (p. vi),

These are accounts of the stories being retold as in this interview with Dixie Woiwa, from Hanau village (p. 17):

…And the bodies were so many, I am unable to count. At the time my grandfather was telling the story and the vivid descriptions of the dead soldiers, I cried when my father told me the story. I was deeply moved by the way my grandfather told stories of his eyewitness accounts during the war.

The war was not only for the menfolk. Women also played a part. Lomas Tonu Ani, from Hanau village (p.13) tells why his mother was taken away:

…my mother is Ruth Ani. She was recruited and taken to No.3 camp where she did laundry with other girls. There were 40,000 pieces washed each week…from seven hospitals in the Dobuduru, Oro Bay, Base B area. She was working at No.3 camp which is located near Girua airstrip until the war came to an end.

The 10 accounts presented in the book are heartening. Reading them brings alive the receding voices once shared over dying embers not just ordinary everyday stories, but stories rich in flavours of an event that has changed the courses of nations.

We now have a task at hand to replicate this Initiative to capture similar voices from other parts of Papua New Guinea who also experienced WWII. There is this great calling to bring out these voices before they become ghostly mists on a dead man’s chest. Of course, funding such initiative are our greater challenges; however, opening our purses to where our mouth is serves justice to where our heart is – home.

Timothy Pirinduo is a freelance writer based in Papua New Guinea.

Timothy is a self-taught writer who writes as a hobby. He started taking the hobby seriously in 2009 when he started writing weekender feature stories and commentaries for the local newspapers.

He plans to take up full-time writing upon retrenchment from formal employment to complete a number of pending book and publication projects.

Timothy is a graduate in Industrial/Organisational Psychology, University of Papua New Guinea, with emphasis in Human Resource Management and Philosophy.