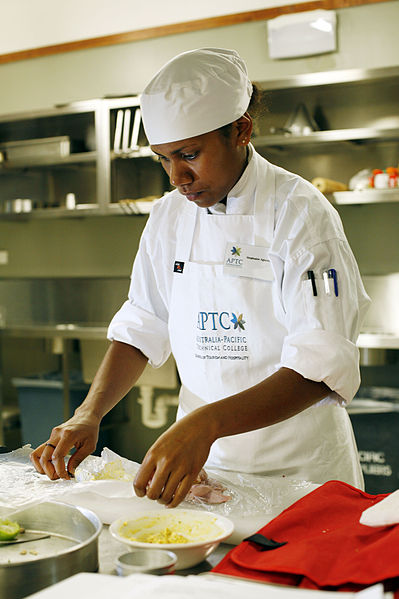 Since the release of our report (by the brilliant Michael Clemens, the up-and-coming Colum Graham, and me) on the Australia Pacific Technical College (APTC) and its failure to promote labour mobility (as it was originally, and is still, intended to do), a few people have asked me what should happen to the APTC. Since our report was not a comprehensive evaluation, I’m not really in a position to answer. But I do have a couple of thoughts.

First, we should know a lot more fairly soon, with an APTC evaluation currently underway. The last evaluation was in 2009 (a mid-term review), and there was also some analysis in the 2010 Stage II (2011-2015) design. The latter contained what it described as a “comprehensive” but “indicative” cost-benefit analysis (CBA). This found that the APTC only obtained an acceptable internal rate of return if a significant number (about 25 per cent) of its graduates found overseas employment. As the design document commented, this result “underlines the importance of the APTC rationale to provide training which facilitates labour mobility.” Of course, our study showed that only a few percent of APTC graduates found overseas employment, implying that, if the 2010 CBA had it right, ATPC’s  internal rate of return would be below the threshold of economic viability. The evaluation now underway should have access to a lot more data. I hope the team re-runs the numbers, and calculates a new rate of return.

Second, fiddling around the edges of the APTC model is, to my mind, a temptation best avoided. Our report argued that one reason why APTC graduates are not migrating is that migrating, at least to Australia, requires a lot more than Australian certification. You still need a skills assessment and you’ll still find it much easier if you can get an employer to sponsor you. An obvious way to promote mobility outcomes for the APTC would be to promote links between Australian employers and APTC graduates and/or to subsidise skill-testing requirements. At least in my view, however, implementing reforms like this would be a mistake if everything was left unchanged.

Such a response would ignore the more fundamental problem that the APTC does nothing to augment the supply of skilled labour within the Pacific. It takes workers who are already skilled, and makes them more skilled. Making it easier for these workers to migrate would hurt Pacific businesses. For example, the owner of the Vanuatu refrigeration company, who has written for our blog about how happy he is with the training his workers have received from the APTC, would be at real risk of losing those workers to higher-paying Australian jobs.

Understanding that the APTC operates in a self-described “post-graduate” or “top-up” mode is central to understanding its limitations as a labour mobility mechanism. Whether it was a good idea to set up the APTC in this way can be debated. Obviously, it is cheaper to train someone to a certain skill level if they are already part way there. But establishing the APTC in this way directly, and perhaps fatally, undermined its goal to promote labour mobility as, if it did achieve that goal, it would then be open to the charge that it would be contributing to Pacific brain drain.

Hence the question: whither APTC? In my view, either drop the goal of labour mobility, or fundamentally reorient the institution’s mission and mode of operation.

What makes this a particularly interesting question at the current time is the Tonga aged-care pilot that the APTC announced a few months ago. This seems to be quite a departure from earlier APTC initiatives in several ways.

First, as we mention in our report, the original APTC proposal contained an initiative to train nurses, but this was dropped due to political pressure from Australian unions. Since then, there has been nothing from the APTC in the medical or broader care-giving space.

Second, there is a heavy emphasis in the announcement of this pilot of the international mobility objective. The APTC announcement talks of the huge skill shortages in aged care in Australia. It says of the pilot program that it is “an example of a targeted approach to supporting labour mobility of Pacific islanders who graduate from ATPC.” This language is in contrast to the rest of the APTC website, which mentions the labour mobility objective but gives it no prominence whatsoever.

Fourth, this is an initiative which, if it did achieve its mobility objective, would not lead to brain drain. There is no aged care industry in Tonga. Perhaps that is why the Health CEO is positive about it: he won’t be losing his few doctors and nurses (or skilled tradespersons) as a result.

We shouldn’t get too carried away. It is a small pilot with just 20 participants. And it is not clear what their migration pathway would be.  Aged-care does not seem to me to be on Australia’s migration skill list: aged-care nurses are, but not aged-care workers in general. If so, there would have to be migration reform for the Tonga pilot to achieve its objective. That is something that has never been seen as part of the APTC, which has been viewed since its establishment as an aid training initiative, not a whole-of-government labor mobility one.

But hats off to the APTC for this pilot. I hope it generates pressure for change. I hope it works, and that the APTC is at last able to start achieving mobility for Pacific islanders without depleting skills for the Pacific islands.