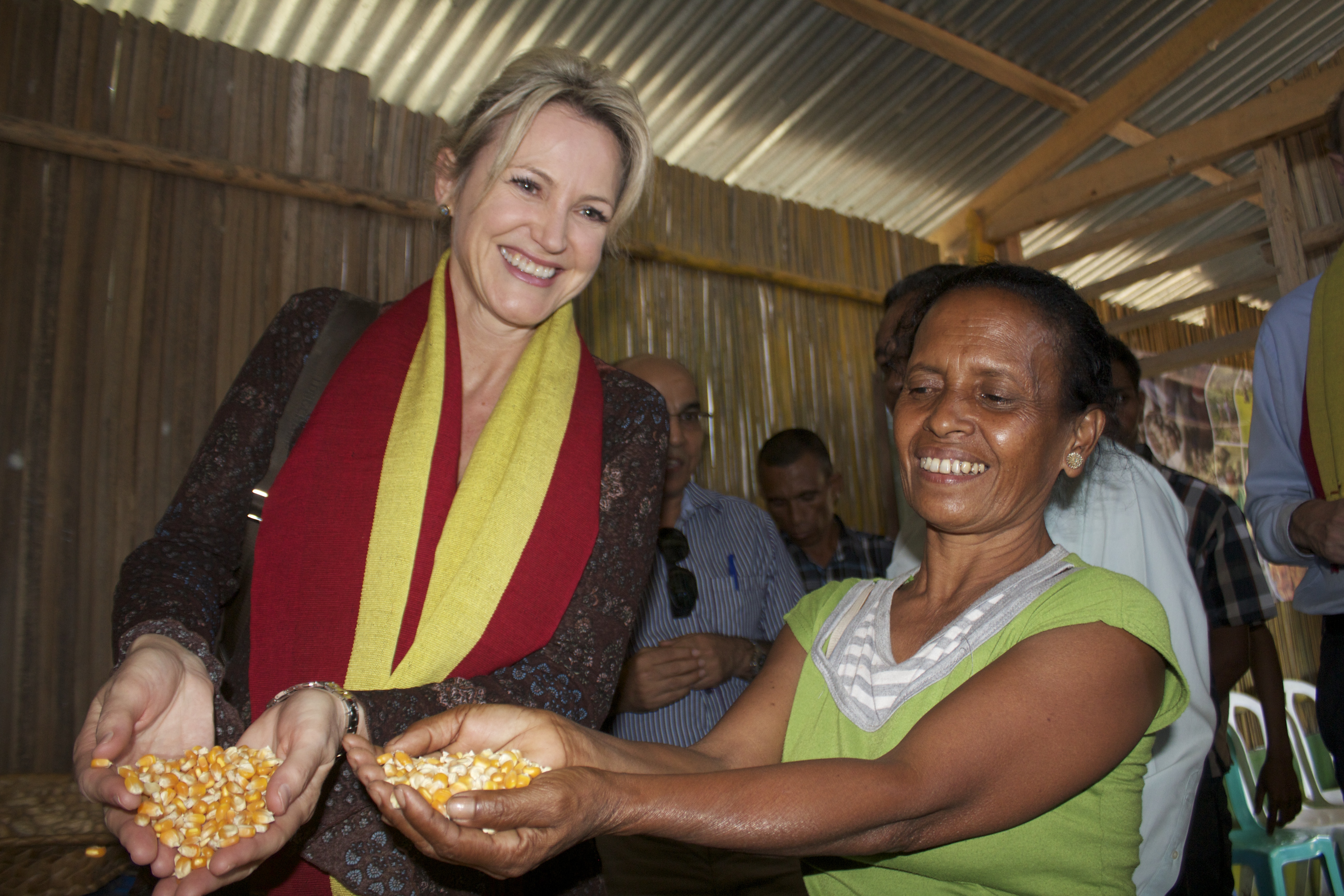 The great Labor Prime Minister Ben Chifley said, “We have a great objective – the light on the hill – which we aim to reach by working for the betterment of mankind not only here but anywhere we may give a helping hand.”

Our aid program is part of a long Labor tradition of internationalism that has produced results of which all Australians can be proud.

Under this Labor Government, Australia’s contribution to international development has grown every year, increasing by 80% since 2007, and reaching 0.37% of GNI in 2013/14. It will grow a further 60% to reach 0.5% of GNI by 2017/18. Matching that growth has been the careful and thorough reform of our assistance program and of AusAID itself.

In May 2013, the independent OECD peer review of Australia’s aid program praised the efficiency, transparency and effectiveness of Australia’s aid program. In particular, it recommended that other countries could learn from Australia in the areas of disability-inclusive development, providing aid to fragile states and organisational reform. In the same month the Treasurer’s Budget included a 10% increase for our aid program, to $5.7 billion, at a time when other OECD countries decreased their aid by 4% on average.

It was this Labor Government that put in place for the first time a clear strategic framework for the aid program, the overarching purpose of which is to help people overcome poverty through saving lives, promoting opportunity for all, sustainable economic development, effective governance, and humanitarian and disaster response. These goals all matter; they recognise the complexity of poverty and the range of interventions needed to address it. Economic growth and increased private sector investment alone are not sufficient to lift people out of poverty. We must also focus on the drivers of economic growth, and on the barriers that stop people sharing in economic benefits, such as poor health, low education, inadequate infrastructure, weak governance, and gender inequality.

As Australia’s first Minister for International Development in 20 years, I have seen first-hand the   life-changing assistance we provide. In Timor-Leste, which shares the unfortunate distinction with Burundi of having the worst child malnutrition rates in the world, AusAID and ACIAR have worked with the government of Timor-Leste to provide 33,500 Timorese farmers with higher yielding seed varieties, already enabling them to grow more and better quality food, and to sell some of the seeds.

While visiting Solomon Islands for the tenth anniversary of RAMSI, I announced funding for 8,000 sight-restoring operations to be performed in the Pacific over the next three years through organisations like the Pacific Eye Institute and the Fred Hollows Foundation.

Last year the Australian aid program vaccinated more than 2.7 million children, enrolled one million additional children in school, constructed or maintained more than 4400 kilometres of road, provided access to safe water for an additional 2.2 million people, and assisted more than 300,000 additional births to be attended by a skilled birth attendant, in addition to providing life-saving assistance to 11.8 million people in conflict or crisis situations.

Under this Labor Government, AusAID has entered into partnerships with Australian NGOs that have been working to alleviate poverty for decades and have developed close relationships with local communities in the countries where they operate. Grassroots movements such as the Make Poverty History campaign demonstrate the strong support of the Australian community for Australia’s aid program.

Under Labor, Australia has broken new ground in recognising aid programs are most effective when people with disability are included. Australia’s Ambassador for Disability-Inclusive Development – the first in the world – will play a key role in advocating for increased resources and attention to disability-inclusive development.

We have also recognised gender inequality is a key obstacle to overcoming poverty. We have a ten-year plan to work together with women in the region to catalyse the generational change needed to boost women’s equality and rights in the Pacific.

Under Labor’s aid program, 86% of country-specific aid in 2013–14 is targeted to the Asia-Pacific, because we should rightly be paying most attention to partnerships in our own region.

The remainder of aid is provided to countries in Africa, the Middle East, and Latin America and the Caribbean because some of the poorest people in the world live in these regions.

The humanitarian crisis unfolding in Syria and neighbouring countries is an example of why we need to look beyond our own region. Our humanitarian assistance to the victims of this horrific war has now reached more than $100 million. As an active and leading participant in global fora such as the UN Security Council and the G-20, it is essential that we play our part in upholding human rights and addressing global challenges such as food security and climate change, which will have a devastating impact on our small island neighbours, among others.

The contrast between Labor and the Coalition when it comes to foreign aid is clear: it is clear in the numbers, in the language, in the values, and most importantly in the outcomes.

Under the Howard government aid funding was low and unpredictable, averaging 0.25% of GNI; the provision of aid was less well targeted in terms of addressing the sharpest needs; and there was no appetite for reform.

The Coalition has indicated that its approach to aid would consist of ‘aid for trade’ and promoting private investment and economic growth. But there is no detail to explain how these policies would benefit the poor, as opposed to an elite few, in the absence of a targeted focus on education, health, water and sanitation, gender equality, infrastructure and governance. It’s no use developing the private sector if there are no workers to take on the jobs because they are hungry, sick or not sufficiently educated.

Labor supports appropriate private sector development, as seen in the business engagement strategy released by Foreign Minister Bob Carr last year.  Our Mining for Development aid initiative is helping to leverage sustainable development outcomes from resource extraction in many African countries. There are genuine synergies between Australia and many countries of Africa when it comes to mining and agriculture, and it is appropriate that Australian expertise and skills be targeted to areas where we can make a real difference, for instance in agricultural research, dry-land farming, trans-boundary water management and mining governance, as well as in areas where the MDGs are lagging such as in water and sanitation, and maternal and child health.

Assisting the development of a continent of nearly one billion people is not only the right thing to do but it is clearly in our own economic, strategic, security and national interest. However, the Coalition has said it would withdraw aid from a number of regions including much of Africa, and it has not indicated whether it supports Australian membership of the African Development Bank (AfDB), a measure recommended by the Independent Review of Aid Effectiveness and accepted by the Labor government. A dissenting report from Coalition members of the Senate Foreign Affairs Committee last month has suggested it does not support our joining the AfDB.

The Coalition has also talked up its proposed new Colombo Plan while overlooking the incredible success of the Australia Awards program that has increased the annual intake of scholars almost tenfold. Each year around 5,000 people from more than 145 countries receive Australia Awards, as compared with the Colombo Plan which averaged 570 per year. The Australia Awards program includes scholarships for Australians to gain international study and research experience (NB: part of this program is appropriately not classified as aid) and 12,000 Asia-specific scholarships over the next five years.

I agree with the Shadow spokesperson for Foreign Affairs Julie Bishop that there is a real choice in this election when it comes to foreign aid.

Labor has significantly raised the aid budget and carefully reformed our aid program. AusAID is the most transparent agency in the Commonwealth government. We have been clear in our commitment to lift our provision of aid further, and we have created the first dedicated Minister for International Development in 20 years. Under Labor the aid program is contributing to steady progress on the MDGs and we are active participants in the global post-2015 development agenda.

Labor believes helping people and nations escape from suffering and deprivation is core to our national ethos, and creating safety, peace, wellbeing and self-sufficiency, especially in our region, is central to the Australian project.

Melissa Parke MP is the Minister for International Development and the Federal Member for Fremantle.

We have also extended invitations to the Coalition and the Greens to write for our blog. For our analysis of the parties’ policies on aid and development, go here.

Melissa Parke MP is the Federal Member for Fremantle.