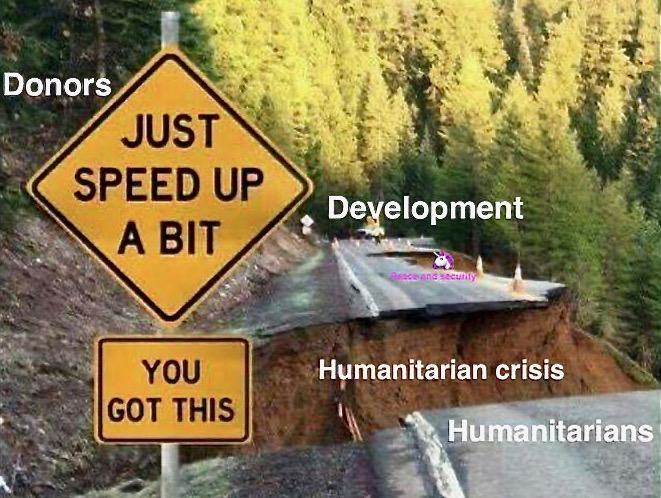 Sometimes aid policy feels very circular. The renewed interest in the humanitarian-development nexus is one such example. It has been on and off the policy agenda since the 1990s, but is now back in full swing, often with peacebuilding added to form a triple nexus. However, this time it feels markedly different, with work on the nexus finding traction in operational settings alongside aid policy departments. There are serious attempts by those in charge of large aid budgets to bridge the humanitarian-development-peace (HDP) divide in programming, including the Department for International Development (DFID), European Union and the World Bank. It is therefore an opportune time for the Australian Government to consider how this emerging thinking and practice can help shape its international development policy review.

The re-emergence of nexus thinking

A key driver of the renewed focus on nexus approaches is the recognition that the humanitarian system is stretched beyond capacity. The figures are daunting. It is estimated that 168 million people will require some form of humanitarian assistance in 2020. Seventy million people are displaced due to crises, up from 60 million just a few years ago. Crises are becoming more protracted, with the average length of a humanitarian appeal now at seven years. And even though more humanitarian funding is being provided globally, the gap between resources and need is growing. The humanitarian system was not designed for such large and prolonged need, leading to a range of global commitments to change current systems to better reduce vulnerability and address humanitarian risk – see here and here. The increased focus on the nexus also reflects recognition that development, conflict, fragility, and humanitarian assistance are interlinked and should be addressed in a more coherent way.

Emerging shifts within the aid system

Previous attempts at nexus approaches have typically been challenged by traditional aid architecture, which is structured in silos, with different financing streams, donor systems, and interests. More recently though, we are seeing some structural shifts in support of nexus approaches. The UN has established, with support from the Word Bank, the “New Way of Working” (NWoW), designed to operationalise the work of humanitarian, development and peace actors towards collective outcomes at the country level. NWoW pilots have been rolled out in a number or countries, and a major independent review has identified early positive changes.

Flexible donor financing and behaviour is proving to be critical to supporting nexus approaches. Some traditional development agencies have introduced new humanitarian financing instruments, such as the World Bank’s new Famine Action Mechanism, a financial instrument that can release prearranged finance to regions at risk of famine. The World Bank also just released its strategy for Fragility, Conflict and Violence 2010–2025, signalling a significant increase in funding to work on HDP and fragility in low and middle income countries.

Yet, the move to building a closer relationship between development and humanitarian actors remains contentious. The purpose of humanitarian action is to save lives, minimise suffering and protect the dignity of people. The modus operandi for humanitarian actors is also critical – impartial, neutral and independent humanitarian action. This can often run counter to development’s traditional focus on strengthening the capacity of the State and its institutions. Strengthening collaboration and coherence between these approaches is taking time and some key issues related to principles and preserving humanitarian space have yet to be resolved. Reports from the field are mixed, with recent reports highlighting that “the nexus is easy to say, harder to deliver, and still surprisingly controversial”.

Into the fray – DAC recommendations

In response, last year the OECD’s Development Assistance Committee (OECD DAC) published its recommendations on the HDP nexus. The recommendations articulate a focus on joint risk-informed analysis, addressing root causes and structural drivers and using political engagement at all levels to prevent crises, resolve conflicts and build peace. This promotes a pragmatic approach, building on the comparative advantage of each of the HDP domains. It does this while recognising the primacy of humanitarian principles, access and space. While not addressing all challenges, this guidance document forms a critical and common reference point for all actors.

Implications for the review of Australia’s international development policy

Australia has introduced elements of nexus programming, including multi-year funding, in its humanitarian assistance to populations affected by crises in Syria, Iraq and Afghanistan, and plan further support for Myanmar and Bangladesh. A recent evaluation of the Syria package was positive. This is a good start but more can be done. The impact of nexus thinking on DFAT’s development assistance in our region is less clear. Australia delivers the bulk of its assistance in Asia and the Pacific, the most disaster-prone region in the world, and home to 10 countries defined as fragile, according to the recently released OECD report on states of fragility. Yet, a humanitarian lens is rarely applied to mainstream DFAT planning, business practice and performance frameworks.

Importantly, a nexus approach would require DFAT to ensure its aid investment and sector plans more systemically address the drivers and root causes of humanitarian issues (a recommendation that was also made by the OECD Development Co-operation peer review in 2018). Further to this, these plans need to integrate preventative methods and approaches such as conflict resolution, peacebuilding, disaster risk reduction, pandemic preparedness, resilience and climate adaptation. The predictive tools and methods to do this work are increasingly available: for example, data and satellite imaging of weather forecasts and predictive tools for conflict prevention.

Good practice would also be to ensure that contingency plans for known risks, such as seasonal droughts and cyclones, are mainstreamed through all planning processes. These contingency plans could identify pre-existing financing, enabling anticipatory and preventative action to take place prior to a crisis being realised. DFAT can learn from work being trialled in this area by donors and agencies such as DFID, the Start Network and Red Cross. DFAT country plans could also support more investment in social safety nets that address humanitarian needs and preserve livelihoods during and after emergencies, with complementary and flexible financing available in emergency contexts to meet the needs of the most vulnerable who often still fall through the gaps in these nets.

The past few months have shown the significant disruption that humanitarian crises can bring to human lives and long-term development outcomes. It has also shown the critical importance of being able to react quickly to unforeseen crises. It is timely for humanitarian action, along with peacebuilding, prevention and risk reduction, to move from the margins of aid policy to become more central considerations. Given the global momentum, there is much more the Australian Government can do to make its development and humanitarian work more complementary and coherent. There is a cost of doing nothing if this opportunity is not taken.