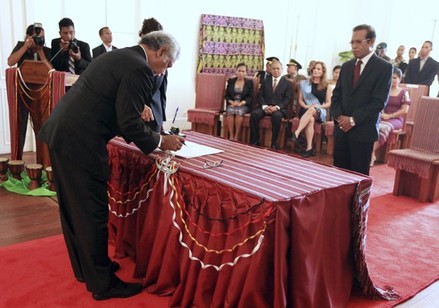 On 8 August 2012 the Fifth Constitutional Government of Timor-Leste, formed following Parliamentary elections on 7 July and led by Prime Minister Xanana Gusmão, was sworn in by President Taur Matan Ruak (better known as TMR).

The speeches given on the occasion of the swearing-in by the Prime Minister and the President were rather different in theme and tone. The PM’s speech was upbeat: he hailed the achievements of the government he had led over the preceding five years in breaking the cycle of violence that had plagued Timor in the initial years following its independence in 2002, and committed the new government to consolidating stability and bringing progress and welfare to all Timorese. The policy priorities which he outlined in his speech – health, education, social protection, infrastructure, building the non-oil economy – drew on the themes of the twenty-year Strategic Development Plan which his previous government had developed and seen through Parliament in 2011.

In contrast, the President’s speech focussed on the immediate challenges confronting the country, and the language was uncompromising:

To build the country we dream of we have ahead of us battles so hard and stringent as the battles we have had in the past….No one disputes that in the last ten years we have made significant progress. Yet as we look around us and analyse the situation of the country, what do we see? We see very low levels of income, a fragile economic fabric, high external dependence, low levels of infrastructure, unbalanced regional development, with unruly urban growth and large differences among cities and with rural areas, low levels of wellbeing, a weak administrative structure and low technical and scientific wellbeing.

The President’s remarks reflected a broad concern about the extent of the urban/rural divide and patterns of social inequality in Timor-Leste. While the flow of petroleum revenue has pushed up economic growth and gross national income, the statistics belie the real living conditions of much of the population. Timor-Leste remains in the low human development segment of UNDP’s Human Development Index, only slightly ahead of PNG and just behind Pakistan and Bangladesh. Data included in the 2011 Strategic Development Plan [pdf] indicate that almost half the population lives below the poverty line and 58 percent of children are stunted due to malnutrition.

Around 75 percent of the population lives outside the urban areas and is largely dependent on subsistence agriculture. Opportunities for wage labour are limited, with earnings otherwise coming from the sale of coffee or small agricultural surpluses. An important distributional initiative of the last government was the introduction of pensions for the elderly and disabled, poor female-headed households and veterans. While individual payments are modest, in total over $US100million is distributed annually, much of which goes into rural households. Prime Minister Gusmão, in his swearing-in speech, undertook to embed the assistance scheme.

While social transfers are bringing cash into rural communities, the reach and quality of other government services in these areas remains relatively poor. The UN Transitional Administration controversially established a highly centralised government administration despite some strong calls for a much more deconcentrated model. After independence, successive governments have put decentralisation on the public policy agenda, but so far it has gone no further. In his swearing-in speech, PM Gusmão foreshadowed action on decentralisation, although it is unclear from his statement what form it will take.

While the countryside languishes the capital, Dili, has become a boom town. The process began under the UN Transitional Administration: the city was cashed up by the international presence and became a magnet for internal migrants and returnees from across the border in West Timor. Dili’s population has almost doubled in the last decade and the last census showed a disproportionate number of males, most marked in the 20-39 age group. Job opportunities, however, fall well short of the numbers entering the labour market.

How will these issues play out in the life of the government, and what influence is the President likely to have? Under Timor-Leste’s constitution, power to initiate policy and legislation is concentrated in the Prime Minister, working as necessary through the Parliament. The President, however, has important powers to influence the direction of public policy, including through the request for judicial review of legislation and through the exercise of legislative veto. The first government after independence involved a very uncomfortable cohabitation between a politically opposed Prime Minister and President, and then President Gusmão used both his moral authority and his formal powers to stymie key policies of the Alkitiri government. Cohabitation arguably re-emerged in the latter years of the last government as PM Gusmão and President Horta diverged, most obviously over fiscal policy.

President TMR is a close ally of PM Gusmão: their relationship goes back to the days of the resistance struggle and TMR took over as on-the-ground leader of the armed wing after Gusmão was captured and imprisoned by Indonesian forces in 1992. The PM threw his considerable authority as charismatic leader and national hero (although, as he was careful to distinguish, not as PM) behind TMR’s run-off campaign for President. But as TMR settles into his role, will he seek to shape the policy agenda? He has already shown he is no rubber stamp, objecting to the Prime Minister’s nominee for Minister for Defence who was subsequently withdrawn. More recently, he has used his public declaration of assets as a platform to advocate “clean and self-disciplined politics” and to decry the corruption that “is slowly and insidiously infecting our society”.

Prime Minister Gusmão is no stranger to the effects of Presidential activism and may be anxious to forestall it in the current term. In his swearing-in speech, the Prime Minister addressed the following words directly to the President: “We believe that the working relationship between our two institutions will be guided by a spirit of cooperation, trust and solidarity.”  Presumably no Prime Minister – or President for that matter – can find much joy in cohabitation.

Sue Ingram is a PhD student with State, Society and Governance in Melanesia, researching post-conflict political settlements in Timor-Leste and Bougainville. Sue has previously worked as a senior executive with the Australian Government, held senior posts in UN and regional peacekeeping and stabilisation missions and worked as a governance consultant.

Dr Sue Ingram is an Honorary Senior Policy Fellow at the ANU College of Asia and the Pacific. She has worked as a senior executive with the Australian Government, held senior posts in UN and regional peacekeeping and stabilisation missions and worked as a governance consultant.