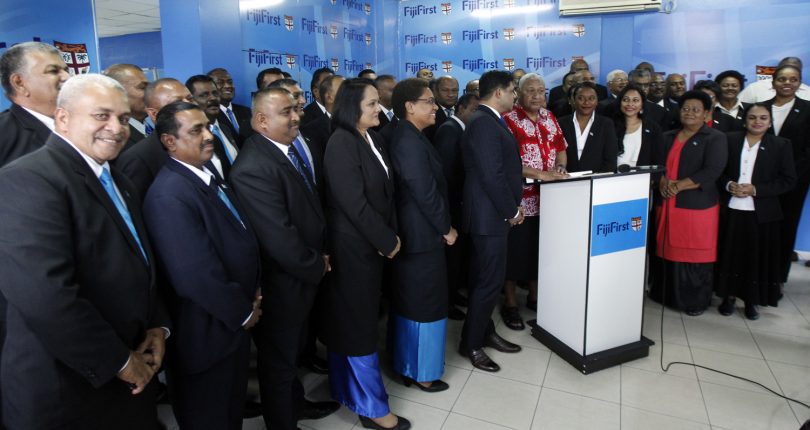 Fiji went to the polls on 14 November 2018. The incumbent FijiFirst Party won a narrower victory than expected, with just over 50 per cent of the vote. The main opposition party, the Social Democratic Liberal Party (SODELPA), increased its vote share from 28 per cent in 2014 to almost 40 per cent. While six parties contested, just three — FijiFirst, SODELPA and the National Federation Party (NFP) — won seats in parliament.

Women were key players in the 2018 election as both voters and candidates. While women have historically been under-represented in Fijian politics, the 2018 election brought a record number into parliament, where women now hold ten of the 51 seats. This blog examines how women candidates performed in the election and what lessons this might hold for further increasing women’s participation in politics in the future.

Women’s participation in the 2018 election

The increase in women candidates — 56 in 2018 compared to 20 in 2014 — was largely due to strong representation in the candidate rosters of minor parties, most notably the Humanity Opportunity Prosperity Equality (HOPE) party, which fielded 19 (68 per cent) women candidates. The number of women candidates fielded by parties with parliamentary representation — FijiFirst, SODELPA and the National Federation Party (NFP) — remained at similar levels to 2014.

In 2014, five of the seven political parties contesting the election had female presidents or party leaders. Since then, men have replaced women in the positions of FijiFirst Party president (Jiko Luveni resigned as the FijiFirst party president in 2014 to take up the position of speaker), leader of SODELPA and president of the NFP. While women are in prominent leadership positions in other parties, women’s representation in leadership positions in the most electorally dominant parties has significantly declined.

Nevertheless, the 2018 elections had a relatively positive outcome in terms of women’s representation. Ten women were elected to parliament, two more than in the 2014 election. This means that Fiji remains amongst the highest-performing Pacific island countries in terms of women’s political representation. The 2018 election results put Fiji on par with the US House of Representatives, and just outside the top 100 countries in the world in terms of the proportion of women in parliament.

Analysis of the open list proportional representation (PR) electoral system used in Fiji has suggested there is a ‘coat-tails’ effect taking place that affects women’s representation: “the possibility of a pattern developing of female candidates of dominant parties riding into Parliament on the coat-tails (or sulu va taga) of populist male leaders who have capacity to amass votes, cannot be ignored”. In 2018, the party leaders of FijiFirst and SODELPA won significant personal vote shares, with Bainimarama winning almost 37 per cent of votes cast and Rabuka gaining almost 17 per cent. The extent to which the coat-tails effect can be seen in the results of the 2018 election, however, is largely confined to FijiFirst and appears relatively gender-neutral. Thirteen of FijiFirst’s 27 MPs (including three of their five female MPs) won fewer than 1,000 individual votes, while no SODELPA MP won fewer than 2000, and the lowest-polling elected NFP MP, Lenora Qereqeretabua, won 1,811 individual votes.

What can be learned from the 2018 election

Unlike in most Pacific countries, parties play a crucial gatekeeping role in Fijian politics. Parties have always been relatively strong in Fiji, and this control was solidified with the 2013 adoption of an open list PR voting system with a single whole-of-country constituency. While two independents ran in the 2014 election, including female candidate Roshika Deo, neither came close to meeting the five per cent electoral threshold to be elected. No independents contested in 2018. This signifies the extent to which parties dictate political access. Increasing women’s representation, therefore, requires sympathetic party leadership and inclusive party structures. In this respect, the decline in the number of women in senior party leadership positions, especially in the largest parties, is concerning.

Yet, the electoral system also prioritises personal popularity, with candidates’ access to parliamentary seats dependent on both the overall vote share of their party and their individual vote share. This means that women’s chances of gaining access to parliament can be boosted by the profile-raising of women candidates. Looking forward, it will be important to learn from the campaigns of candidates such as Lynda Tabuya, the highest-polling female candidate in 2018 (and fifth highest-polling candidate overall), who increased her personal vote share from the 2014 election sixfold.

Finally, it is necessary to recognise that women in Fiji are far from a homogenous group, and intersecting ethnic, religious, cultural and other identities also act to facilitate or hinder access to politics. The participation of Indo-Fijian women has historically been at a lower level than that of indigenous Fijian women, and the make-up of the new parliament reflects this trend. In particular, indigenous women from chiefly families have been comparatively well-represented in Fijian politics. Some have suggested, however, that the poll results in 2018 indicate that chiefly authority has lost its electoral salience for both male and female candidates. While the increase in women’s representation is promising, further analysis on which societal groups are over and under-represented within the broad category of ‘women’ is important to gain a full account of the status of women in politics in Fiji.

This post was originally published as Department of Pacific Affairs (DPA) in brief 2018/27.