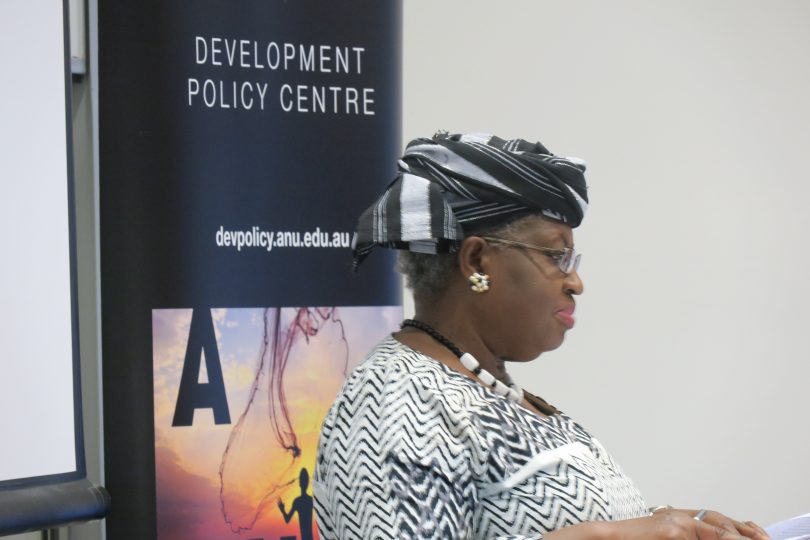 This is an edited extract from the 2017 Mitchell Oration “Development: towards 21st century approaches” by Dr Ngozi Okonjo-Iweala.

Multilateral development banks (MDBs) face four challenges they will need to confront if they are to be fit for purpose in helping the world deliver on critical development problems and on the Sustainable Development Goals (SDGs).  These are the challenges of relevance, legitimacy, scale and urgency, and business model.

Beginning with the first challenge: relevance. When most MDBs were first set up they played a central role in funding development. Whilst they are still important in this role, today they have competition. The balance sheet of some national development banks and their lending have in some years surpassed that of the MDBs combined. In 2011, for example, whilst the World Bank Group, African Development Bank, Asian Development Bank, European Bank for Reconstruction and Development (EBRD) and the Inter-American Development Bank (IADB) committed a total of US$110.8 billion in lending, the Brazilian Development Bank alone lent US$103 billion whilst the figure for the China Development Bank was about US$163 billion. We also now have other significant flows such as remittances totalling over US$400 billion a year to developing and emerging market countries, while the trillions of dollars of liquidity in the international financial markets and the increasing access of more and more developing countries to this, may lead some to question the relevance of the MDBs. This was certainly the position of the Meltzer Commission set up by the United States Congress in 1998 to look at the function of the MDBs, and remains the position of an important segment of the US establishment today. And it is not only in financing that competition that the question of relevance comes up for the MDBs. It comes even in knowledge transfer and capacity building where over time they have built up a formidable capacity.

Let me use myself as an example. As a Minister in my first term of office (2003-2006), when I needed help on tax administration and tax policy to improve domestic resource mobilisation, I turned to the World Bank, who told me it would take six weeks to put a team together. I then turned to the IMF, who sent a wonderful expert from this great country Australia. But they could only stay for three weeks.

So, in my second term (2011-2015) with the same problem persisting, I turned to the consulting company McKinsey to help me, and within two weeks they were in operation with two people continuously in my tax office for six months, and a monthly assessment of progress by a senior partner. The lesson to be learned here is one of speed and presence if one is to remain relevant.

What about the issue of legitimacy? This can be a serious challenge for MDBs in the 21st century, since many shareholders no longer feel that the institutions belong to them or reflect their interests and priorities. For the Bretton Woods institutions, like the World Bank and the IMF, this may be an even more serious problem because the voting power tied to shareholding structure has simply not evolved to reflect the changing evolution and economic weights of emerging markets in the new global economy.

For example, China alone accounts for 25 per cent of global growth, while emerging markets and developing countries contribute over 50 per cent of global GDP. Yet, despite the recent welcome adjustments made in IMF quotas and related changes to voting power in the International Bank of Reconstruction and Development, China has 4.59% of voting power, compared to Japan at 7.11%, and the United States at 16.45%. Meanwhile the total vote for the BRICs amounts to 13.1%, while for the 54 African members voting power is just 6.88%. Australia recognises this problem; I quote the Foreign Policy white paper “Australia will support reforms that give new and emerging powers a greater role in the international system. Some change to institutions and patterns of global cooperation is inevitable, necessary and appropriate to reflect the greater weight of countries such as China, Indonesia, India, Nigeria and Brazil” (pg. 7). But powerful shareholders in Europe and the United States want little or no change. All this raises the question of legitimacy. Furthermore, the way leadership is chosen (and I am of course not an unbiased observer) and the way in which the board and governance is structured, also undermine legitimacy. These were certainly contributing factors when the BRICs opted to start their own New Development Bank (NDB) and China, the Asian Infrastructure Investment Bank (AIIB) on whose advisory board, for purposes of full disclosure, I sit.

The third challenge is that of scale, which is intrinsically linked to urgency. To understand why, consider again the issue of how we are to fund the SDGs, and the investments needed for a low carbon growth path to mitigate climate impact. Both will require funding in the order of trillions of dollars. The United Nations Conference on Trade and Development (UNCTAD) estimates a bill of US$5-7 trillion a year is needed to address the SDGs, climate change, basic infrastructure, food security, migration, health and education etc.

At current levels of investment there is an annual gap of around US$2.5 trillion. Given that the annual combined lending of the entire World Bank Group and other MDBs ranges from US$103 billion to US$115 billion, it is easy to see why this has been dubbed the “billions to trillions” challenge, or in order words scale.

Urgency comes into the equation by virtue of the fact that if you don’t scale investments quickly, already severe climate change impacts, including on poverty and conflict, could escalate. For example, by 2030, without scaled investment we could see another 100 million or more people in Africa joining the 400 million who already live in poverty.

This issue of failing to scale is one of the reasons I strongly believe MDBs have not been able to make as big an impact on their goals of poverty eradication and shared prosperity as they could. One of the ways to overcome this and scale is to leverage the billions in multilateral and bilateral aid to attract the trillions of dollars from the private sector. The MDBs are beginning to do this as they realise they will have to make changes to their business model and will need their shareholders to support them.

First is the push for creativity and innovation to develop financial and risk management instruments attractive enough to the private sector to unleash tens of billions of dollars. Some MDBs, such as the World Bank and the African Development Bank, are also seeking additional capital to enable them to more effectively pursue this leverage. Next is a broadening of the mandate of these institutions. Virtually all were set up to focus on long-term development, with little or no involvement in humanitarian crises, conflict and security related issues, emergencies arising from natural disasters or pandemics, or other crises. These all technically fell outside their charter, the original intention being that other organisations, such as the UN, would handle them. That business model no longer suits these emerging challenges of the 21st century.

Shareholders of MDBs have indeed recognised this problem and have sought to tackle these extra development issues through special resources known as trust funds. The proliferation of trust funds is a clear sign of just how inadequate the present MDB business models have become, and the kind of earmarking it leads to among donors is an indication of how much it can stretch legitimacy, as funders seek to exert control over how and where resources are spent.

I have spent some time on the challenges confronting the MDBs if they are to help the world deliver on 21st century development problems. Not because I am pessimistic about the MDBs, quite the contrary – I strongly believe that the MDBs are needed in order for the world to achieve the SDGs and the climate agenda. The truth is that if MDBs did not exist, you would have to invent them. Almost all the studies carried out on these institutions conclude that they possess many unique assets or attributes: objectivity and professionalism, apolitical nature, convening power, unique ability to bundle finance and knowledge, ability to handle policy dialogue that make them the best set of institutions to tackle development, and multi-country issues. They are well placed to handle negative spill-over effects, and externalities of country actors. They are also best placed to deliver on global public goods and contain the impacts of global public bads, such as pandemics.

But they cannot bring these good attributes to the fore unless they reform and re-engineer themselves to be fit for the 21st century. And they cannot reform or re-engineer along the lines needed without the willingness of shareholders to change and support them to do so.

The full transcript of the 2017 Mitchell Oration “Development: towards 21st century approaches” by Dr Ngozi Okonjo-Iweala can be found here. You can also watch the Oration livestream here. or listen to the the podcast here.

A development economist and former Finance Minister of Nigeria, Dr Okonjo-Iweala has served as Board Chair of Gavi, the Vaccine Alliance, since January 2016. She has twice served as Nigeria’s Finance Minister, most recently between 2011 and 2015 – a role that encompassed the expanded portfolio of Coordinating Minister for the Economy. In 2006 she served as Nigeria’s Foreign Affairs Minister, and has also held several key positions at the World Bank, including as Managing Director.