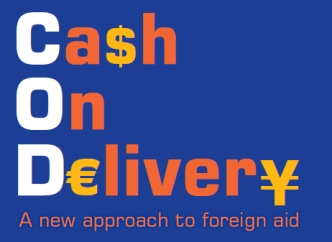 This article is part of the Aid Open Forum, a series of blogs to encourage debate, and the emergence of new ideas for the aid program. In this article, Richard Curtain looks at a new aid instrument that is creating a buzz in Europe and the US.

Cash on Delivery Aid (COD aid), a proposal from the Center for Global Development, promises to fundamentally change how aid is delivered, by only paying for verified results. What is this new approach to aid and could it help Australia to improve aid effectiveness in Timor-Leste and the Pacific?

Giving aid isn’t easy. Traditional aid programs can create unintended incentives for rent-seeking rather than results. Australia’s aid program operates in countries which already have a heavy dependence on aid. While a large aid program can provide much needed funding for service delivery, it can also be a major contributor to the resource curse: providing windfall gains which create and sustain a political class of rent seekers. This can distort the allocation of aid and the choice of activities that it funds.

Partly for this reason, traditional aid programs often have had disappointing impact on development outcomes. The Asian Development Bank in its strategy document ADB’s Pacific Approach 2010-2014 acknowledges that many of its efforts to support policy reform in Pacific countries have had little impact. The main problem is the lack of political demand in the recipient country for change. Elinor Ostrom, the 2009 Nobel Prize winner in Economics, notes that the impact of aid on the recipient country is often shallow and not sustained. This is caused by the large number of stakeholders involved with large differences in power and capacity, resulting in a viper’s nest of perverse incentives. A new approach is needed which provides positive incentives to both the donor and the recipient to deliver real and lasting outcomes (see Owen Barder’s post on this).

Cash on Delivery Aid aims to address these problems by refocusing aid delivery on achieving results. Its major innovation is in reversing the roles of the donor and the aid recipient to overcome the latter’s tendency to a passive response in the face of the demands of the donor. This is done by moving the responsibility for service delivery from the donor to the party receiving the aid.

What is COD aid and how does it work? 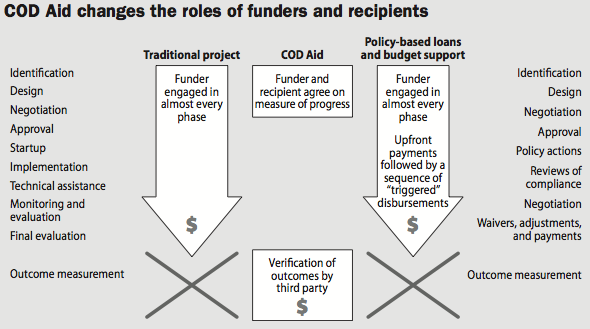 Cash on Delivery Aid links final payments to the recipient’s achievement of specific outcomes. The operating principle is that the recipient government can run the program in whatever way it sees fit, without interference of any kind from donors.

At the core is a contract between donor and aid recipient that stipulates a fixed payment for each unit of confirmed progress toward an agreed-upon goal. Once the contract is struck, the donor takes a hands-off approach. Payment is made only after progress toward the goal is verified by a third party. The contract, the amount of progress made, and the eligible payments are made public.

The proposal comes from the Washington-based Center for Global Development (CGD), a small but influential think tank. Nancy Birdsall, the Center’s President, and her coauthors have also written a book on the concept with a specific application to primary schooling. (Also see Nicholas Kristof’s article in the New York Times on A New Approach to Aid for a concise summary of the idea. Another more extended summary is to be found at Oxfam International’s Duncan Green blog entitled Cash on Delivery – worth a try?)

What are the benefits?

The potential benefits for both the recipient countries and AusAID’s domestic constituency are huge in terms of the focus on delivering sustainable outcomes. COD aid addresses the legacy of aid dependence by giving governments a positive incentive to build up their capacity to deliver improved services. As sustainable outcomes are achieved, the payments will taper off, avoiding any surprises about when the external funding will cease. Australian taxpayers will have a ready means of assessing the value of their investment in aid programs.

COD aid can also improve the effectiveness of other aid. For example, the success of technical assistance depends on how outside expertise is used by the recipient government. If it is used to prop up weak capacity, it is likely to do more harm than good. If it is a part of a government’s clear plan to lift capacity to achieve specific ends, it can play a valuable role. A delivery agency with a clear results focus and responsibility for paying for inputs is much better placed to know what external expertise it needs and for how long.

These potential benefits from COD aid are especially important in Australia’s aid programs in fragile states. The challenge for any donor in these settings is to ensure that its aid is having a long term beneficial effect and is not perpetuating weak institutions. COD aid addresses this challenge of aid to fragile states.

However, where initial capacity to deliver services is weak, a hybrid model of COD aid will be required. This will need to be based on working out agreed steps for handing over responsibility for achieving outcomes and who funds these steps. The essence of the new approach, however, is the donor’s focus on giving ever increasing responsibility to the delivery agency over a specific time frame. A fragile state setting will also require a detailed joint situation analysis to identify all the potential obstacles to ensure that these are addressed.

Who is trialling COD aid?

We’re also fundamentally redesigning our aid programmes so that they build in rigorous evaluation processes from day one. The focus will be on outputs and outcomes rather than inputs. In these difficult, economic times donors have a double duty, a responsibility to achieve maximum value for money: not just results but results at the lowest possible cost. With this in mind, we want to test the concept of cash on delivery aid that’s been mooted by the Centre for Global Development.

And interestingly, DFID has not used fragile states as an excuse to avoid trialling the concept as much of its aid now focuses on fragile states.

A new approach to Australian aid?

Cash on Delivery Aid is one aid instrument that deserves serious consideration as part of the Australian aid program. In addition to the benefits outlined above, it would also free up stretched staff from day-to-day management tasks, that with the doubling of aid threaten to overwhelm AusAID. Mark Baird has highlighted this problem in his review of evaluations of AusAID’s service delivery programs for the poor and his contribution to this blog.

All this will require, on AusAID’s part, a fundamental shift from the narrow form of accountability that now dominates its aid delivery system. This often takes the form of the donor ensuring that required processes are followed.  Mark Baird has also noted how an expanded aid program will require a new skills set within AusAID – one that goes beyond the risk adverse micro-management of projects. It will also require a different whole-of-government operating mode, to produce  country-specific, high-level bilateral agreements and third-party independent monitoring.

AusAID, in its response to the current review of aid effectiveness, has an opportunity to propose new ways of delivering aid. Any suggestions, however, need to show how they  overcome the perverse incentives generated by the existing system of aid delivery. In particular, the challenge for AusAID is to shift away from its close monitoring of inputs and outputs at the expense of outcomes. Included in this new approach must be a way of giving aid recipients real responsibility for the continued sustainability for aid funded initiatives.