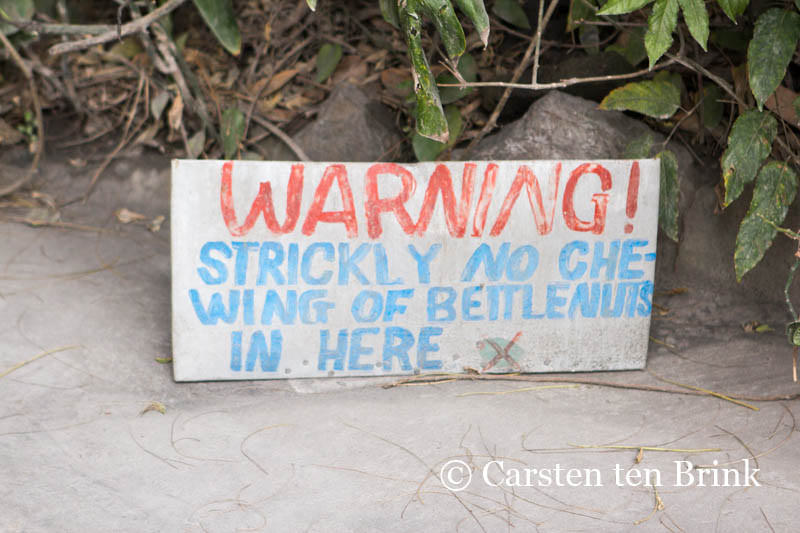 A sensible approach to tackling the betel nut problem

Early this year, the Hon. Powes Parkop, Governor for PNG’s National Capital District Commission (NCDC), sent social media into a frenzy when he announced that he would re-introduce the infamous and ill-fated buai (betel nut) ban on the public sale and consumption of betel nut if betel nut chewers and vendors do not “clean-up their act”. Since then, the announcement has taken a new twist, with the Commission coming out recently to explain that it is imposing a “partial ban” instead of the originally planned “total ban” on betel nut. The partial ban will target both the chewers and sellers of betel nut, and will restrict sales of buai to particular areas, rather than banning it outright. Boroko will be used as a model to trial out the partial ban. The Commission was forced to explain its stance on the betel nut ban after a few incidents occurred: the first in Hohola, where a tear gas canister used by police to disperse betel nut vendors almost became fatal when it made its way into the nearby school (Scared Heart Primary School); and the second an allegation that police stripped betel nut vendors in Port Moresby as a form of punishment. While the APEC Summit has created an urgency to clean up the city, these incidents and previous experience points to the critical need for the government to take a sensible – and different – approach.

It is already clear that the last time the ban was imposed (in October 2013), it not only cost the tax payers millions of kina but also led to the loss of human lives, destruction of thousands of kina worth of private properties, and the abuse of power by police and betel nut rangers – the very people responsible for enforcing the law. The cleanliness of the city did improve, but at the cost of the livelihoods of thousands of its citizens. In fact, a review conducted in 2017 by the NCDC on the betel nut ban found that a total ban on betel nut was not the best way forward for all stakeholders, including chewers and vendors. Even the partial lifting of the ban – with the introduction of a number of markets designated for the sale of buai – has had very little impact. Confrontations between vendors and buai city rangers is a major concern. The congested space within designated markets is a big issue, with cases of confrontation between various factions of vendors. Furthermore, the recent ban is not exclusive to betel nut; it will target other informal economic activities as well. This means that the ban will have wide-ranging implications and a significant impact on many Port Moresby residents who rely on informal economic activities for survival.

A new approach should be taken, based on mutual understanding and shared ownership. The starting point for achieving such an outcome is the NCDC, which should reach out to the vendors and producers of betel nut and engage them in a consultation process to find an amicable solution. A consensus needs to be reached, with the intention of getting everyone on board to achieve the desired objective, while also ensuring that livelihoods are not adversely affected. Prior to imposing the ban, the NCDC should organise a forum to gauge the views of those who will be affected by the ban. The forum should provide a set of recommendations to tackle the betel nut problem in the city.

A betel nut vendors and producers association should be created. The leaders of this association should work with the authorities to iron out any issues and develop an amicable way forward. To its credit, the NCDC has already set-up 11 associations for market vendors operating out of Gordons and Gerehu Market. However, there is a need to elevate the line of communication to the Office of the Governor or the Commission so that concerns can be promptly addressed.

Secondly, the forum should recognise the gap in terms of policy. While the National Informal Economy Policy exists, a separate policy on betel nut should be developed, given the nature of the problems associated with the trading and consumption of betel nut and the fact that betel nut has national outreach. The forum should also feature discussion around the setting up and strengthening of the role of trained food and health inspectors. The betel nut vendors association should be work with these inspectors to ensure compliance, particularly on section 13 (4) of the Informal Sector Development & Control Act 2004. A memorandum of understanding (MOU) should be signed to facilitate this.

Last but not the least, there should be discussion between vendors and the NCDC on how best to strike a balance between over-regulation and unrestricted selling. There needs to be an understanding that unlike marijuana and homebrew, the act of producing, consuming and trading betel nut is not a ‘crime’ as per the Summary Offences Act or the Criminal Code Act. Subsequently, it will be worthwhile to seek legal advice on the imposition of the ban during the forum. Discussion should focus on the pros and cons of the betel nut ban in light of PNG’s current economic environment (high unemployment, rising population, rural-urban drift, high cost of living), policy climate (financial inclusion, SME Development), health indicators, and cultural context. Lessons can be drawn from other countries where a betel nut ban has been imposed, in order to determine the extent of its benefits and costs. This should be complemented by discussions around the utilisation of alternative approaches to tackling the betel nut problem.

There are already plans to set up s wholesale market at 8 Mile to control the flow of betel nut into the city. The wholesale market will distribute betel nut into regulated areas only. It’s an initiative spearheaded by Hon John Kaupa, the new Member for Moresby North East, and Governor Parkop. A similar initiative was mooted by Governor Parkop when the buai ban was first introduced. This idea would involve the engagement of a private company (Askopina Ltd) to buy and then sell dehusked/packed betel nut, and has not yet materialised. In both cases, wider consultation is needed to ensure the proposed plans are supported by all parties concerned.

There are constituencies within PNG, such as Kokopo and Alotau, where their citizens’ chewing ethics and commonsense has helped prevent betel nut stains and waste from tarnishing the image of the towns. Perhaps the government could look at standardising these chewing ethics/commonsense in the form of instruction booklets to be made public to assist chewers from other parts of PNG to chew responsibly. Going further, these ethics can be enshrined in laws/rules and regulations. In the absence of this, the Informal Sector Development & Control Act 2004 provides a guide to regulate betel nut trade and consumption. Regular awareness-raising is key to embedding these ethics/commonsense into betel nut chewers. Clearly, the underlying betel nut problem in the city is largely due to irresponsible chewing. In addition, health authorities and the Medical Research Institute (MRI) should conduct regular research on the effects of the betel nut on chewers and the public. These findings should be made publicly available to inform decision-making by authorities, chewers and public alike. They should also delve into determining the acceptable levels of combination (betel nut, mustard & lime) and its effect on chewers’ health given the varying amounts of ingredients used by chewers. In the absence of information there are all kinds of misconceptions that will only lead to bad choices. Health problems in PNG should be tackled in a holistic manner, rather than by just targeting betel nut. Alcohol consumption and smoking also contribute significantly to deaths and lifestyle diseases. Furthermore, the abuse of alcohol compared to betel nut has a high cost on societies, leading to problems like domestic violence, family conflicts, marriage breakups, underage drinking, and rape. In the same sense, a holistic approach to tackling litter in the city should be used. Betel nut is not the only product generating rubbish. Plastics, bottles, smoke butts, papers, empty cans, food waste, etc. are all forms of rubbish that the NCDC must address along with betel nut.

There are countries such as Taiwan where betel nut is chewed by 90% of the total population and is responsible for a huge revenue windfall for the government. However, faced with rising cases of oral cancer, the government was forced to provide subsidies as incentives for betel nut producers to stop producing betel nut. Domestically, PNG’s betel nut industry is estimated to be worth in excess of one hundred million kina per year. Combine that figure with revenue generated through exports and you have a gold mine. Its significance for PNG’s economy is reflected by its high weight in the country’s CPI (10%).

PNG’s national security is at stake during APEC 2018, and the last thing we need is for police officers to be stretched thin keeping peace on the streets between authorities and betel nut sellers while also trying to protect the visiting leaders and delegates. In addition, we want to avoid scenes of police/rangers chasing after betel nut vendors while our guest are here. We need to move away from dealing with the ‘betel nut problem’ on an ad-hoc basis and instead work towards finding a lasting solution. It all starts with taking a sensible approach towards addressing the problem, and that sensible approach revolves around the need to find an amicable solution to the betel nut problem. The ban has already had negative affects, however it is hoped that a sensible solution will come about after NCDC reviews the implementation of its new partial ban in six months’ time.