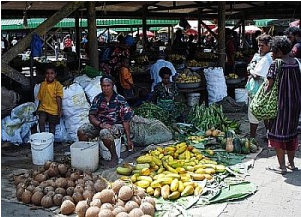 In Papua New Guinea it is government policy to encourage growth and development of the informal economy. This may surprise observers aware of how often the ‘informal sector’ is the subject of controversy. After years of effort, a national informal economy policy [pdf] was adopted by the National Executive Council (NEC) in 2011, driven by the then Minister for Community Development, Dame Carol Kidu. She was supported in this by the Consultative Implementation and Monitoring Council (CIMC). Sadly, the policy lost momentum after Dame Carol departed the Ministry and retired from politics. Three changes of Minister and loss of continuity in the senior bureaucracy have contributed to stasis in the meantime.

As Dame Carol found, gaining support for the policy was an uphill task in the face of entrenched antipathy to the ‘informal sector’ among some members of the PNG political class. At both local and national levels there are many examples of this antipathy, which reflects an elite psychology distanced from ordinary people who throng the streets and markets of the towns. It suggests an inferiority complex, a sense of shame that such people are a barrier to ‘modernization’. The epicentre of this disgust is the street trade in buai (betel nut, Areca catechu). While city authorities are entitled to feel that public consumption resulting from the trade is a blight on the appearance of towns [pdf] and a risk to public health, it is also a model domestic industry, in terms of the numbers of people it supports, the income generated, and the efficiency of its logistical system. We can soon expect to see vendors of buai and other commodities cleared from the streets of Port Moresby as part of a clean-up in preparation for the South Pacific Games. What we cannot expect any time soon is a sensible attempt to solve the dilemma — not of the buai trade itself, but of the public consumption of betel nut — while retaining the considerable economic benefits it yields to low-income people.

It is a mark of the immaturity and limited scope of the PNG informal economy that it still lacks a sufficiently diversified set of activities, so that a single informal industry has assumed such notoriety. The national policy adopted by the NEC suggests measures to encourage a more diverse set of ‘informal’ activities, but implementation of these has been slow due to budget constraints. In PNG the informal economy is too small, not too large and is still too limited in scope, scale and contribution to national output. A better functioning and more diverse informal economy is seen as necessary to increase the efficiency of linkages between mineral enclaves and the broader population.

A new Minister for Community Development, Youth and Religion (the Hon. Delilah Gore) and a new Departmental Secretary (Ms Anna Solomon) now give hope that the national policy can gain traction and impress itself on a broader range of government agencies. Certainly the Department seems now to have a renewed sense of ownership and commitment to the policy. It was adopted too late to figure in the Medium Term Development Program 2011-2015 (MTDP) [pdf] but the Department must now seize the opportunity to have the policy’s perspectives on informality reflected in a forthcoming revision of the MTDP. It is now establishing an Informal Economy branch, which will raise the status of the national policy from supported program to integral element of the Ministry. The original trigger for the national informal economy policy was earlier, ground-breaking legislation, the Informal Sector Development and Control Act 2004. This unusual law defined ‘informality’ in the PNG context and provided for the regulation of informal economic activities so as to nurture their growth. The NEC decision adopting the policy called on the Constitutional Law Reform Commission (CLRC) to review this 2004 legislation ‘to align [the legislation] with the National Informal Economic Policy’. Significantly, this was to be done ‘in collaboration with’ the CIMC’s Informal Economy Sectoral Committee.

This review process will likely be completed this year, with a CLRC submission to the NEC. The Informal Economy Sectoral Committee, in the spirit of collaboration called for by NEC, is seeking dialogue with CLRC before the submission is completed. The Committee is concerned that any recommendation for a model law to be adopted by provincial and local governments would create a problem, since the national Department for Community Development lacks decentralized capacity to monitor, coordinate and provide advice on implementation. The Committee also hopes the review will recommend a clear role for the Department itself, whether as implementer and regulator, or simply as coordinator. It is also essential that the revised Act should be comprehended in the new, revised MTDP.

CLRC should draft a law that is implementable, not one as easily ignored as the current Act. With the recent decision by the government to establish District Development Authorities it is important to determine how the informal economy law is going to be implemented. CLRC should identify responsibility for implementation at the provincial, district and local government levels. It is also critical to make the link between the national government and the provincial and local level governments clear in the law, something not done in the current Act. “Pegging” all relevant administering authorities to a national agency will ensure that the Act aligns with the national policy, whose adoption by Government required the law review process in the first place. A separate issue concerns the need for the Act to distinguish informal economic activities clearly from SME (small and medium enterprise) activity, which is currently the subject of separate government attention (focussed in part on the reservation of small business activities for citizens). To avoid inter-agency conflict it is necessary to define ‘informality’ clearly and to emphasize the quite important differences in culture and operations between ‘small’ and ‘micro/informal’ enterprise and their different regulatory needs.

When a new Act is finally in place, aligned with the national policy adopted in 2010, there will be a need for continuous improvements in the policy framework for supporting socially-beneficial informal economic activity. This is an area requiring support from development partners and government. Development partners are beginning to understand the important role of the informal economy, but greater investments are required of them — especially focussing on empowering women, who are the majority of participants. Women must understand their legal rights, while officials responsible for the regulation of informal economic activity must be trained for the role. Periodic surveys of the informal economy, focussing on the scale and scope of activities, and estimates of their economic contribution, will guide such policy improvement. Such surveys should report on supply-side constraints and bottlenecks affecting the productivity and growth of the informal economy and on bureaucratic and other obstacles to transition from ‘micro’ to ‘small’ (or informal to formal) enterprise for those with the potential to make that progression. These efforts would complement the current government emphasis on the SME sector.

Busa Jeremiah Wenogo is an economist working with the Consultative Implementation and Monitoring Council in Port Moresby. John Conroy is a Visiting Research Fellow at the Crawford School, ANU.