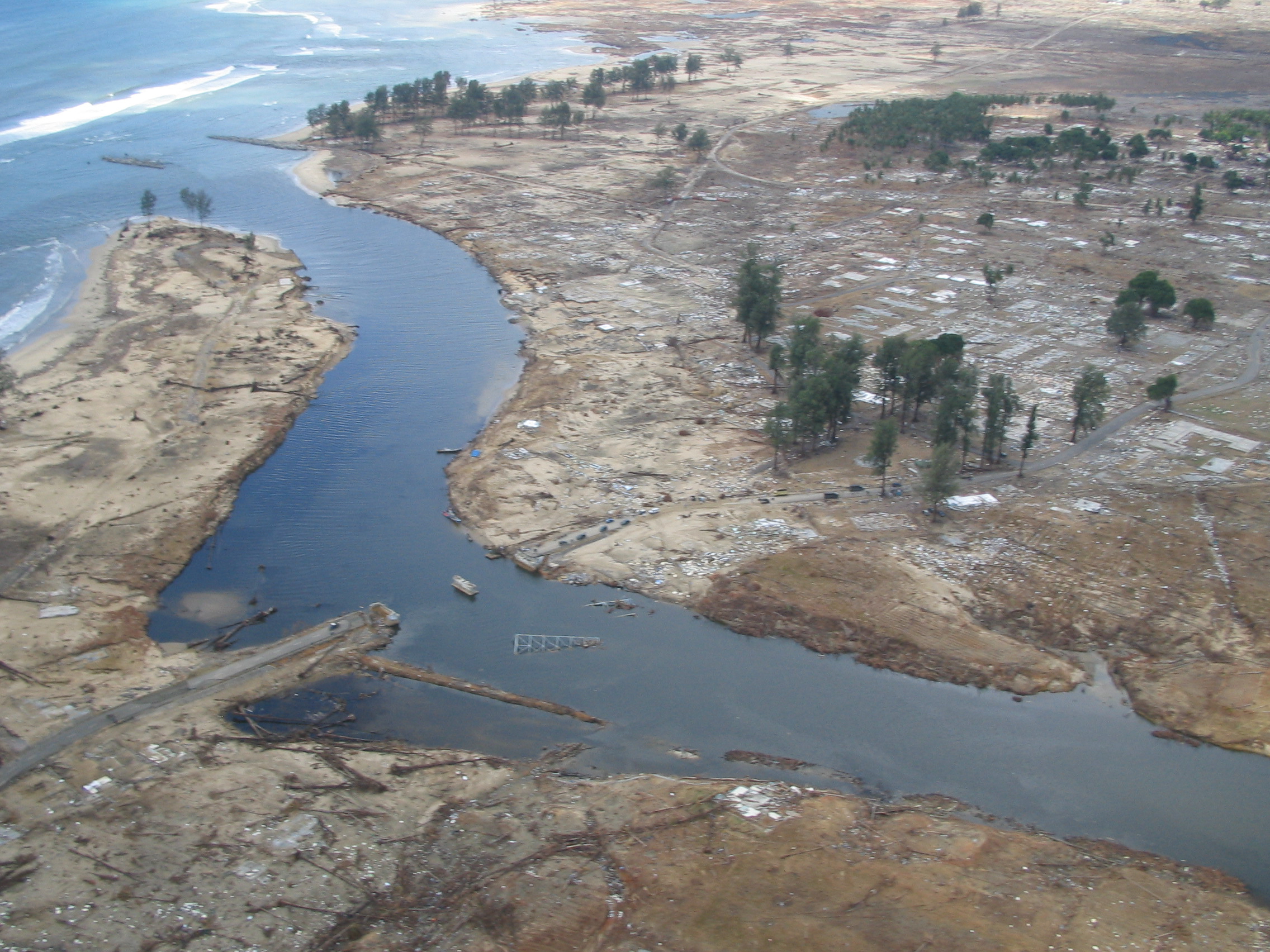 The emergency response to the Indian Ocean tsunami attracted an unprecedented US$13.5 billion in funding, of which some US$5 billion was for Indonesia. Unusually, almost 40 per cent of the former amount came from private donors, mostly the general public. Australian NGO appeals raised about A$350 million from individuals and corporations, the bulk of which was for Indonesia. Australia’s total official commitment to emergency response and long-term rehabilitation and reconstruction programs in Aceh and Nias, while possibly lower than private donations, was also large at about A$250 million.

Given the scale of the funding response, the Tsunami Evaluation Coalition was putting it mildly when it said the following in 2006.

The first instalment of this two-part post portrayed something of the chaotic and competitive aid environment in Aceh immediately after the disaster. In this second instalment, I say a little about how the Australian aid response unfolded in that environment.

Those of us responsible for advising the Australian government on the allocation of its emergency aid in Sumatra found it important, at least for our own peace of mind, to articulate some broad principles on which all our advice would be based. We did this quite explicitly, though not for any public purpose. The principles were obvious enough and approximately as follows.

Obvious though they might be, the above principles were not articulated with any great optimism. We were not naïve, and expected them to be honoured mostly in the breach.

Indeed, one of the first things in which we had to invest excessive effort was securing the rights to rehabilitate the Banda Aceh general hospital in which an ANZAC medical team had installed itself, and where Australian soldiers were undertaking a preliminary clean-up. The German government was seeking the same rights, and had a medical team in another part of the building. Therefore, after some occasionally tense discussions, it was agreed the two governments would collaborate in the rehabilitation effort, and both duly fastened their flags to the building. A visit to this hospital was the centrepiece of Prime Minister John Howard’s visit to Aceh on 3 February 2005. He was much-filmed there, cheek by jowl with Australian Defence Force (ADF) personnel. (A subsequent briefing with Australian aid personnel at the hospital went unrecorded). 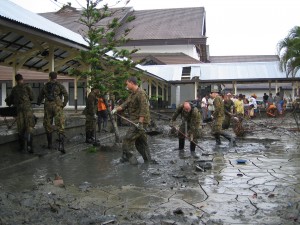 As it turned out, the hospital rehabilitation project was Australia’s only real flagship project. Most other things we did, with the exception of some early funding allocations to Australian NGOs who, as soon became evident, had no need for government money, were in fact in line with the principles above.

We worked very closely with a remarkably flexible and development-minded ADF team in Jakarta, Medan and Banda Aceh to get people and supplies to where they were most needed via C‑130 Hercules transport aircraft and Iroquois helicopters. There was an almost bottomless need for medical and surgical care in the early days after the disaster, and—though field hospitals and medical teams soon proliferated beyond need—Australia’s various state-based medical teams played an important role, complementing that of the ANZAC team, working from a co-opted private hospital. A sleepless Western Australian pharmacist played an invaluable role in helping local authorities triage pharmaceuticals, identify gaps, surfeits and out-of-date products, and in organising the supply of products needed to meet critical shortages, such as tetanus toxoid and immunoglobulin.

We organised on an interim basis the charter of a ship, a light plane and some smaller boats for the transportation of food supplies to neglected and inaccessible coastal areas and islands, effectively giving the World Food Programme some early delivery capacity while it put in place its own more extensive charter arrangements. We attended to the needs of people on the island of Simeulue and supported the somewhat unusual but very effective Australian medical NGO SurfAid to build on its pre-existing operations around Nias and the Mentawai Islands. Our early commitments of support for the Aceh provincial government and the Rehabilitation and Reconstruction Agency for Aceh and Nias (BRR) were unique and highly appreciated. And, a little later, our support for cash-for-work and village development programs was an efficient and appropriate way of supporting incomes, providing a wider economic stimulus and rebuilding local government capacity.

Paradoxically, our capacity to get sensible things agreed and done owed much to John Howard’s quite unexpected A$1 billion funding gesture, announced on 4 January 2005. The five-year Australia-Indonesia Partnership for Reconstruction and Development (AIPRD) was a strange beast, announced in the context of the tsunami yet not intended primarily for rehabilitation and reconstruction in affected areas. It fell to me in Banda Aceh to tell Indonesia’s bemused Coordinating Minister for Social Affairs, Alwi Shihab, that only a portion (later determined to be about 18 per cent) of the total was to be spent in Aceh and North Sumatra. The balance would be spent elsewhere in Indonesia, mainly for roads and schools financed on soft-loan terms.

The Howard government’s logic appeared to be that Australia had to make, or indeed had an opportunity to make, a really large gesture which would reset the bilateral relationship in the wake of the Timor-Leste crisis of 1999—but that any sufficiently large gesture would inevitably exceed the absorptive capacity of the affected regions. Moreover, confining it to a small corner of the nation would not be as beneficial in the long term for the bilateral relationship. In any case, the sheer size of the AIPRD commitment made it a flagship in itself, such that there was less need for Australia to erect monuments to its own generosity in Aceh and more capacity for Australian aid officials to direct funds to things that seemed actually useful. Meanwhile, the US and Japan vied to build highways.

Overall, Australia’s aid team did the best it could in an environment of indescribable confusion, oversupply and donor competition. We sought to distinguish ourselves by genuinely engaging with the local and national government, providing rapid and flexible support to organisations whose internal rigidities slowed them down and, with our ADF colleagues, making civil-military cooperation a rare reality during the early weeks in which ADF personnel and assets played a major role. We sought to base our advice, and to act, on principle, and for the most part our principles were respected. It is reasonable to assert that our speed and flexibility, together with the ADF’s, had a large and positive impact in the early days before the influx of other actors.

Nevertheless, the whole experience leaves very mixed memories. It is hard not to wonder what might have been different in the outcome if the government of Indonesia had been more selective about access to tsunami-affected areas, allowing in the main multilateral agencies and the Red Cross/Red Crescent movement, a handful of its real bilateral aid partners, and a handful of international NGOs with strong local affiliates or capacities, such as the Save the Children, CARE and World Vision. This, combined with a stronger performance by the UN Office for the Coordination of Humanitarian Affairs, would have increased the efficiency of the response substantially. 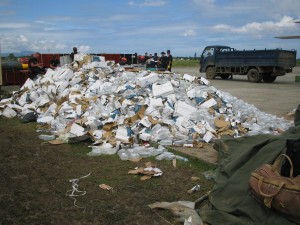 One must wonder also about the rationality of tax incentives that have no link to need or delivery capacity, which drive some NGOs into places where they have no business to be. Some Australian domestic charity organisations actually received public donations for work in Aceh on the mistaken assumption that these would automatically be tax deductible, and subsequently monstered the Australian government to confer deductibility upon them retrospectively. These were hardly the organisations that had the most to offer the people of Aceh.

Only a couple of weeks after Vice President Jusuf Kalla said, ‘Just get them in’, he was moved to say, ‘Three months are enough’. This edict, that international emergency responders should exit Aceh within several months of the disaster, was heard mainly as a message to international military forces—but was as much a message to the hordes of international development organisations that were rushing into and all over Aceh as he spoke. Ten years on, Kalla now finds himself Vice President of Indonesia for a second time. If, fate forbid, there were any comparable such disaster during the term of the present Widodo-Kalla government, it seems most unlikely that the first of his statements just quoted would be repeated.

The tsunami created a void into which flowed people, goods and money on an unprecedented scale. Sooner or later most of the right things were done by way of emergency response but there was far too much cacophony, self-interest and inefficiency. The void was one of human lives, and it deserved to attract a more self-effacing, coordinated and determined effort from Indonesia’s most capable international partners. A mere deficit of efficiency might not have left many needs unmet in this case, given the funding available. What was more obviously lacking in the response was dignity and true generosity, which involves knowing when to stand back. Ten years on, many of the internationals who were in Aceh in the early days and weeks after the disaster would find memories of the event less painful if they could feel that all their efforts had been directed to emergency response rather than to coping with confusion and inter-agency competition.

I have a photograph of an unknown New South Wales Fire Brigades search and rescue officer, looking down from one of the bridges over the wide Krueng Aceh river. The waterway is half-clogged with what appear to be thousands upon thousands of pieces of charred lumber, but which are mostly people’s dead bodies. While he and the other emergency responders who were there will always carry such images with them, far worse and more pervasive memories must haunt the people of Aceh and Nias. They are unlikely to speak about them, let alone blog, tweet or by other means blather. Their tolerance for the bumbling and self-obsession of international aid agencies is as nothing by comparison with their forbearance in the face of such enormous sorrow.

Robin Davies is the Associate Director of the Development Policy Centre. He was Minister-Counsellor (Development Cooperation) at the Australian Embassy in Jakarta from 2003 to 2006. The photographs above are his, taken during several visits to Banda Aceh and the west coast of Aceh.