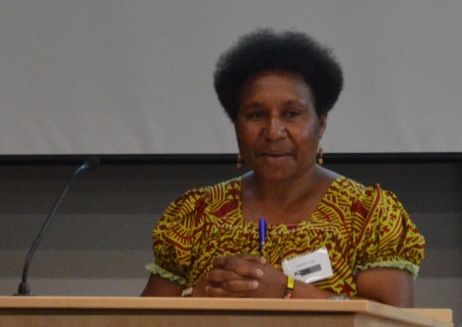 It is well known that gender-based and sexual violence are major problems facing Papua New Guinea. What is less widely recognized are the grassroots efforts underway to combat these problems, and the individuals leading those efforts. Everlyne Sap is one of those individuals. She is a gender advocate and chairperson of the Family and Sexual Violence Steering Committee of the Restorative Justice Initiative Association (RJIA) at Porgera in Enga Province, PNG. Camilla Burkot interviewed Everlyne during the State of the Pacific 2016 conference. You can listen to the podcast here, and read the full transcript here [pdf]. For an abridged version of their conversation, read on.

Camilla: To begin, can you give us some background on the issues facing Porgera before the Restorative Justice Initiative Association (RJIA) came along?

Everlyne: There have been a lot of social issues in Porgera. In the past, it was okay. The real Porgerans and their families were living there, with the traditional laws that abided then. But when the mining started, it pulled the people from outside of Porgera into the valley.

One of the common issues there is people go out looking for alluvial gold. So they go there, steal gold and come out, and the cash flow in the valley was very high. And when that happens, what happens? When there’s a lot of money, there’s a lot of social issues. They take their money straight to the beer club or disco.

They have money, so they forget about their wives and they go out with another woman and go drink, and then the other woman’s husband comes in, and he tries to retaliate. All these kinds of connected issues occur. When these little things happen between two people, it grows into a bigger issue and tribal fights occur. Lives are lost, homes are destroyed, government services and infrastructure are damaged during these fights.

The local level government couldn’t do anything. The district couldn’t do much about it. The police were helpless. Local leaders were on their own. They tried to do something but they could not, because they are only few, they couldn’t really talk for the whole. And they couldn’t try to go out, reach all the people, bring them together, mobilize them and talk to them about how to come up with a resolution to find peace.

Camilla: So tell me a little bit about where RJIA comes in.

Everlyne: There was this big fight in the valley some years back. Barrick provides bus services for its employees who live within about 10 kilometers from the mining, which ceased in 2009 for safety reasons. When the fighting goes on there are roadblocks, armed gangs, and serious problems on the road. Public travel is not safe.

Later on, when they saw that tribal fighting and other related issues were lowering down, all the stakeholders, including business houses, started looking for ways to sustain peace and stability in the community.

It started in 2012, and started mobilizing the leaders, and they formed a Leaders’ Interest Group (LIG) and Business Interest Group (BIG). And I’m the chair of the Family and Sexual Violence Steering Committee (FSVSC), which was formed after LIG and BIG in 2014.

Camilla: So RJIA came about originally as a response to law and order issues. How does that connect to family and sexual violence (FSV)?

Everlyne: When fighting goes on, it’s unsafe for me as a woman, and for children, to move from one place to another. If men come around with a gun or traditional weapons, they can shoot. They can rape. They can do all kinds of things.

So it’s not safe. And another reason is police and security personnel who were paid by Barrick were involved in sexual abuse of women who were looking for gold in Barrick’s vicinity. That was some years back.

Then when landowners get their land royalties, it’s men’s society. When they get the royalty payments, it’s a man who gets the check first. So they go out, straight to the beer club, or out of the province, take other women with them, and all the money is used up. When they come home, their wives and children are waiting, no money, no food – this can cause family problems, domestic violence.

So RJIA came up with this Family and Sexual Violence Steering Committee to address women’s issues and to empower women. And I feel I’m one of the empowered women in Porgera and Enga. Because I can stand in a public way, which is a great challenge for women. And I address issues, together with support from Barrick and funding which put me through training at Fiji Women’s Crisis Center, DFAT through PALJP and RJIA partnership trainings on Transformational Leaders Development Programs and FSV/GBV Male Champion programs.

Camilla: I’m interested to know a bit more about the approach you have taken to address FSV.

Everlyne: Barrick has good plans for community projects for the people of Porgera. It really wants to do more for the community, but it really depends on us, the local individuals and community, to make it happen for us to benefit.

In Enga Province, where I come from – I’m born there and I’m pure Engan, and I know my culture back to front – in order to address FSV effectively, I have to take an appropriate approach, knowing the culture and psychology of the people living there.

Men will say, “What’s that? Where are you trying to go? Get down.” They always say, “What is human rights? We don’t know about human rights. What’s women’s rights?”

So what I do is I walk around in a circle. I speak my language. I use these words, ‘respect’ and ‘understand’, when advocating for women’s rights and addressing FSV/gender-based violence (GBV). We don’t say, ‘we are coming here to do awareness on family and sexual violence’. That name, we had to put it aside and we use different language. It is difficult to advocate directly about FSV/GBV as it is not safe for the advocates.

Through the training that DFAT has funded and through the good relationship of RJIA, men have developed their mindset. The business interest group leader, and leaders’ interest group chairperson, these two saw an amazing change. In Porgera, no man will ever touch their child or hug or hold their babies. It’s entirely women’s responsibility. But now the Business Interest Group leader will take the child around, put it on his shoulder. And when he drives, he puts his wife in the front. That is unusual in Porgera.

So these two are changing, they are becoming agents of change and role modelling to others in Porgera Valley community. We’ve got 36 male advocates who have gone through the FSV training, and they are realizing now. And we would like to continue.

Camilla: Have you also been doing some work to strengthen institutions to help survivors of violence?

Everlyne: In the past, three or four years back, when women who experienced violence went to the police station to get help, they were told, “Go back. You go sort it out with your husband.”

And then they go to magistrate. Magistrates say, “Go and bring the man in. I’ll look into this next time.” Or “I’m busy.” You see, they’re all men.

And then when they go to village court, even if they get a big cut on the head, if they go there and ask for the village court, they would say, “You have three children. And the man has paid brideprice.” Traditional decisions are coming in, and she is suffering in silence. It was going on like that all the time.

But when the RJIA Family and Sexual Violence Unit was sent to the Paiam Police Station, we got four staff, and one of them is female. Barrick sponsored her to go to Fiji for training. So she prosecutes all the FSV cases at the district court.

The current local magistrate is now very good, unlike previous magistrates. The FSVU police unit is a new unit. There is big change happening now. It has never been like that. We really want RJIA to continue and have a big impact.

The referral pathway is now more coordinated. They are taken to Family Support Centre (FSC), where they need to get medical reports if they are sexually abused. That is one piece that was to be set up at the Porgera Urban Health Centre when the funding stopped. But now in Porgera, the remotest part, most women know their human rights, than ones that are supposed to know first, like Wabag town and Wapenamanda District. So it’s very interesting.

Camilla: It sounds like quite an amazing change from how things were. But the issue now, as you mentioned, is that funding is a problem. So the funding from Barrick for RJIA has stopped now?

Everlyne: Yeah. I don’t know what the reason is. Barrick also sold its shares to a Chinese company, the management has changed. I’m not sure. All I can say is the funding stopped, it’s almost a year now. Now law and order problems are trying to creep in, which is not a good story.

So I founded the Voice for Enga Women Association. At present there’s no funding, but voluntarily I’m advocating for family and sexual violence and gender issues in the rural areas and urban towns, and advocating for maintaining law and order. I’m also involving the women who are members of the Association to be creative and innovative in making use of the resources they already have in their villages, in farming, baking, making bilums, and sewing, to fight against poverty and to sustain themselves physically, financially, and psychologically. This will also have a positive impact against FSV.

Everlyne Sap is a gender advocate and chairperson of the Family and Sexual Violence Steering Committee, RJIA, in Enga Province, PNG. Camilla Burkot is a Research Officer at the Development Policy Centre.

Everlyne Sap is a gender advocate and chairperson of the Family and Sexual Violence Steering Committee, RJIA, in Enga Province, PNG.