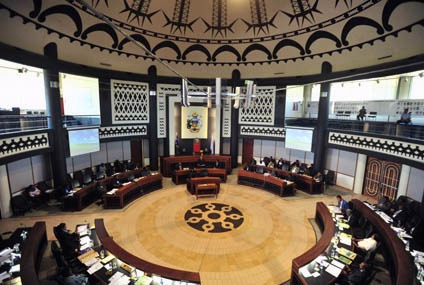 Parliament in Honiara last month passed the Constituency Development Funds Bill, 2013, in the face of the strongest public opposition to a piece of legislation that observers can recall. The Bill will shortly become law, and the government proposes to discuss with a parliamentary committee the rules to be made under it.

The new law will formalise the management of Constituency Development Funds (CDFs) under the overall direction of MPs, supposedly to assist the social and economic development of their constituencies. Such funds have existed for many years as appropriations in the national budget, but less formally, without legal status and on a much smaller scale than is now planned.

Results across the country have been mixed, often difficult to trace or audit, and politically controversial at local and provincial levels. The government intends to greatly increase budget allocations to these funds, which must mean less money for other public services and developments. Once again Solomon Islands appears to be mimicking its big neighbour, PNG, where such funds now operate on a massive scale.

The Bill was introduced in a rush and strongly backed by the PM and Ministers, suggesting to some observers that it was the price of holding together the present government. Opposition to the new law was coordinated by Transparency Solomon Islands (TSI) with internet-based Anti-corruption Network Solomon Islands (ANSI) and Forum Solomon Islands International (FSII).  TSI organised a petition signed by 600 people and a public protest at Parliament House, while ANSI and FSII engaged several thousand objectors to the Bill through social media linkages and by joining the TSI petition and protest.

The CDF Act will give statutory endorsement to a system of publicly-funded political patronage, in which MPs try to entrench themselves in power by buying votes and rewarding supporters. While some supporters claim this is a monetised version of ‘big-man’ power in traditional Melanesia and chiefly rule elsewhere, it is widely seen as simply legalising greater misuse of public funds.