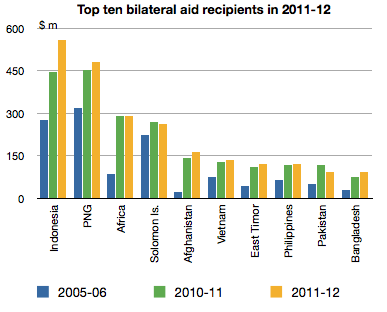 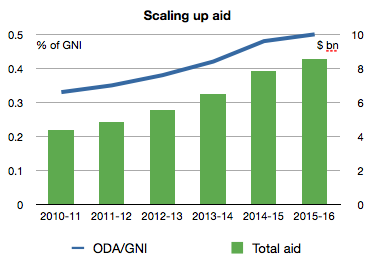 Australia can certainly afford to be generous. The background economic analysis for the federal budget indicates that we have enjoyed a staggering 19% improvement in our terms of trade this year.

But it is still very rapid trajectory for the aid program, and one which will require careful management. It is a positive sign that the bipartisan commitment to rapid growth in aid hasn’t yet come under any signs of real stress, but there is obviously a long way to go.

The Independent Review of Aid Effectiveness (disclaimer: one of the authors participated in the Review) has just handed in its report, and not surprisingly the budget doesn’t claim to make big changes in overall aid strategy. The budget notes that the government response to the Review is expected in the middle of the year.

The Minister’s foreword to the budget does make a strong commitment to aid transparency, and the additional detail given in the budget – including on other government departments and on aid management and performance monitoring – is itself a welcome follow-through on this commitment.

In country terms, the biggest winner from this year’s increase in total aid is undoubtedly Indonesia. Aid to Indonesia increased from $275 million in 2005-06 to $446 million in 2010-11, and is budgeted to expand further to $558 million in 2011-12. The budget emphasizes Australia’s support for Indonesia’s schools, which became a political football in the aftermath of the Queensland floods.

Papua New Guinea is a more surprising winner from the scale-up to date. Australia has increased its aid commitment to PNG from $454 million in 2010-11 to $482 million in 2011-12. This is again a significant increase, especially compared to the 2005-06 level of aid to PNG, $318 million. There’s no doubt PNG has the poverty to justify a higher level of aid. But whether continued increases are warranted given the challenges facing the PNG aid program (highlighted in the recent independent review of the PNG-Australia Development Cooperation Treaty last year) is another question.

Australia also continues to expand aid to Afghanistan and Pakistan. These two countries received only $70 million from Australia in 2005-06, but will get $250 million this coming year. Afghanistan is now the fifth largest recipient of Australian aid.

Governance and education the sectoral winners

In terms of sectors, the biggest increases in this year’s aid budget are for governance and education. Both of them increase by about $150 million. Education, the Australian aid program’s ‘flagship’, has been increasing for the last few years, and is now budgeted at $842 million. Much of the increase must be driven by the expansion in scholarships, but just how much is hard to say.

The increase in governance is more of a surprise after several years or no or little growth. With the 2011 advisor review and the subsequent crackdown on advisers and advisory fees, and given the heavy reliance of governance spending on advisors, the prior expectation must have been for governance spending to decline further.

Health funding is budgeted to decline this year, but big increases are expected in the future, with a new water, sanitation and hygiene initiative announced for the coming years ($433m over 4 years).

There’s a big increase in spending to support global environmental programs from $27 million in 2010-11 to $85 million in 2011-12. This reflects Australia’s commitments under the Copenhagen and Cancun agreements to fund mitigation and adaptation in developing countries.

There’s also a large increase for Australia’s NGOs. Core funding to Australian NGOs was only about $30 million when the Rudd Government came to power. It increased to $70 million last year and is budgeted to reach $98 million this year

As usual, the aid program got little mention in the run up to the budget. It didn’t get a mention in the budget speech, and it is unlikely to get much coverage from analysts. After all, aid is only, even with the scale-up, just 1.3% of total Commonwealth government spending. Yet, given the dire poverty of the intended beneficiaries of Australian aid, decisions about aid spending deserve a lot more analysis.

The Gillard Government certainly deserves credit for following through on its commitment to scale up aid, especially in a time of fiscal restraint. In an era of very partisan politics, one can only hope that the 0.5% target is one policy which all sides of politics continue to support.

Professor Stephen Howes is the Director of the Development Policy Centre at the ANU’s Crawford School.

Matt Morris is the Deputy Director of the Development Policy Centre and a Research Fellow at ANU’s Crawford School.

Jonathan Pryke is a Researcher with the Development Policy Centre.