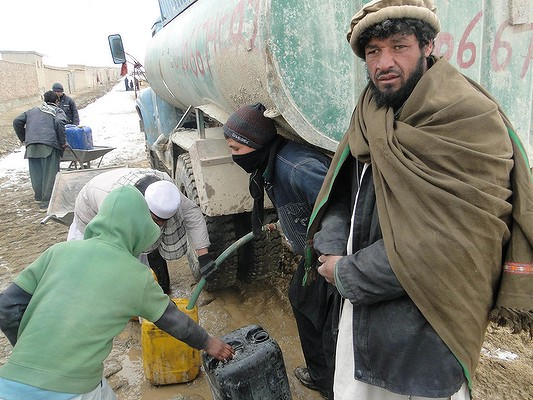 Without Running water, residents of AliceGhan que in the snow for water that is trucked in. Source: SMH

AusAID have just released a new Framework for working in fragile and conflict-affected states [pdf]. The framework recognises the limits of aid in fragile states:

“Development assistance alone cannot solve the problems of fragility and conflict…But development aid can play an important supporting role…the primary goal of Australian aid is to build more responsive states and resilient communities in order to support long‑term peace and stability, and create opportunities for development and poverty reduction to take place.”

The framework gives detailed examples of resilience building aid-funded work in these states, including: rebuilding infrastructure, supporting the design of an impartial electoral framework, improving the functioning of the formal and informal law and justice systems, and promoting the private sector. AusAID also identify some key areas for improvement. Of particular note, emphasis is placed on managing, not avoiding, risk and on effectively translating knowledge into practice. Watch the Devpolicy blog for more analysis of this new framework and it implications.

Last week, several Australian newspapers ran articles exposing the failure of the Australian-funded $8 million AliceGhan project which was meant to provide more than 10,000 returning Afghan refugees with a purpose-built housing estate – with running water, jobs and schools – in the outskirts of Kabul. This is not the first time the woes of the project have caught media attention. While construction was completed in 2009, a land dispute with a neighbouring community has prevented the installation of running water, and many of the promised jobs have failed to materialise. Currently more than half the 1025 houses are empty and deteriorating.

The future of the project is uncertain. Last year the Australian government awarded $16,500 for a need assessment, but the UNDP still expects “that all work will be completed in Aliceghan lots with high quality standards and according to 2011 timelines.” The Australian who managed the project in 2008-9 has stressed our responsibility not to abandon the families which remain in AliceGhan.

There have also been indications that AusAID is considering a new strategy in Afghanistan, with a focus on agricultural projects and strengthening local NGOs.

Bridges Across Borders Cambodia (BABC) yesterday (February 13th) recently released the report DERAILED: A Study on the Resettlement Impacts of the Rehabilitation of the Cambodian Railway [pdf]. The report critiques an AusAID- and ADB-funded project to restore 650km of railway which requires more than 1200 families to relocate. It found an atmosphere of intimidation and coercion led to families not receiving fair compensation and left unable to adequately resettle. According to BABC Executive Director David Pred :

“Our principal finding is that the resettlement process for this project has fallen well short of ADB’s policy requirements and basic human rights obligations…The ADB and AusAID must take urgent appropriate action..to remedy the situation and bring this project into compliance with international law.”

In December 2011, AusAID responded to similar compliants with an assurance that “Resettlement and compensation is being managed in accordance with the relevant laws and regulations of the Government of Cambodia and the ADB policies” and that while it was a “major challenge”, “one of the reasons Australia decided to become involved in this project was to ensure that people affected by this project would receive shelter and access to basic services after being resettled.”

Australasian Development Economics Workshop: call for submissions
The 8th Australasian Development Economics Workshop (ADEW) will be held 7-8 June 2012 at the Development Research Unit at Monash University, bringing together development economists from Australia and internationally with particular emphasis on the Asia-Pacific region. The workshop will be opened by Dr Michael Carnahan, Chief Economist at AusAID, with Professors Abhijit Banerjee and Esther Duflo (MIT) each presenting a keynote address. The Organizing Committee is inviting submissions of high quality academic papers on all aspects of development economics, particularly papers with policy insights relating to the Asia-Pacific region. All submissions should be sent by email in pdf format to gaurav.datt@monash.edu by 31st March 2011.

Are you a young professional or studying development? If so you might be interested in a new peer-coaching initiative being set up by whydev and Development Crossroads:

A peer coach is someone who is at a similar level to you in your field and knows and/or understands your work context. [Peer coaching] involves actively listening without judgment, reflecting back what he/she is hearing, asking probing questions, and helping you generate concrete action steps to move you forward…Some of the perceived benefits of peer coaching are: to overcome isolation, gain support, have a fresh perspective on work issues, relieve stress by debriefing, have a sounding board, discuss work issues with someone other than a boss (or colleague), experience the solidarity of knowing someone else is going through the same thing, and expand one’s network.

They describe the initiative in a couple of posts, and have a short survey you should fill-out if you’re interested in the service.

Kathryn Zealand is a Researcher for the Development Policy Centre. Aid Buzz is our monthly round up of the issues and news in Australian aid.