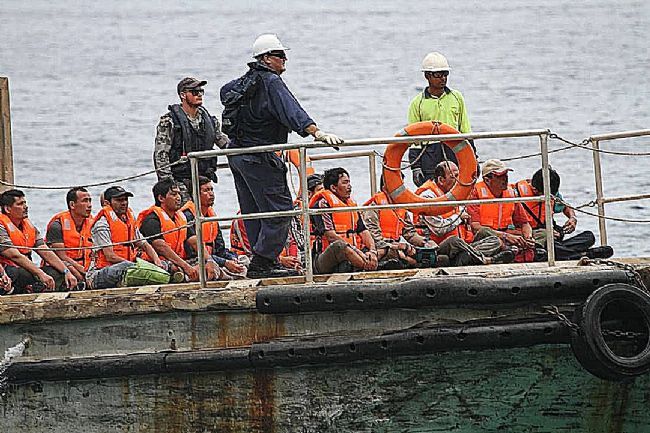 On Monday, Foreign Minister Carr confirmed that the Government will be cutting $375 million from its budgeted aid expenditure this year in order to finance costs associated with asylum seekers from the aid budget. The cuts will presumably fall on AusAID, the major aid spender, which means it will face a nominal decline in spending this current year. Where AusAID is cutting remains to be seen.

The Government has defended the move (foreshadowed in this Devpolicy post by Joel Negin) on the ground that it is both admissible and standard practice among aid donors to count in-country refugee costs (“transport and temporary sustenance” for a 12-month period) as aid, or Official Development Assistance (ODA), as it is called. Not all countries do: the UK, Italy and Ireland have made little or no use of this provision, and nor did Australia recently. But many charge hundreds of millions of such costs to the aid budget, including some we look up to as good and generous donors, such as Norway and the Netherlands.

Though one might have hoped for a more public process behind the changing of an important policy such as this, the rationale for including domestic refugee-related costs as ODA is solid, and has been accepted by the OECD (which sets the rules on what can be counted as aid) since 1988. We often spend aid in Australia (think of scholarships and research). And our aid budget covers humanitarian as well as development expenditures.

That doesn’t necessarily mean that this is a good use of aid. Much will depend on whether you think people waiting for a determination of their refugee status should be debarred from working. If they weren’t, it wouldn’t cost the Government so much to support them.

Leaving aside issues relating to asylum-seeker policy, however, even if one acknowledges the right of the Government to count these costs as aid, the manner and timing of the decision raise important questions about its commitment both to scaling up aid and to aid effectiveness.

On the scale up, it is important to see the announcement in its context. Australia is not a generous aid donor. Out of the top 15, we come 12th in terms of the aid generosity index (ratio of aid to GNI). There used to be a bipartisan agreement to doing something about that, but the 2012-13 budget of April this year watered down that commitment. In that budget, the Government increased ODA by only $300 million (to $5.2 billion) instead of the $700 million it had earlier promised (which would have taken aid to $5.6 billion). And it delayed the date for achieving its 0.5% of GNI (Gross National Income) target for ODA from 2015 to 2016. Achieving that target will require aid to increase each and every year between now and 2016 by an average of one billion dollars. Aid has never been increased by that much in a single year, let alone for four years running.

If the government wanted to send a signal that it was serious about scaling up aid, it could have simply added the $375 of asylum-seeker costs to the ODA budget for this year. Instead, driven by the imperative of returning the budget to surplus, it has held total aid constant, and reduced AusAID’s budget below last year’s level to make room for these extra costs. This doesn’t seem like the action of a Government which is intent on massively scaling up aid in general and AusAID in particular in the coming years. Given the negative signal, it is important that the Government quickly reaffirm its commitment to 0.5% by 2015, and to no further delays in the rate of scale up.

On aid effectiveness, the Independent Review of Aid Effectiveness, which reported in 2011 and in which I participated, listed as the first of a number of problems facing Australian aid a lack of strategic clarity, including a lack of funding predictability. Aid programs require long lead times to develop, and certainty of funding to succeed. For this reason, the Review argued that the Government should produce a 4-year budget framework to guide the scale-up. The Government agreed and produced the first multi-year plan for aid in April of this year.

This announcement derails the goals of strategic clarity and predictable funding. What could be less predictable for AusAID than a mid-year cut of almost 10%? I couldn’t say it has never happened, but I certainly not aware of a cut of this magnitude to AusAID outside of the budget cycle. The combination of this cut with the uncertainty over future aid budgets means that what the Government itself called in this year’s budget a “key element of effective aid”, namely “predictable, multi-year funding” is currently missing.

In addition, and in violation of the aid program’s new Transparency Charter, no policy has been released on what Australia’s position is on charging asylum-seeker costs to the aid budget. We’ve only been told that $375 million covers sustenance for refugees awaiting a determination. Other countries include other refugee-related costs; for example, some charge the costs of their resettlement programs to the aid budget. The Government also needs to clarify that it will only be charging costs for the first year in Australia, as that is all the OECD allows.  Without an explicit policy on ODA eligibility of asylum-seeker costs (both on- and off-shore), there is the risk that additional (and potenially massive) costs will be charged to the aid budget at a later stage, further increasing uncertainty.

To summarize, it would have been one thing to announce this change at budget time, based on a new, articulated policy on ODA eligibility of asylum-seeker costs, and to add the eligible expenditure to our other aid spending. It is quite another thing to do it mid-year, without an articulated policy, and to cut AusAID spending to make room for asylum-seeker costs. The decision casts further doubt on the Government’s commitment to scaling up aid, and it undermines aid effectiveness. It is a heavy price to pay in pursuit of a questionable commitment to deliver a fiscal surplus.