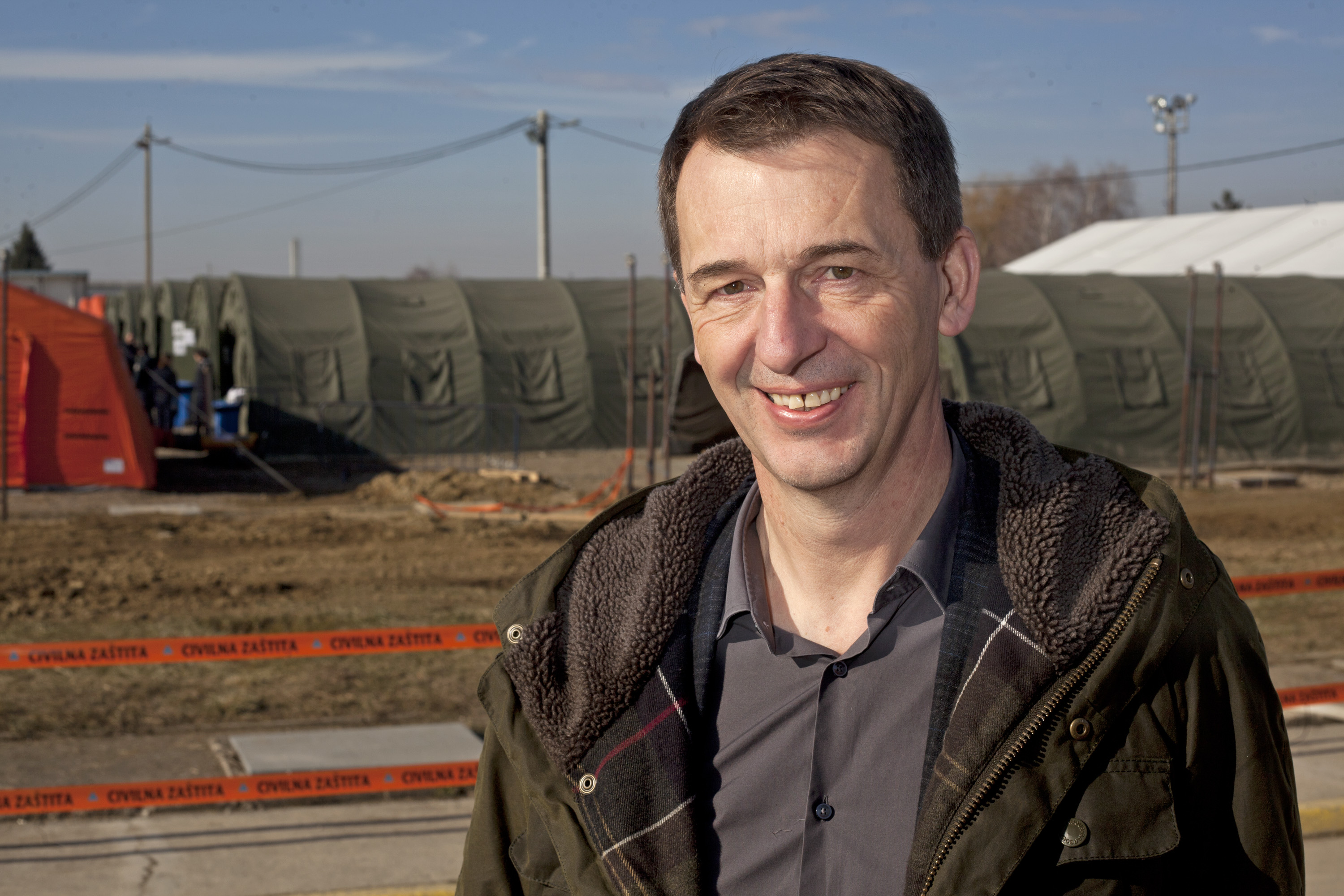 Over one million refugees and asylum seekers entered Europe in 2015, and over 100,000 entered in the first two months of 2016 alone, according to IOM estimates. What has the impact been on European aid budgets and policies? Camilla Burkot recently discussed these and related issues with Wolfgang Jamann, Secretary General and CEO of CARE International. Listen to the podcast here, and read the full transcript here [pdf]. For a condensed version of their conversation, read on.

Camilla: Wolfgang, what do you think the implications of the refugee crisis are going to be on European government aid?

Wolfgang: First, I think the fact that about one million people have found a place in Europe, found safety, is actually quite an incredible development. And I really hesitate to call this a ‘refugee crisis’, because at the moment it’s an incredible effort by a number of European countries to deal with the needs of those people. What’s happened over the last few years is more encouraging than anything else I’ve seen in my professional life.

Of course one needs to watch now how practically, in terms of capacity and some of the negative repercussions we’ve seen, Europe will deal with the continuous flow. These people need money. That is clear. They need material support. But the biggest discussion in Europe is not so much around, “Do we have enough money to help those people?”

One million people is a lot of people. But these are very rich countries that have shown that they can deal with crisis in an appropriate manner. Twenty-five years ago, Eastern Germany was integrated into the West German economy; that was 18 million people. In the mid-80s, several hundred thousand native Germans came from Russia, and the country was able to integrate them. So it is possible, but countries will have to think about how to make that happen.

Camilla: So in order to make that happen, do you think that more countries will start pulling money from their aid budgets to help cover those costs?

Wolfgang: We’re seeing some of that in the so-called ‘better’ or ‘good’ donors, particularly in the Nordic countries, which is particularly irritating. But I don’t think that is [out of] economic necessity. I think that is partly feeding into political agendas that come from the governments in these countries that have already moved into fairly conservative and restrictive positions, and it might well be that the refugee flow is being utilised to feed political agendas that are moving away from global responsibility, from providing a humanitarian response on a broad front.

[However, just a few days after this interview was conducted on February 23, the European Commission announced a new package of €700m over three years to support member states’ actions to address the humanitarian needs of refugees and migrants. Although this funding will be drawn from the general EU budget, and therefore does not technically change the European Consensus, it means that, in practice, the EU is starting to support member states, particularly those along the Western Balkans route, to provide humanitarian assistance within their borders.]

Camilla: Related to that, what’s your view about ambitions to address the problem at source, to send more money to Turkey?

Wolfgang: That is very visible at the moment. Obviously, the sheer number of refugees has overwhelmed the psychological ability, more than the material ability, of European societies to host them. So what you see is a combination of financial incentives, to Turkey in particular, and a number of mechanisms that are being put in place both within Europe and in the periphery of Europe – the Balkan states and in Syria itself and its neighbouring countries – to make it more difficult for refugees to move.

Turkey itself has closed borders to Syria. People are stuck at the borders. Not for long, they need to be helped, they need to be let through. But the ‘wave through’ policy is obviously over. All the countries that are involved – Macedonia, Croatia, Serbia, of course neighbouring countries of Syria, Libya – they’re all restricting the flow of people. It’s more complicated now for people in need to move from A to B.

Camilla: Do you think a sense that ‘this may be the last chance’ is the reason why we’re seeing so many people coming across in the last couple months?

Wolfgang: That’s a good question. The initial impulse, about a year ago, was reacting to a lack of perspective in the refugee camps, where people were hanging around for two or three years, and then of course the World Food Program suddenly not having enough money to feed them.

So then people start moving and then people realise it’s not that difficult to move, or maybe the risk that you take can be calculated vis-a-vis the benefit that you may get. So then it turned out to be – I don’t want to underrate, of course people die on those routes – but a fairly manageable route, and then of course more and more people come. And then your point comes in: how long will borders be open? 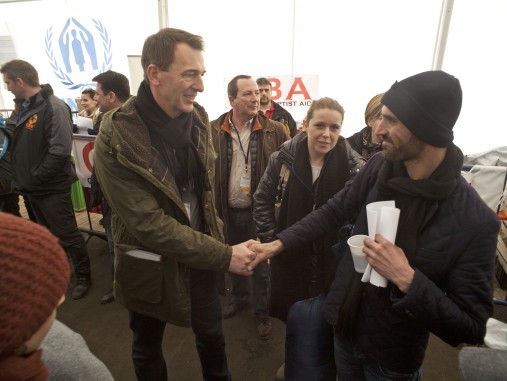 That’s why, at the moment, many families are moving, many women with kids. I was in Croatia and Serbia a couple of weeks ago, and you see many more family members trying to find either their husbands or young men that went first, with the notion that “How long will that be possible for us? So we’d better move now.” At the moment, the passage over the Mediterranean is a bit cheaper as well. That’s why women and children are now coming. They’re taking that risk and they might realise it might not be possible after a while.

Camilla: What do you think about the ‘Mideast Marshall Plan’ that some leaders are now advocating for – is that a useful model?

Now secondly, even if you have stabilisation, you will still have millions of people in dire need. These people need not just humanitarian help, but we need to find a way to give them back their perspectives in life. The average refugee has spent about 17 years outside their country – that’s not just Syria, that’s an average global figure. But the people who run away from Syria, they’re not used to sitting in a tent. They’ve been architects, lawyers, professionals, and they need to have some kind of different perspective, otherwise they will try what they’re doing right now: moving to a safer and more conducive environment. So the international community will have to think hard about giving those people a different kind of perspective, not just a heated tent for the winter.

The third piece is the Marshall Plan that we need for our own societies. Some societies in Europe have not been very successful dealing with migration. Look at France, for instance. You have the banlieues, the people from Northern Africa that have formed a parallel society, which is not conducive at all. Some other countries, like Germany, have been fairly untouched by migration.

These societies need to get used to the fact that this is a globalised world. We have to do away with some notion that there could be havens of peace, prosperity and stability, untouched or affected by all the trouble that is out there, trouble that to a certain extent we cause with some of our own failed policies.

Camilla: What impact do you see the refugee situation having on private giving to NGOs like CARE, and on the work CARE undertakes?

Wolfgang: In Germany, we recently asked a representative sample of our donors, “Should we work with refugees back home [in Germany] and not just in Syria or surrounding countries?” And about 70 per cent of our donors have told us yes. So we’re taking that up now and of course we’re counting on the donors to support us in that endeavour.

I think it’s too early to say whether that will affect the private donations that we need and receive for our work overseas, which is still our core business. But I think what is appreciated is that the refugee scenario, or migration, or however you want to call it, includes a fairly long journey from a place where people start, where they don’t live in a satisfying situation – whether that is caused by war, poverty, drought, whatever – through a fairly complicated, dangerous and difficult route to a destination. We as aid agencies need to find ways to assist people across the whole spectrum, including improving the situation in the places where they live, but also helping them on the way, and then trying to play a role in the places where they go.

Camilla: Lastly, the World Humanitarian Summit is coming up in May this year. How you would like to see refugee issues figure into those discussions?

Wolfgang: We have to be cautious that the Humanitarian Summit does not become a refugee summit. Humanitarian crises happen at various levels – I mean we just had a cyclone in Fiji, the biggest ever recorded in the area. We have a global drought/flooding scenario due to the current El Niño, which is affecting 60 million people.

We have about 60 million people on the move, and we have maybe 30 or 35 fragile states, fragile societies which are either badly governed, which are resource poor, which are in all kind of different types of trouble, and people are not being served in those countries by those who should help them – their own governments.

So our humanitarian work needs to deal with a high level of complexity at the moment, and it’s becoming more complex. I would hope that we’re not just talking about refugees at the Humanitarian Summit, but take a broader picture and look at how humanitarian aid is asked to contribute in a bigger, more significant and higher quality manner as well. Unfortunately some of these situations have come to stay, so we need to get used to this as well.

Camilla Burkot is a Research Officer at the Development Policy Centre. Dr Wolfgang Jamann is the Secretary General and CEO of CARE International.

Dr Wolfgang Jamann is the Secretary General and CEO of CARE International.