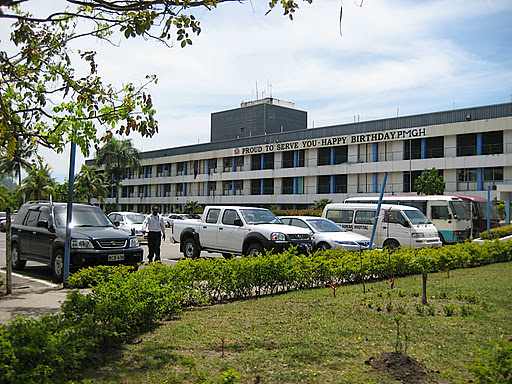 The Prime Minister of PNG publicly decries the state of PNG hospitals, and regularly approaches his near neighbor Australia for help to improve them. The poor state of PNG hospitals is a consequence of a long slow deterioration of infrastructure, and weakening governance and management. Initially hospitals were made delegated functions when decentralization was first implemented, and were then re-centralized, followed by a well-intentioned, but insufficiently thought through move to place them under independent Boards reporting directly to the Health Minister. Port Moresby General Hospital, the leading tertiary referral hospital in PNG, arguably is not of a standard that the government, the medical and nursing fraternity nor the general public find acceptable. The highly motivated Board have recently appointed an expatriate hospital manager to try and turn the trajectory for the hospital. Will this be enough? Or is more radical surgery worth considering? Let us at least pose the question, so that it can be debated publicly. Can PNG do what Lesotho did to turn its tertiary referral hospital around – radically, decisively and very much for the better?

What did Lesotho do?

Lesotho, a small mountain kingdom, surrounded by the Republic of South Africa was confronted with decaying and low quality publicly run hospitals. The flagship hospital of the health system was the Queen Elizabeth II (QEII), the country’s 100-year-old only national referral hospital, located in the capital Maseru. A legacy of British Colonial rule, QEII was crumbling, consuming increasing amounts of the government budget, and delivering poor and deteriorating services.

Rather than repeat the failed investments of the past, the Minister of Finance, Tim Thahane, decided to experiment with a radical new idea. What would happen, he asked, if we offered the private sector the same amount of money we spend today on this run down public hospital? What could they offer us? Could we get better quality and better services for the people of Lesotho, at the same price?

The answer has been a resounding yes.

A Public Private Integrated Partnership (PPIP) is an innovative PPP in which the government enters into a long-term contract with a private operator to build, design, operate and deliver a full range of clinical services to a population. This model harnesses private capital and management expertise, while retaining public ownership and oversight of health services. Experience in other countries, particularly in Valencia, Spain, has shown that the model can have a significant impact on the quality and efficiency of health care. [1]

But can this work in a low-income country? Lesotho’s example is instructive.

Given that it had to make a major infrastructure investment on QEII, the PPIP solution met all of the government’s key policy goals by:

Working with the International Finance Corporation (IFC) as transaction advisors, the government issued an open international tender which posed a challenge to all bidders: for the same level of expenditure as QEII, how much more could the private sector deliver in quality, breadth, and volume of health care services?

After a formal and transparent bid process, the Tsepong Consortium was awarded an 18-year contract to build a 425-bed hospital linked to three primary clinics, offer a full range of secondary and tertiary care (some of which had previously been referred to South Africa); integrate hospital services with primary care for Maseru; and make a major commitment to enhancing the limited human resources capacities of the country. As in all PPIPs, the government retains ownership of the assets, and the facilities must provide services to the population originally served by the public facilities, at no additional cost to patients.

Tsepong is jointly owned by Lesotho doctors, who also provide specialist services to the hospital; doctors and specialists from South Africa, a local firm for Basotho women, members of the local chamber of commerce, and Netcare Limited, a South African hospital management firm, and a South African private health care provider.

The new arrangement represents a major shift in role for the Ministry of Health from a provider to a purchaser of care, with responsibility for improving value for money and quality of services provided to the people of Lesotho. To assist the Ministry of Health in this unfamiliar role, an Independent Monitor has been appointed to measure compliance with the detailed performance indicators specified in the contract and to assess associated penalties for not achieving performance levels. Indicators cover a full range of clinical service quality, equipment, drug supply management, information technology, and staff certification and training. For example, 85% of patients with a provisional diagnosis of myocardial infarction must receive aspirin within 30 minutes of evaluation; and the fully automated medical record system must be up and operational at least 99% of the time.  In addition, after an initial stand-up period, the hospital is required to obtain accreditation by the Council for Health Service Accreditation of South Africa.

And what about the money?

The PPIP structure provides for co-financing of capital expenditures for construction, refurbishment and equipping the hospital and associated clinics; and also provides for an ongoing payment from the government to the Consortium for service delivery at the facilities. Both repayments are contained in a single unitary payment. This payment did not begin until after the hospital was opened and started seeing patients. This was 3 years after the contract was signed. All upfront expenses were covered by the Consortium.

Under the contract Tsepong provides almost 30% more hospital admissions and 87% more outpatient visits for an estimated 7% increase in operating costs over Queen II. If service volumes exceed contracted amounts, additional fees are paid to Tsepong, but the government must approve these increases. Under this payment structure, the government is basically contracting for a fixed volume of  patients (inpatients and outpatients). This volume based payment structure, has not been without its problems, and the cost of the additional public activity has been a source of some tension between the government and the operator.

This is not the only payment structure option for a PPIP and it is worth looking at how other countries have dealt with payment structures differently. In the Turks and Caicos for example, the operator is paid on a capitation basis, similar to the Alzira model in Spain. This model has some advantages as it incorporates a broader healthcare picture which includes primary care, rather than the traditional “let’s build a big Hospital” approach.

The way it is now

The clinics and hospital were completed on time and on schedule. After one year of operation in the new Queen Mamohato Memorial Hospital, maternal mortality has decreased by 50% despite treating much more complex cases. Overall patient mortality decreased from 12% to 7% and there has been a large increase in patient satisfaction. A range of clinical capabilities have been established for the first time in Lesotho, such as neonatal intensive care, thus saving lives and reducing expensive referrals to South Africa. A fully electronic medical record and reporting system has been implemented to allow detailed performance monitoring on a large set of quality and service indicators.

A key objective of the government was to increase human resources capacity in the country. There has been extensive training of physicians and nurses. Previous shortages of doctors and nurses have been addressed through international recruitment and the return of Basutho professionals to the country.

The tangible increase in quality, service and facilities has come at a price. In the first year, the hospital surpassed its negotiated volumes. The PPIP represents an island of excellence in a sea of mediocrity. In the longer run, the strengthening of other parts of the health system (including district hospitals and outlying health facilities) remains a priority, so that patients will not need to travel to the capital to get quality care. But, given the previous state of affairs, this is a good problem to have.

This approach could be an option worth considering in PNG. However, it represents a significant change in mindset for PNG and the generally accepted view of how the health system operates. PNG has a tradition and comfort level with government-owned and operated hospitals. To follow Lesotho would mean that the government would need to make a paradigm shift from “provider” to “steward” of the health system. This would require both new skills, and a new way of understanding the  government role in ensuring health services are provided – but not necessarily providing them.

We expect that such a transition from a publicly owned and run hospital to a PPIP such as in Lesotho would be challenging. Doubtless, opposition politicians will accuse the government of privatizing the health care system, even though all facilities remain in public ownership. Most likely, trade unions would object. Initially, doctors with entrenched interests in the old ways may resist the change. But experience suggests that they quickly become converts once they experience the greatly improved working conditions and clinical opportunities.

These problems can be overcome but they require strong and bold political and technical leadership.

The fundamental driver of change is an unequivocal recognition that the current system is broken and that further investment will not fix it. Something new is needed. Public hospitals in Papua New Guinea are an extreme example of the inability of the post-independence period to maintain the standards that should be enjoyed by the population. Despite the best efforts of many and funding from government and donors alike, hospitals continue to under perform. If you keep doing as you have always done, you will get what you have always had… a new solution is needed.

The experience of Lesotho needs at least to be on the table and in the public debate. We believe that it is possible to change the discourse on hospitals in PNG – but is there the political will and courage to accept the radical surgery to do so?

Neelam Sekhri Feachem is the CEO of The Healthcare Redesign Group Inc. Jane Thomason is the CEO of Abt JTA.
Information about the Lesotho PPIP is taken from: The Global Health Group, University of California San Francisco; and PWC, 2013, “Health system innovation in Lesotho: design and early operations of the Maseru public-private integrated partnership.” Healthcare public-private partnerships series, No. 1. Available here.

Neelam Sekhri Feachem is the CEO of The Healthcare Redesign Group Inc.