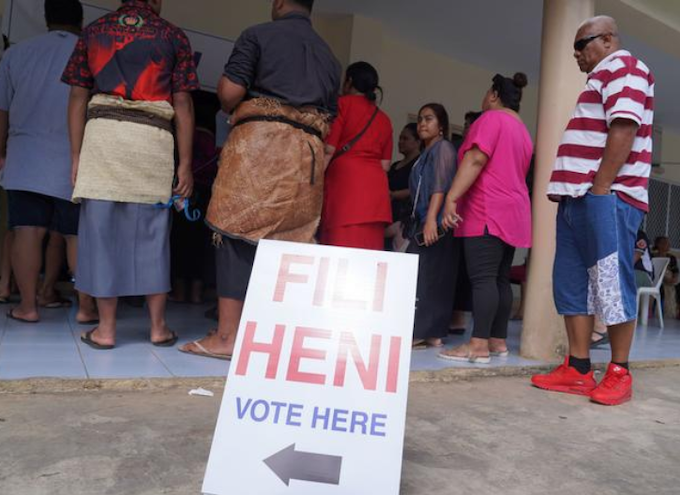 Tonga went to the polls on 18 November 2021 and rejected over half of the 17 People’s Representatives (PRs). Amongst them was Siaosi Pohiva, the son of PTOA’s former leader and Tonga’s former prime minister, the late ‘Akilisi’s Pohiva. Siaosi held Tongatapu 1, the seat his late father held until his death in September 2019. His defeat, by businessman Tevita Puloka, a close relative of the King, brings to an end ‘Akilisi’s political legacy.

The pain of electoral loss for Paati Temokalati ‘Otumotu Anga’ofa (PTOA) was amplified by the defeat of ‘Akilisi’s son-in-law Mateni Tapueluelu in Tongatapu 4 by Tatafu Moeaki, an un-elected MP and minister for economic development in the last parliament. Like his brother-in-law, Mateni came second by a huge margin. PTOA, which was split by infighting, lost five of its MPs, retaining only three. They are Semisi Fakahau, Veivosa Taka and Saia Piukala.

Prime minister Pohiva Tu’i’ onetoa, leader of Paati ‘Ae Kakai, is amongst the sitting MPs who have been re-elected. It remains to be seen whether he will have the numbers to form government and be re-elected prime minister. He will definitely face leadership competition from Siaosi Sovaleni of Tongatapu 3, former minister for education.

Siaosi, a very popular MP in his constituency, obtained 83% of the votes cast, the highest by any candidate in this election. A third term MP and seasoned politician, he is emerging as a leader of a group of elected MPs. They include newly-elected PRs Tatafu Moeaki, Sevenitini Toumo’ua and Sangster Saulala. Tatafu was a non-elected parliamentarian and a competent minister for economic development during his short one-year tenure.

Sovaleni’s group may be the power-brokers and could assume political leadership if they side with the Nobles’ Representatives to form government.

The 33 noble title holders and life peers elected nine Nobles’ Representatives of whom three are new, namely Lords Vaea and Fohe from Tongatapu and Lord Fotofili from Niua. 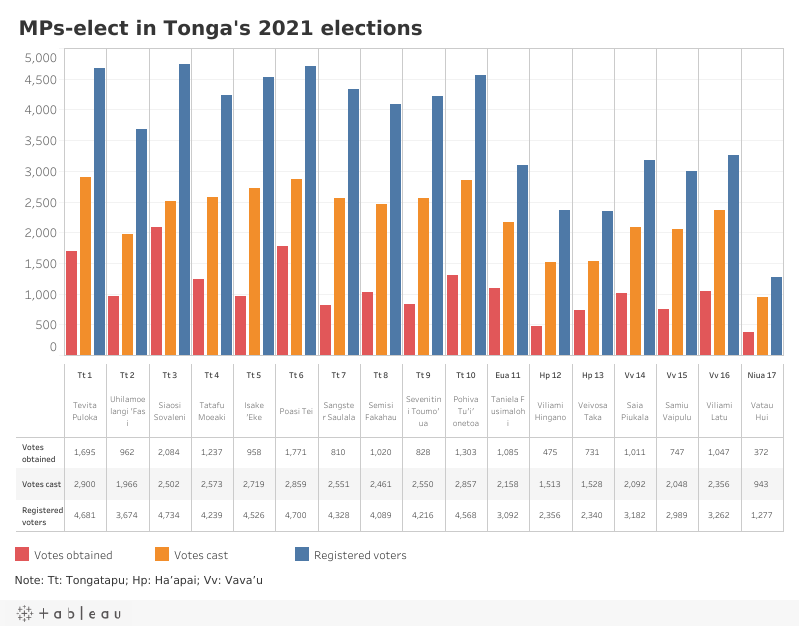 Recounts may be expected from at least two constituencies – the Eua 11 and Vava’u 15 constituencies where candidates won by narrow margins of votes. Incumbent Samiu Vaipulu, the longest serving politician, won by eight votes. He polled 747 votes to 739, ahead of Keuli Lavaki. Taniela Fusimalohi defeated incumbent Tevita Lavemaau by 23 votes for the Eua seat.

Voter turnout was low at 62%. Only 38,550 voters out of the 62,253 registered voters turned out to cast their vote. Participation in elections has declined since the 2010 general election from a high of 91%. In this election some voters were mistaken in assuming that having a national identification card automatically enrolled them in the electoral roll. 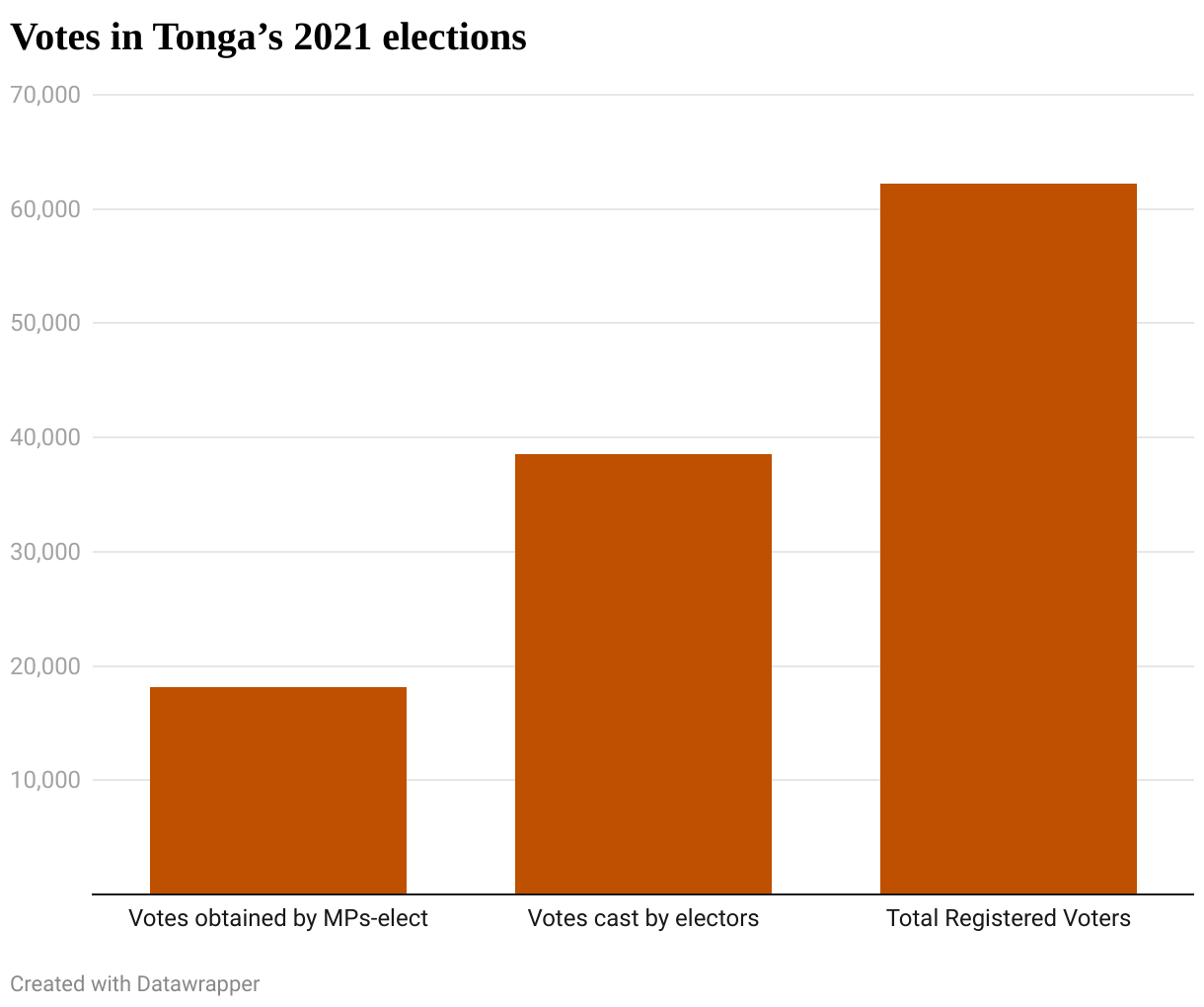 Writs will be returned on 2 December and parliament is expected to sit within 14 days of the return of writs. With elections done and dusted, the lobbying for forming government and prime minister will now intensify. The nine Nobles’ Representatives who have always been unified and stable as a group will be pivotal in the formation of government. PTOA now appears to be relegated to the role of Opposition unless it aligns itself to a group that’s emerging to assume political leadership.

It would appear that Tongans have had enough of and are now fatigued by the polarising politics of PTOA while in government. In-fighting in PTOA did not help. Essentially, PTOA self-destructed and caused its own demise. Independent candidates like the group led by Siaosi Sovaleni will probably associate with the Nobles to form a government of convenience. Royalty did not win this election. PTOA and Tonga’s pro-democracy forces lost it.

Henry Ivarature’s research is undertaken with the support of the Australia Pacific Security College, funded by the Department of Foreign Affairs and Trade.

Ema Ivarature is a freelance researcher who has degrees in law and politics from Victoria University of Wellington, New Zealand, University of the South Pacific and The Australian National University. She was formerly Assistant Legislative Counsel at the Tonga Legislative Assembly.