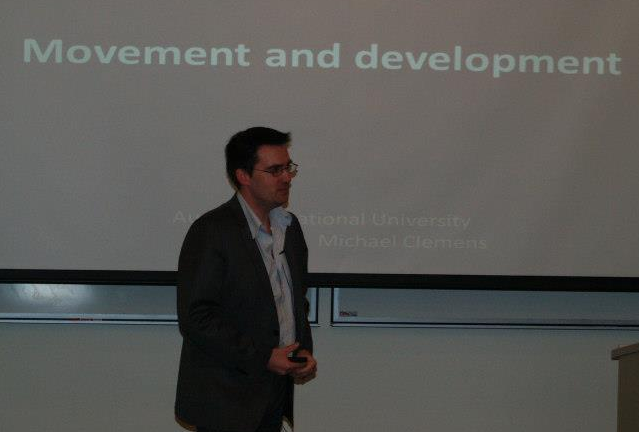 Michael: The thing that interests me about both of the Seasonal Work Programs, Australia’s and that in the U.S., is that they are a form of development program.

The U.S. program is much older than Australia’s. It started in 1943 by bringing in Jamaican workers to replace guys that had gone off to fight in World War II. It was conceived as a way to fill labor shortages in the U.S. It was the only kind of development program, yet absolutely nobody thinks of it that way now. But the recent access of Haiti to the program is an interesting example of how it can be a development program.

Three years ago last Saturday, Haiti had this cataclysmic earthquake. The economy was wrecked even more than before and we at CGD pressured the U.S. Government to extend its Seasonal Worker Program to Haiti. Why did we do that? Because each person from a very poor country like Haiti who comes to the U.S. to work on a seasonal work visa is multiplying their earnings by something like fifteen times.

It’s important to keep in perspective what conditions are like in countries of origin like Haiti. Before the earthquake, most of Haiti would have earned $1.00 per day at U.S. prices. So getting $9.70 per hour to pick cucumbers is the opportunity of a lifetime. The huge majority of that money among typical seasonal workers in the U.S. gets remitted home. It creates all kind of opportunities for business development in communities, schooling for kids and general economic development, because most of it is spent on locally produced goods and services.

Stephen: One thing you said in your talk that struck a chord with me was that the scheme in the U.S. is very bureaucratic. Employers often make that criticism of the Australian scheme.

Michael: It’s really a highly-regulated, overbearing program, with lots of forms to fill out. If you check one box wrong you can be set back months. Then the growing season starts and you don’t have workers. Employers complain bitterly about it. And in large parts they simply don’t use it. In North Carolina there are something like 130,000 or 140,000 manual agricultural laborers and the vast majority of them are immigrants. Something like 5% are coming in under the legal Guest Work Program. Almost all the rest are black market.

I believe the statistic in California is lower, much less than 5%, something more like 1-2% of the manual agricultural laborers are legal guest workers. So employers absolutely despise this program.

Michael: There are two pet peeves I have about this question of how much skilled versus how much unskilled migration. One is for destination countries and one is for origin countries. The conventional wisdom around the world — sometimes seen in rhetoric, sometimes embodied in policy (like point systems) —  is that skilled migrants are always better. It’s difficult for me to understand, as the descendant of exclusively unskilled immigrants (there were no PhDs in my family tree arriving in the United States), why it is only skilled labor that is needed to build the U.S. economy. You need lawyers and you need people taking care of the lawyers’ children when they’re working 80 hours a week as a lawyer. You need physicists and you need people building the buildings that physicists work in. Different kinds of labor are complementary to each other. Low skill workers are tremendously valuable, and I would have a very difficult life without them.

For example, you can mitigate some of the effects that people are legitimately concerned about with regard to skilled worker migration by innovation in how people finance their education. One of the biggest concerns about skilled worker migration is that lots of developing countries have heavily subsidised tertiary education, and that when those people move, the money goes with them.

So you have a nurse trained in Malawi at a public nursing school at an average cost of $20,000 to $25,000. She takes that subsidy with her when she goes to London and Malawi has lost money. My pet peeve is the idea that the only way to fix that situation is to block her from going. And this is the kind of coercive policy that is embodied in the British National Health Service’s refusal to recruit African health workers.

There’s another way to deal with that situation. It’s about offering opportunities to people who migrate to pay for their own education. It’s something which is beyond economically feasible. There’s no problem earning U.S. $20,000 or $25,000 working as a nurse in the U.K. In a couple of years, you can earn that money and pay for your own education. What’s lacking is the mechanism for that to happen. I wish there was more thinking about policies that would shape migration to fit a world that is expecting migration to happen, rather than polices (like recruitment bans) that seem to wish for a world with no migration.

Michael: Absolutely. The U.S. Seasonal Work Program is a perfect example of this. The U.S. has a giant need for low skilled labor if it is to keep an agricultural sector. If it just wants to lose the sector, fine. If it doesn’t, then it needs manual picking labor. It currently has such a poorly-functioning legal mechanism for that to happen, that farmers just go around it.

And I sympathise with farmers. They need workers and they want to stay in business and it’s very difficult to use the program that exists. These difficulties are an embodiment of the idea that it’s fine to have a Guest Worker Program that is giving something like 50,000 agricultural guest work visas a year when the demonstrated need by U.S. farmers is actually orders of magnitude more than that. That’s not fine.

A minimal recognition of U.S. farmers’ need for that labor is the kind of thing that would proceed from a balanced understanding of how much skilled labor and how much unskilled labor we need. And we’re very, very far away from that kind of enlightenment.

Stay tuned for the second installment of this interview, a discussion of fostering skilled migration and the Australian Pacific Technical College.