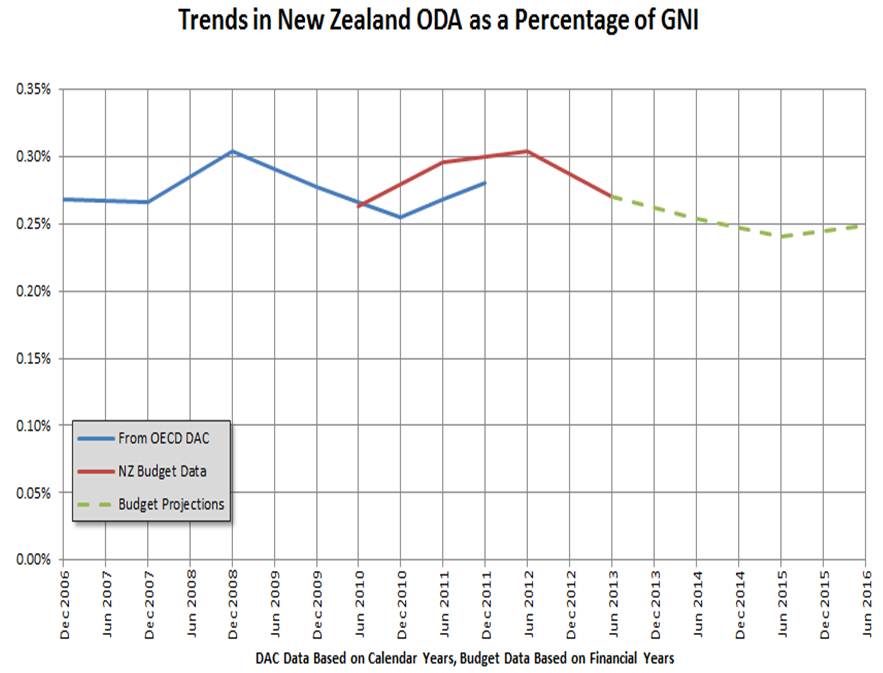 For a long time, New Zealand, along with other anglosphere donors like Australia and the UK, was an aid quantity poor performer. An OECD country that fell well short of the aid target of ODA as 0.7% of GNI. Around 2006 this started to change somewhat, with the government of the time committing to aid increases which, while not dramatic, did set New Zealand on a path towards a slightly better place in the aid world. Positive trends also commenced in other parts of the anglosphere at similar times.

Yet unlike Australia and the UK at least, this trend of improvement has now come to a resounding halt in New Zealand

In a recent blog post Jo Spratt provided an assessment of the most recent New Zealand government budget and what it means for New Zealand Official Development Assistance. To add to her post I have created some charts detailing aid trends and locating New Zealand amongst other donors. In doing this I’ve drawn from indicative numbers that were provided to New Zealand NGOs by MFAT, OECD DAC data and information from New Zealand’s Treasury. You can download the charts, along with information on their construction and the source data used here [PDF].

A summary of some of the charts is provided below.

This chart shows actual and projected New Zealand government Official Development Assistance amounts in nominal New Zealand dollars. Most of the data comes from Treasury with additional information drawn from provisional information provided to NGOs by New Zealand’s Foreign Ministry (MFAT). Treasury data allows for a breakdown of total aid into programme aid and overheads. For the last 3 years of the chart, which are based on MFAT information, this is not possible.

As you can see, in absolute dollar amounts, New Zealand aid levels effectively stand still over the next few years. In fact, from a first glance it actually looks as if New Zealand aid is being reduced next financial year. This isn’t quite the case, as Jo explained in her post. The apparent decrease is actually the result of an artificially high aid spend in the 2011/12 financial year, which occurred because that financial year was the final year of a multi-year budget allocation.

Also worth noting is a budgeted fall in aid overheads of almost 10% over the coming financial year. This may seem like a good thing, but it is not for reasons that I outline in an old blog post here.

This chart projects New Zealand Aid as a Percent of NZ GNI. Two data series are used: one being the OECD DAC’s ODA/GNI data, the other is Treasury data (augmented for the last two years by aid spend information provided to NZ NGOs by MFAT). As you would expect given the trend in dollar values above the trend in percent of GNI is one of slow decline.

The third chart shows NZ’s aid as a percent of GNI compared to other OECD DAC donors. As ever New Zealand languishes towards the bottom of the field, although it’s relative position may improve as some other countries cut their aid budgets heavily in coming years. If you are interested you can see the 2011 figures compared to 1999 percentages here.

As I said at the outset of this post New Zealand’s aid stagnation stands in contrast to ongoing improvements in Australia and (most dramatically) in the UK. Which leads to an interesting question: why the difference?

In Australia’s case the answer is perhaps simply that Australia hasn’t experienced fiscal stress as severe as the UK and New Zealand have. The ostensible reason offered by the New Zealand government for avoiding further aid increases is the impact on the government books of the earthquake in Christchurch and the need to return New Zealand government finances to the black. However, this isn’t entirely convincing. The UK was hit very severely by the financial crisis and, despite it’s deficits, it has managed to continue to increase aid. And in the New Zealand case, if balancing the budget was really a core issue, the National Government could have simply rescinded its earlier tax cuts.

Whatever the cause, one thing is clear. New Zealand will remain an aid Scrooge for quite some time yet.