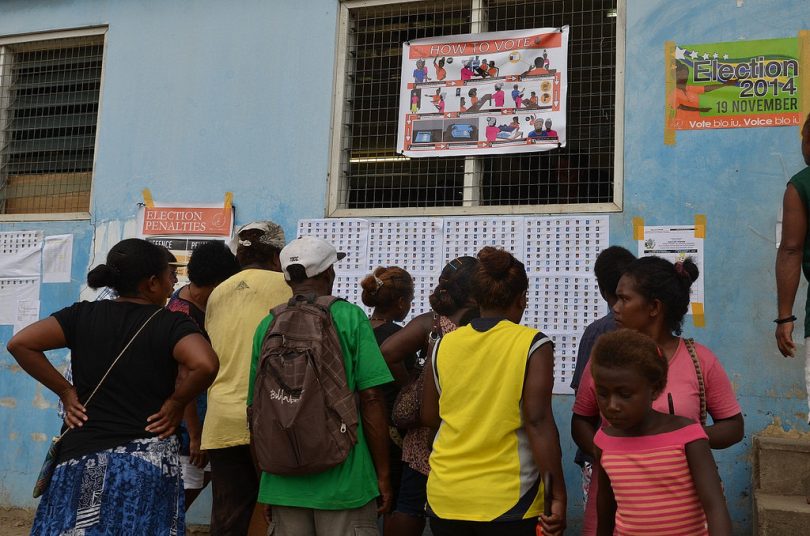 A photo from the 2014 Solomon Islands elections (Credit: ramsi_images/Flickr/CC BY 2.0)

Solomon Islands is expected to hold national elections in March 2019, the first since the departure of the Regional Assistance Mission to Solomon Islands (RAMSI) in June 2017. This blog highlights a number of issues to look out for as the country steps up electoral preparations.

Becoming a member of parliament (MP) in Solomon Islands brings with it access to substantial financial resources, and national elections herald a time of intense politicking as aspiring MPs jockey for office and the accompanying benefits. While there appears little risk of generalised election-related violence, there is always potential for localised conflict. In the past, disgruntled candidates have damaged polling stations and supporters have engaged in brawls. Following the 2014 election, a boat used by politicians from a particular political faction was damaged by gunshots just before a parliamentary vote to form government. The May 2018 Gizo-Kolambangara by-election was notable for its intensive campaigning.

Historically, elections in Solomon Islands have seen high turnover rates with around 50 per cent of incumbent MPs losing their seat. This has bolstered a perception that politics in Solomon Islands is inherently unstable and meant that observers have looked to elections for signs of political stabilisation. The 2014 national election was an electoral outlier for its significantly lower incumbent turnover rates, with 74 per cent of sitting MPs returned. It is unclear why this occurred, but it may have something to do with the large constituency development funds provided to incumbent MPs during the previous parliament. For the coming election, sitting MPs will have had access to about US $1 million a year. To put this in perspective, the median electorate in 2014 had just 5,391 registered voters. Many MPs have used these weakly-regulated funds to try to consolidate their power. It will be interesting to see if this provides an incumbent advantage, with lower parliamentary turnover becoming the new normal.

The 2014 elections saw only one woman elected — Freda Tuki. She was joined by Lanelle Tanangada following the Gizo-Kolombangara by-election. Tuki eventually lost an electoral petition in October 2018, which led to her losing her seat. But with both women in parliament (two out of 50 MPs), Solomon Islands had more women MPs than at any point previously. Whether women will do as well, or even improve their representation, in the 2019–23 parliament remains to be seen. Expectations of a more moneyed politics suggest it will be difficult for women to overcome already significant structural barriers.

Elections in Solomon Islands have always been a major administrative challenge given the country’s geography, great social and cultural diversity, and the resource and capacity challenges of delivering a complex logistical event in a low-capacity state. Recent elections, however, have run comparatively well.

Even so, Solomon Islands’ electoral authorities enter the final phase of this election cycle facing significant obstacles. At times, government support has been insufficient. Preparations for a credible election have been further complicated by the late passage of an electoral reform act in August 2017 that includes reforms to strengthen the office of the electoral commission and provides scope for procedural changes to the electoral act. Confusingly, some of the changes — particularly allowing people to cast votes in Honiara for rural electorates — will not be implemented this election.

One of the more notable changes coming into effect is the provision for out-of-constituency voter registration, with voters no longer needing to travel to a constituency to register to vote in it. The provision was designed to spare rural voters who live in Honiara the need to return to their electorates to register. However, it has had the unintended consequence of 54,000 voters changing their registration from one electorate to another, resulting in many seemingly credible accusations that voters are changing electorates without valid grounds for doing so (see here and here) and that candidates have been paying voters to register in specific electorates to vote for them. Threats have been made and concerns raised about the risk of violence if voters try to vote in electorates where they are viewed as outsiders. At the time of writing, the period of public objections against ineligible enrolments has just closed. Over 2,000 objections were made in Gizo-Kolombangara and nearly 1,500 in Central Honiara, the two electorates where objections were highest. Solomon Islands’ national news service has reported that all objections have to be assessed by 23 December. Whether this can be done adequately in the time available remains to be seen.

Another reform passed in the August 2017 electoral reform act was the abolition of serial numbers on ballot papers. Numbers were replaced with a new requirement that ‘the Commission must publish the final list of electors for each constituency showing which of the electors on the list voted in the election’. Removing the serial number from ballot papers may reduce the suspected ability of candidates to determine who voted for them, improving electoral integrity. But there seems no sound reason for publishing the names of everyone who votes in the election. While the list will not say who voters voted for, candidates will be able to use it to ascertain which of their supporters — whose votes they perhaps paid for — turned out to vote, eliminating the uncertainty of who promised to vote for them but did not vote at all. (Internationally, recent work on vote buying has focused on ‘turnout buying’, which involves paying probable supporters to turn out in instances when voter apathy, rather than rival candidates, is a major issue.)

Such issues place greater importance on the integrity of the electoral system, particularly the voter roll. Adoption of a biometric voter roll (BVR) for the 2014 election helped strengthen its credibility but was costly and difficult to administer. Updating the BVR only began in early September 2018. While the roll was updated for the Gizo-Kolombangara by-election, there were still a significant number of complaints, including voters finding themselves missing from updated rolls. This suggests problems with the process and/or public confusion about the BVR. If not addressed through a proactive awareness campaign, voting roll irregularities will likely result in electoral disputes.

This being the first post-RAMSI election, there will be considerable interest in how RAMSI’s absence impacts electoral arrangements. Many of the strengths of the electoral process in Solomon Islands stem from within the country, for example the diligence of many electoral officials. In 2018, the Solomon Islands Electoral Commission and Royal Solomon Islands Police Force signed a memorandum of understanding for electoral security, which is also encouraging. Yet since RAMSI’s arrival in 2003, the country has relied on significant donor electoral support, particularly in the form of technical assistance. This support has continued. However, one of the benefits of RAMSI was that electoral authorities could use its policing assets in the case of emergencies. This electoral subsidy was, in many respects, hidden, and it remains to be seen if current preparations fully account for the absence of a largescale international presence. With RAMSI gone, it will be particularly important that electoral authorities are fully prepared.

[Authors’ note: The passage on women candidates in this article was updated on 14/12/18 to correct a typo involving the date of the next parliament.]

This post was originally published as Department of Pacific Affairs (DPA) in brief 2018/26. It has been modified slightly since original publication to reflect current events.