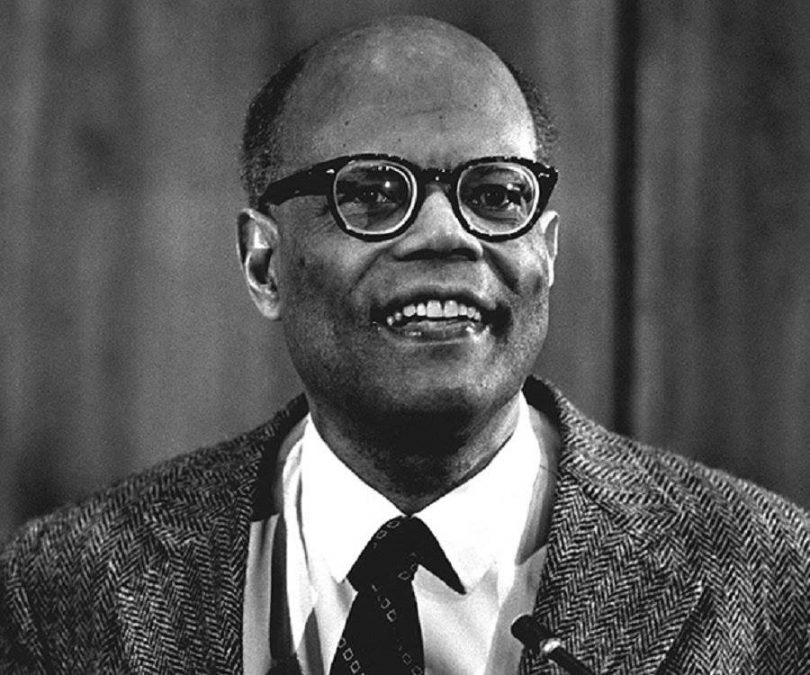 W.A. (Sir Arthur) Lewis, a descendant of African slaves who was born in the British West Indies in 1915, was awarded the Nobel Prize for Economics in 1979. I have been re-reading his 1955 book The Theory of Economic Growth. The Australian economist Fred Fisk, who wrote so much about Papua New Guinea and the Pacific, mentioned Arthur Lewis as an important influence. I also remembered that Lewis had a lot to say about what we now call the ‘informal economy’. My re-reading didn’t disappoint; returning to The Theory gave me new insights into a puzzle found at Pasar Skouw. This is a marketplace in Indonesian Papua I have written about before. I will return to these insights below.

The pasar (Indonesian for ‘market’) at Skouw is located in Papua Province, in the Republic of Indonesia (RI), just over the border from Wutung in Papua New Guinea’s Sandaun Province. Until the COVID-19 emergency Pasar Skouw had been galvanising economic activity on the PNG side of the border. Shoppers and informal traders from PNG were buying – at prices generally much lower than in PNG – a wide range of consumer durables, clothing, foodstuffs, alcohol and tobacco products. Some buyers were traders, purchasing for resale back in PNG while others were consumers, purchasing for their own consumption. As traders returned from Skouw their influence was felt in the Sepik provinces, into the PNG Highlands and as far afield as Lae.

Tok Pisin-speaking Indonesian traders at Pasar Skouw willingly accepted PNG currency in exchange for purchases. The Government of Papua Province provided currency exchange services to facilitate the market trade. Despite this, there were sometimes shortages of PNG currency in Papua. This was due to Indonesian demand for products – including vanilla, artisanal gold and forest products – exported informally into Papua from the Sepik side. The PNG sellers of these products demanded payment in PNG Kina. Although the border is now officially closed, this informal trade almost certainly continues through unofficial border crossings. While little is known about such exchanges they are likely to be personalised and clandestine rather marketplace-based. But since Indonesian buyers must have kina, the absence of eager PNG buyers at Pasar Skouw has probably increased the shortage of kina in Indonesian Papua.

Skouw is only 55 km from Jayapura, the capital of Papua Province with a population of about 320,000. This suggests that, when trading resumes in a post-COVID New Guinea, there will be scope for further expansion of the cross-border trade. If so, it will be important for authorities on both sides to clamp down on socially-undesirable elements of the trade. But while the political relationship between RI and PNG is always likely to be difficult, potential benefits for rural producers in PNG’s remote border region, and for PNG traders and consumers more generally, justify efforts to facilitate a mutually-advantageous system of cross-border trade.

One obstacle to a trading system maximising benefits for Papua New Guineans may lie in differences between Indonesian and Melanesian marketplace trading cultures. This is the ‘puzzle’ I referred to above. In the 1950s Clifford Geertz described how, in the Indonesian ‘bazaar’ (or pasar), prices were set competitively by bargaining between buyers and sellers. By contrast, at around the same time, Scarlett Epstein observed ‘producer-seller’ markets on the Gazelle Peninsula in late-colonial PNG. There, in what was considered the most ‘advanced’ district in the colony, bargaining behaviour was very largely absent. Epstein doubted the capacity of Gazelle Melanesians (the Tolai) to adapt any further to market economy, concluding that their modes of trading ‘[did] not seem to be transitional types’.

Today, after almost 70 years, evidence from Pasar Skouw suggests that some Melanesian market participants are still finding it hard to adapt. Speaking of visiting PNG shoppers, an Indonesian trader said ‘mereka tidak menawar. Berapapun harganya, mereka beli’ (‘They don’t bargain. Whatever price we ask, they just pay it’). With such situations in mind, W.A Lewis wrote that: ‘When people who have hitherto produced only for their own subsistence are first introduced to a price economy, their response is both limited and unskilled. They neglect opportunities; they do not know how to choose; they are easily defrauded; they do not sense the difference between temporary and permanent price changes; they do not know about seasonal and cyclical price changes; or about quantity discounts; and so on. One has to learn about how to respond to price changes just as one learns any other part of one’s culture. The performance improves as generations grow up who have always known and used the market, and who are experienced in its tricks.’

Lewis acknowledged this may be a painful process: ‘People take a long time to adjust themselves to a money economy; to learn to take advantage of opportunities expressed in money terms; and to learn how to spend or how to keep money when they get it. They need a new pattern of morality which may take a long time to be created; for they cease to live in a community where obligations are based on status; and move into one where obligations are based on contract, and generally upon market relationships with people with whom there are no kinship ties.’

In PNG around the year 2000, and in contrast to the earlier pessimism of Scarlett Epstein, Karl Benediktsson signalled the emergence of some entrepreneurial Highlander traders who were aggregating staple food crops and trading them over substantial distances – behaviour Lewis would have recognised as reflecting ‘contractual’ market relationships as much as ‘kinship ties’. More recently, Tim Sharp came to the conclusion that ‘overt competition and haggling, once conspicuous by their near absence, are now commonplace in the country’s betel nut marketplaces, and increasingly visible in many of the large urban fresh food marketplaces.’ On the face of it, these are promising advances if one wishes to see the institutionalisation of market processes in PNG society. But this ‘transition’ to market processes has so far involved relatively few commodities (especially sweet potato and betel nut) and relatively sophisticated (‘large urban’) marketplaces. Perhaps the ‘unsophisticated’ behaviour of PNG shoppers at Pasar Skouw, whose passivity so mystifies Indonesian vendors, is still representative of the majority of marketplaces in PNG.

No doubt PNG buyers and sellers will learn the robust art of bargaining in time, with benefits for the operation of marketplaces (and of ‘markets’ in the broader sense) in PNG. Lewis wrote of this as a transition in ‘moral values’. ‘Good behaviour in one society may be bad behaviour in the other’. People are slow to ‘appreciate…the extent to which moral codes are bound up with and appropriate to particular social and economic patterns’. Such ‘painful transitions’ are ‘inherent in the transformation of a society from one way of life to another’. In my recent book on the informal economy such situations are considered in terms of the primal encounter between Adam Smith’s ‘trucking and bartering’ (‘The Wealth of Nations’ 1776) and the world of Marcel Mauss’s ‘The Gift’ (1925). In Melanesia such encounters are as old as European colonialism itself.